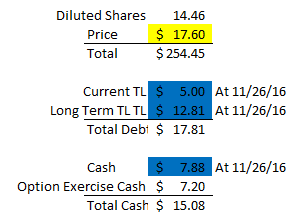 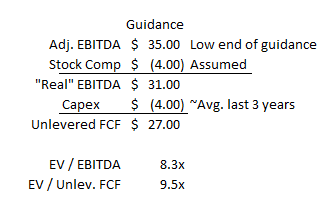 At today’s share price of $17.60, FC’s EV is ~$260m, so you’re paying ~8.3x EBITDA or 9.5x unlevered FCF based on those numbers. Not the cheapest company I’ve ever seen, but that’s relatively cheap for a company that should be have both growth and “predictability” tailwinds going forward as they switch to the AAP model and it (hopefully) raises LCV (FC thinks AAP is substantially increasing LCV, and points out that people switching to the model are both increasing their spend and renewing for substantially more revenue than they have traditionally spent).
Of course, there’s a “but” here, and that’s the company’s Q1 earnings. To put it simply: I thought they were awful. Now, if you listen to the company’s CC, they try to explain away all of the quarter’s weakness as simply an investment to get AAP going and some weakness in China. And I know some people who think “AAP showed continued signs of resonating with customers during the quarter, and that’s all the matters long term.” I get where both of them are coming from, but to me the quarter indicated serious signs of weakness in switching to AAP.
Here’s my biggest concern. Go to page 16 of their Q1’17 10-Q. Read through the “direct offices” line a few times. This is where almost all of their AAP sales are flowing at this point. Sales decreased by $2.4m during the quarter; however, there were a bunch of moving parts (deferred revenue increased $1.8m, a switch in China office ownership (from licensed to company owned) boosted revenue $2.2m, Japanese revenue was up $0.5m, UK revenue was down$1.1m). If I adjust for all of those numbers, I find that “apples to apples” revenue declined by about $2.2m, or almost 10%. Not great if you’re touting how much of a success AAP is going to be and how it’s reigniting your company’s growth.
Ok, maybe I’m reading too much into a relatively small revenue decline in one quarter. But all through the Q and the earnings call I saw signs that the model was having some issues. Here are some more things I noticed
Speaking of management not having a grasp on the numbers, they also publish their targets for their performance based awards in their 10-k (see p. 78) and 10-q (see p. 8). The performance based awards have 3 levels: a low end, medium end, and high end. If I’m just looking at the adjusted EBITDA target numbers, it looks like they’ve missed even the low end of their targets in each of the last 3 years (FY14, FY15, and FY16). This year, they’d have to come in above the midpoint of their guidance in order to hit the low end of their Adjusted EBITDA award goal of $36.7m. Needing to hit a goal you’ve missed 3 years in a row doesn’t exactly give you confidence the guidance can be hit, and missing even the low end of targets 3 years in a row doesn’t give you confidence management or the board have a great grasp on the business.
Now, some people might push back that it’s really short term oriented to base your conclusions on how the business model switch for an entire company is going based on one quarter’s results. But I don’t think it’s too crazy to analyze the results of these quarters very closely; this year is when the first set of AAP renewals pour in and poor results while they do so can be a sign that the transition isn’t working. And if the model switch doesn’t work out, the results probably aren’t going to be pretty for FC shareholders: this is an asset light company w/ 15%+ EBITDA margins and >60% gross margins, so any weakness is going to result in massive operating de-leveraging and probably a whole lot of downside.
Ultimately, an investment in FC comes down to one thing: do you think the switch to AAP will create long term value, or do you think the switch is going to be somewhere between “bleh” and a disaster. If the former, the stock will do really well from here. If the latter, the stock will do somewhere between poorly to awfully.
And, despite the weak Q1 and muted growth (see “odds and ends” section for more on that) over the past few years, I just can’t help but look at FC and think that there are tons of signs that management is right and the switch is creating value. I’ve put some of the things management likes to highlight as evidence the switch is creating value in the “odds and ends” section at the bottom of this post. All of them are interesting, but the thing that really interests me is the company’s sales force: they’ve increased it from 192 people in last year’s Q1 to 216 people in this year’s Q1. And if you go check out their website, you can find a ton of job postings (particularly for their education division, which I haven’t really focused on here but seems set for continued strong growth).
I’ve been burned before by investing in companies ramping up their sales force and thinking it was a sign that a growth / expansion plan was going well (turned out it was just a sign of management over-optimism and incompetence), so I suppose those jobs numbers should be taken with a grain of salt. But when I look at the hiring ramp, the signs of AAP success that management is highlighting, and my own personal views of the AAP value add versus the old process of selling one course at a time, I just believe that the AAP switch is creating value and shareholders will be rewarded over time as that becomes more clear to the market.