In this blog’s first post, I wrote up Shoretel (SHOR; disclosure, I’m long). I’d encourage you to check out that post for a bunch of background on the unified communications (UC) space, but the basics are the whole space is undergoing a secular shift from having phones run internally / putting equipment in your closet to having phones run over the web through a monthly subscription (unified communications as a service, or UCaaS). At the forefront of that shift are players like RingCentral (RNG) and 8x8 (EGHT).
Probably right behind RNG and EGHT in the small business UCaaS race is Vonage (VG; disclosure, I’m long but much less than SHOR), the company I’ll be talking about today. Vonage represents the type of company I have found myself struggling the most with: a company with a fantastic management team that doesn’t trade at a material discount its quantitative value. When you find one, what do you do? Do you just hold it and trust in the management team? Do you sell when it hits fair value? I don’t know the answer, but we’ll get to all that after an overview (I hinted at it in my post on Tucows (TCX) Monday, but I’ll probably have a post coming in the near future discussing the topic more).
Many of you may know Vonage from its legacy consumer product (the CEO frequently mentions how people remember them from their “Woo-Hoo” commercials). That’s where Vonage got its start: providing a traditional landline phone product using the internet to deliver the phone instead of paying for a separate line from your phone company (i.e. AT&T). This segment is slowly dying as more and more people shift to only paying for a cell phone and traditional cable / phone companies just bundle the phone into their “triple play” packages; however, the segment throws off gobs of cash while it dwindles into nothingness.
Vonage saw the writing on the wall (consumer phone segment would eventually decline to nothing) and acquired a company (Vocalcity) that expanded them into the Business segment, and that segment is now where all of Vonage’s growth is coming from. Vonage accelerated their shift to business in late 2014, when they hired their current CEO (Alan Masarek) from Google with a clear mandate to continue to grow the business / UCaaS side. Masarek has dramatically cut costs on the consumer side, which now throws off gobs of cash that he has used to fund acquisitions to grow the business side.
Until the middle of last year, the business segment was 100% UCaaS focused (providing business telephone over the cloud, similar to RNG and EGHT). But last year, Vonage acquired Nexmo, the second leading player in the communications platform as a service (CPaaS) space (basically, the space allows messaging and phone calls in apps; like when you can send a text message to your uber driver through the uber app) for $230m, so now their business segment is a combination of a play on the CPaaS and UCaaS segments.
The “use cash to grow the UCaaS” strategy has been quite successful. The segment is now growing at 20%+ organic growth rates, and they’ve found strong synergies in acquiring smaller players and bolting them on to their platform. Vonage has also noted that they spent over $2B in advertising to build the Vonage brand when they were focused on the consumer side, and that advertising created a strong brand awareness that they think gives them an edge when selling against other small business focused UCaaS players. 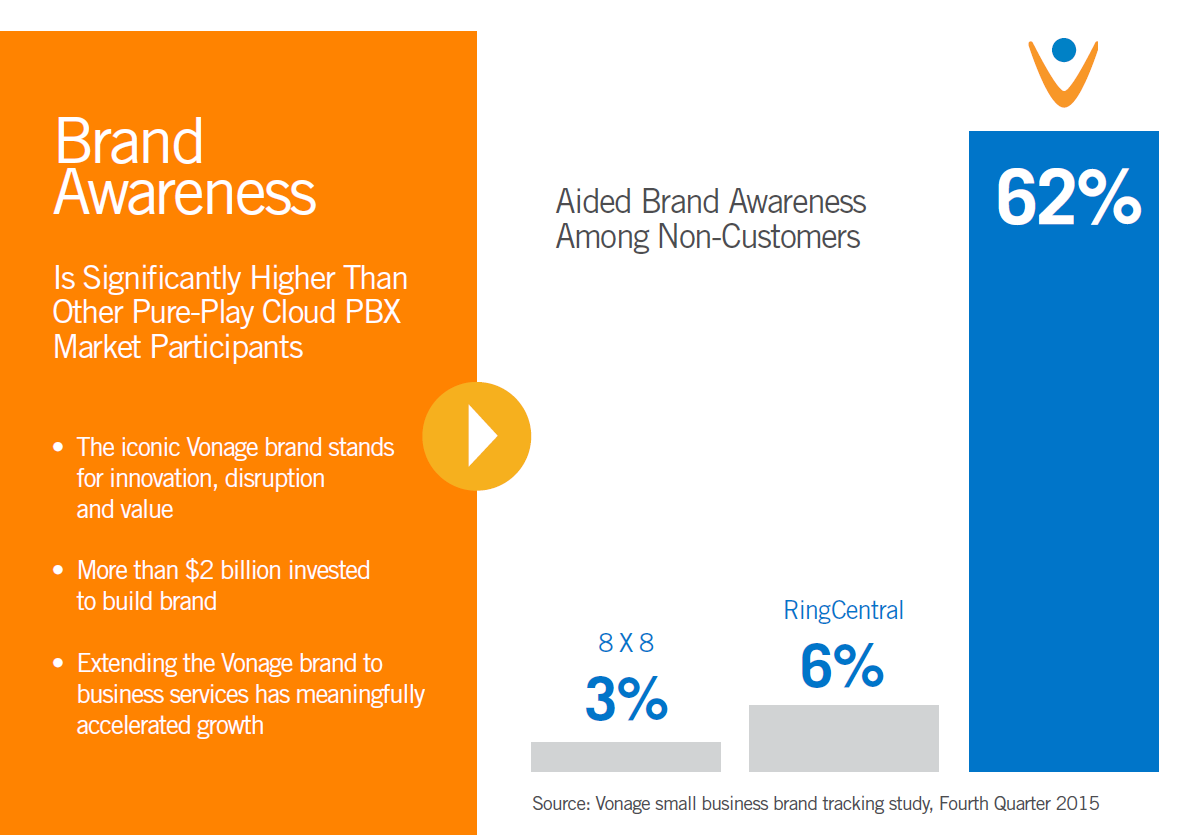 That valuation does miss one key thing here: management. I think management here is fantastic and has created a strategic platform that can deliver a lot of shareholder value for a long period of time by continuing to do bolt an acquisitions (management has been very clear at recent conferences that they see a lot of opportunity for acquisitions and consolidation in 2017) and using the platform they've created to take market share (from the combo of UCaaS / CPaaS sales force) and potentially expand into adjacent markets. I base that thought on several things:
Other odds and ends
Risks