Note: I first posted this idea on Sumzero last night / this morning; you can find it in pdf form there as well.
On May 29, 2014, Annie’s reported their FY14 earnings had missed estimates and guided to a Q1 loss. Three days later, the company couldn’t file their 10-K., and two days after that, their auditor (PWC) resigned. Shares were hammered in response, falling from ~$35 before the announcement to ~$28 on June 6th. It was a fantastic buying opportunity for investors: Annie’s hired KPMG as their new accountant a month later, got their filing done, and was sold to General Mills for $46/share just three months later.
Annie’s 14d-9 (found here) lists several companies as peers (see page 26), including Hain Celestial (HAIN). Almost three years later, Hain has been unable to file financials for going on 6 months now. While Hain’s accounting issues are likely worse than Annie’s, we believe the end result is likely to be the same: HAIN will get acquired for a nice premium by a big CPG company, and investors who take advantage of today’s distressed prices will benefit.
Make no mistake: HAIN’s accounting issues are worse than Annie’s, and there are plenty of indications that HAIN’s issues are real and serious. The red flags here are numerous: HAIN is a roll up with low insider ownership, excessive use of non-GAAP addbacks in their earnings (see page 8), serious accounting issues, and a tendency to trumpet any piece of good news, no matter how minor, while burying negative news in “Friday night dumps”. The company’s two senior most finance execs (their CFO and CAO) resigned right before the recent accounting issues popped up, and the company hasn’t filed or even provided any type of financials in almost a year at this point. Plus, when they do file financials, their core business will almost certainly be weak: trends had significantly softened in the quarters leading up to the accounting issues, and key customers like Whole Foods have reported soft sales which almost certainly impact HAIN.
Despite all those red flags (or perhaps because of all of those red flags), we think HAIN represents an asymmetric long opportunity at today’s prices. Hain would be an attractive acquisition target for a variety of acquirers, and with peer transaction happening in the high teen / low 20s EBITDA multiple range, HAIN would offer significant upside in such a scenario.
I’ll start with an overview. HAIN is a consumer packaged goods company focused on “better-for-you” products that lead to “A Healthier Way of Life” (think organic and natural products). The company has an array of brands you’ve probably heard of or used, including Terra Chips, Sensible Portions, JASON Natural Products (skin and hair care), and Celestial Seasonings (tea).
Hain was founded in 1993 by Irwin Simon, who is still the CEO / Chairman. HAIN has been your typical roll up since founding: they’ve acquired a bunch of different brands (55+ acquisitions since founding) and grown them all by increasing distribution / scale, mainly by utilizing their relationship as one of Whole Foods’ largest suppliers plus (from 2000 to 2005) their “global strategic alliance” with Heinz.
Hain started showing weakness as early as 2015, when increasing competition from both larger players and private labels like Whole Food’s 365 brands started to effect growth. The big problems, however, started last August, when HAIN needed to cancel their earnings release to look into the revenue recognition related to concessions given to distributors as well as look into their internal controls; in connection with that delay, they also announced they wouldn’t be hitting their full year guidance. Since then, the company has put out shockingly little information. They’ve gotten a few bank waivers for their credit facilities, and they announced their independent audit committee review found no intentional wrongdoings, but the company has been relatively radio silent on the process until last Friday afternoon (Feb. 10), when they filed this NT 10-Q after market close that announced an ongoing SEC investigation into the accounting issues as well as expanding their review from just distributor concessions to “perform an analysis of previously-issued financial information in order to identify and assess any potential errors.” HAIN’s share price has been decimated by the lingering issues, as it’s dropped by ~37% in a rather strong bull market. 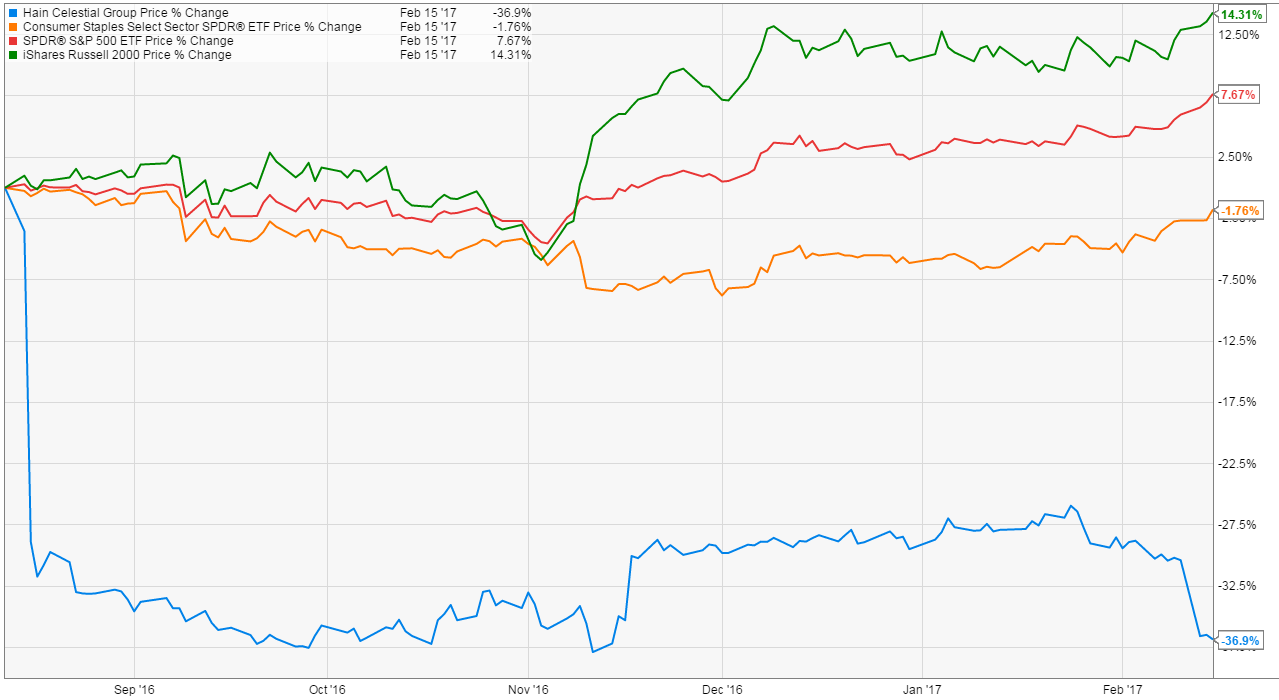 We think the share decline is overblown and has baked in a close to worst case scenario, and shares should recover rapidly once the uncertainty caused by the lingering accounting issues is removed. HAIN has real brands that would be highly valuable to a strategic acquirer or a private equity player, and we think HAIN would be an immediate acquisition target as soon as the accounting issues clear up. If they continue to linger, HAIN would make for an attractive activist target that could step in and immediately force a sale.
Let’s start with the obvious: how do we get comfortable with the accounting issues? We’ve gotten there in a couple of different ways; obviously, none are perfect, but the combination of them gives us comfort that we are well paid for the risk that something more nefarious is going on.

The combo of those five factors suggests to me that the really negative scenarios are most likely off the table. If that’s right and the accounting issues are concerning but not life altering (say, revenue recognition for distribution contracts plus maybe some accounts receivable issues), then HAIN’s upside could be substantial.
The last financials we have for HAIN is as of 3/31/16. Things have almost certainly changed since then (they provided guidance which they then backed off in delaying their earnings), but it’s the best starting point we have for valuation. LTM sales at 3/31/16 were ~$2.9B, with LTM Adj. EBITDA of $395m. At today’s share price of ~$35, the company’s EV is ~$4.4B, so they’re trading for <12x LTM EBITDA. That would be at the low end of multiples for all CPG companies, and particularly on the low end for a smaller natural / organic company given the wave of consolidation the space is seeing. In the wake of Annie’s acquisition, we’ve seen big food acquire other natural / organic plays like Boulder Brands and WhiteWave at nice premiums. Big food believes these are attractive acquisition targets as they can help accelerate growth as well as deliver large cost synergies while Big Food takes advantage of rock bottom interest rates to fund the acquisition.
WhiteWave is probably Hain’s best peer, and its acquisition is instructive for what a big food player would see in acquiring Hain. WhiteWave is in the process of being acquired by Danone for ~23.4x LTM EBITDA / ~21x 2016E EBITDA. Danone made clear the acquisition was about improving their growth outlook, but they also saw significant synergies in the deal. Danone’s synergy forecast called for synergies at 8% of 2015 sales levels (and 80% of WWAV’s standalone EBIT!); the synergies were ~75% cost related and 25% revenue / growth synergies. Despite the high multiple and high level of squishier / more difficult to achieve sales synergies, Danone investors loved the move and sent the stock up ~3% on the deal. 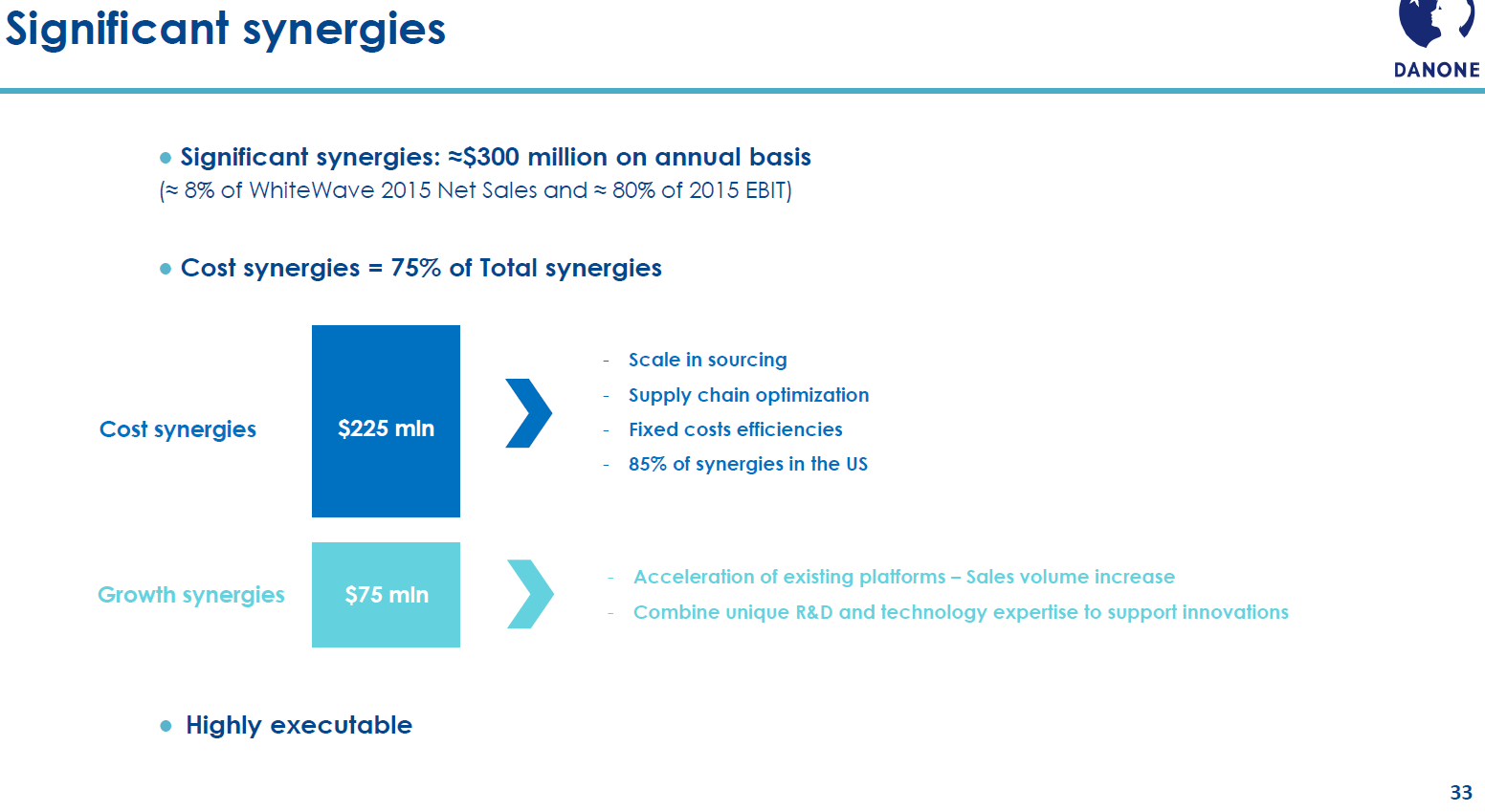 It’s reasonable to think that an acquirer could realize an even higher level of synergies from an acquisition of Hain. At under 25%, HAIN’s gross margins are far below most CPG peers; Annie’s, for example, was in the high 30s, and WhiteWave is in the mid-30s. While Hain’s GMs probably belong a little below peers due to some business model differences (including ownership of the lower margin Pure Protein segment), the gross margin gap is much too high and would represent a pretty natural synergy for a skilled big food acquirer. HAIN has admitted that their supply chain is “the summation of all the acquisitions” they’ve done and “not what you would draw on a blank sheet of paper”, and rationalizing it would go a long way to closing that gross margin gap. Add closing the gross margin gap to some SG&A cuts (Hain runs relatively lean, but there would be some SG&A cuts from duplicative overhead, IT, etc.) and even some potential revenue synergies (similar to what Danone forecasted for WhiteWave), and an acquirer could pay a pretty large premium from today’s share price and still realize a ton of accretion. If you assume an acquirer would target 8% of sales as synergy (in line with WWAV / Danone’s forecast), then today’s share price represents ~7.1x EV / post-synergy EBITDA multiple. I don’t think 10x EV / post synergies multiple is crazy by any means given most potential acquirers are trading in the low to mid double digit EBITDA multiple range; a 10x multiple would imply a share price of ~$53; interestingly, that’s right where HAIN was trading at in the days leading up to the original accounting announcement as investors saw WWAV’s and figured it was increasingly likely HAIN would be bought out.
Would management sell the company? It’s always tough to say with founder-led companies. I think Irwin (the CEO / founder) has done a fantastic job anticipating trends and acquiring companies, and I’ve generally found that founders who are adept at buying companies are also adept at selling their companies at big premiums when the timing is right and strategics are desperate. However, I’m not sure how much longer the ball will be in his court. Shareholders are going to be frustrated with the continued accounting issues, and an activist would likely be well received here as Hain is an attractive strategic target in a consolidating industry. With low insider ownership, an increasingly frustrated shareholder base (even before the accounting issues popped up, the majority of shareholders voted against their exec comp package), and limited corporate defenses against an activist (no controlling shareholder, Delaware incorporated, non-staggered board, no poison pill currently in effect, and several other activist shareholder friendly provisions), the company screams for some form of activism if the  board doesn’t do something soon. Carl Icahn has been in the stock before and held several board seats (he sold his stake in 2013), so he could look to get reengaged, but several other activists could get involved (Corvex has held a position in Hain before, though they didn’t on their most recent 13-F. SpringOwl’s most recent 13-F shows a small stake. Gamco owns just under 1%).
So how are things likely to play out from here? Their current bank waiver expires on Feb. 27th, so I’d expect we get some form of update from the company in the next week or so. Given the NT 10-Q was just filed with no real news given, I would guess that HAIN is probably going to need another bank waiver. It’s possible the banks demand onerous terms and this idea looks foolish quickly, but I would guess the waiver should be a non-event, though we might get some more information on the issues, a business update, etc. then. After we get the waiver, I would expect another two to three months until the company can file their financials, at which point I think the company is immediately put in play by a variety of strategics. In the meantime, I would not be surprised to see an activist having taken advantage of the recent sell off and elevated trading volume to have acquired a large enough position to file a 13-D and start making noise about getting more information on the business from management.
Other odds and ends