Layne's Heavy sale a catalyst for a blog post $LAYN

I’ve had the below write up on Layne Christensen (LAYN; disclosure: long a bit) ready and waiting to post for a few weeks now. I was going to wait to post it closer to Q4 earnings, but last night the company announced the sale of their heavy civil business for ~$10.1m, and I figured it was better to post the write up now before it become too stale and I needed to completely re-write it to update it. I think the heavy civil sale does a lot to justify both sides of the thesis.  At yesterday’s close price of ~$9.85 (I don’t know where the stock will open today), LAYN was probably trading below their SOTP, but the fact they just sold a division for $10m that their investor deck was pitching as worth $15-29m supports the fact that their preferred SOTP math is quite questionable (as discussed below).
Perhaps the most interesting part of the sale that it seems part of it will be paid w/ LAYN’s own stock (~$3-4m of stock; though it seems like buyers have option to pay with stock and are not required). That might sound small, but at yesterday’s closing price it’s around 1.5% of their shares outstanding. If you really think the SOTP of LAYN is 2-3x higher than today’s prices, retiring that many shares is pretty value accretive to what remains outstanding.
Anyway, the (now slightly stale) write up is below.
Layne Christensen (LAYN; disclosure: long a bit) is an interesting sum of the parts (SOTP) story. They first popped up on my radar when I saw the slide below. 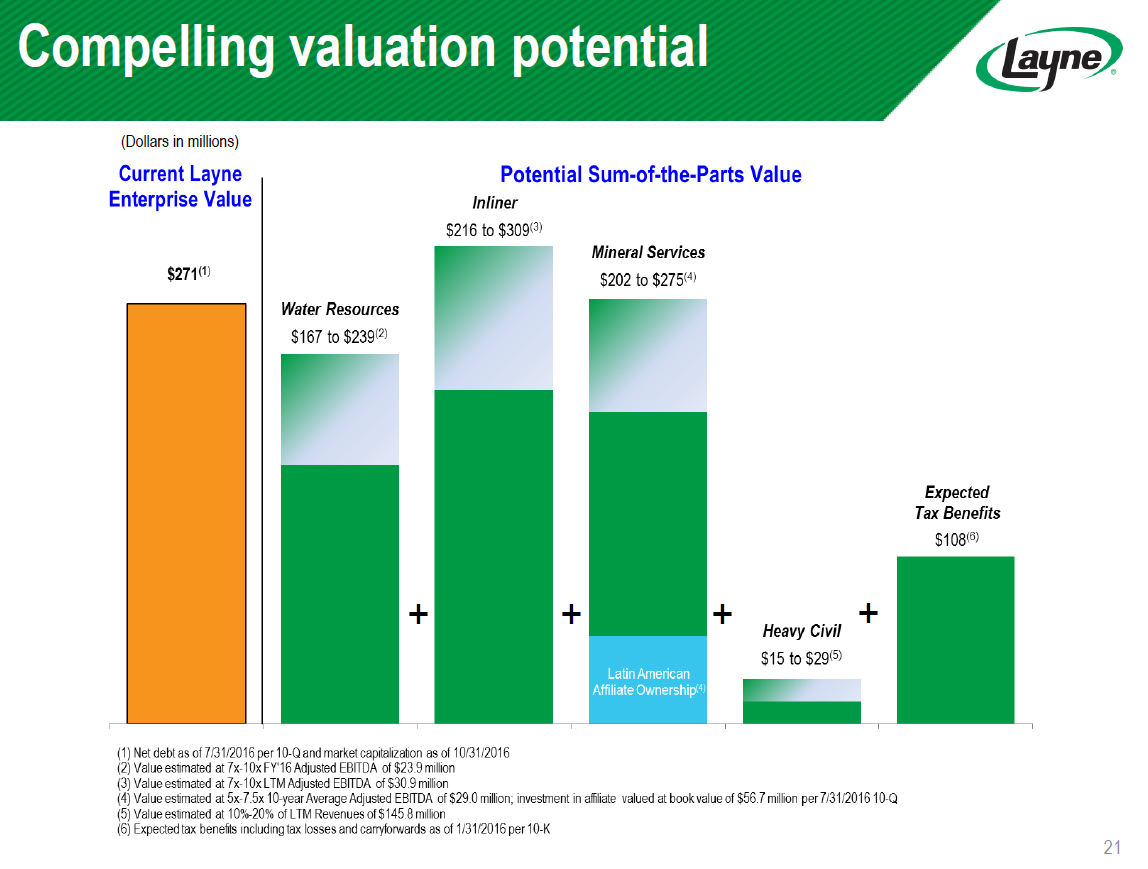 LAYN has a decent bit of debt on their balance sheet, so if you believed in the numbers above you could be talking massive upside to the stock. The chart below takes the midpoint of those numbers and spits out the equity value- with the stock at ~$9.85 today, you’re obviously talking about pretty extreme upside. 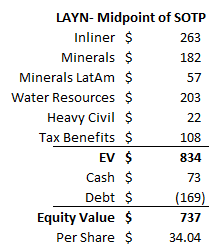 So the question I’ve been asking myself is if there really is a SOTP story here, or if LAYN played a bunch of creative games with their multiples (notice LAYN’s SOTP chart includes revenue valuations, book value multiples, LTM EBITDA multiples, and 10 year average EBITDA multiples) to make themselves look way more interesting than they really are. My conclusion, after digging around a bit into it, is….. maybe?
Sorry for the inconclusive answer, but it’s a difficult story in a difficult industry, so let’s dive in and try to make heads or tails of this thing.
LAYN has four segments (water resources, inliner, heavy civil, and mineral services), but they all have an overarching theme of touching water supply / management in some form. The four segments are: 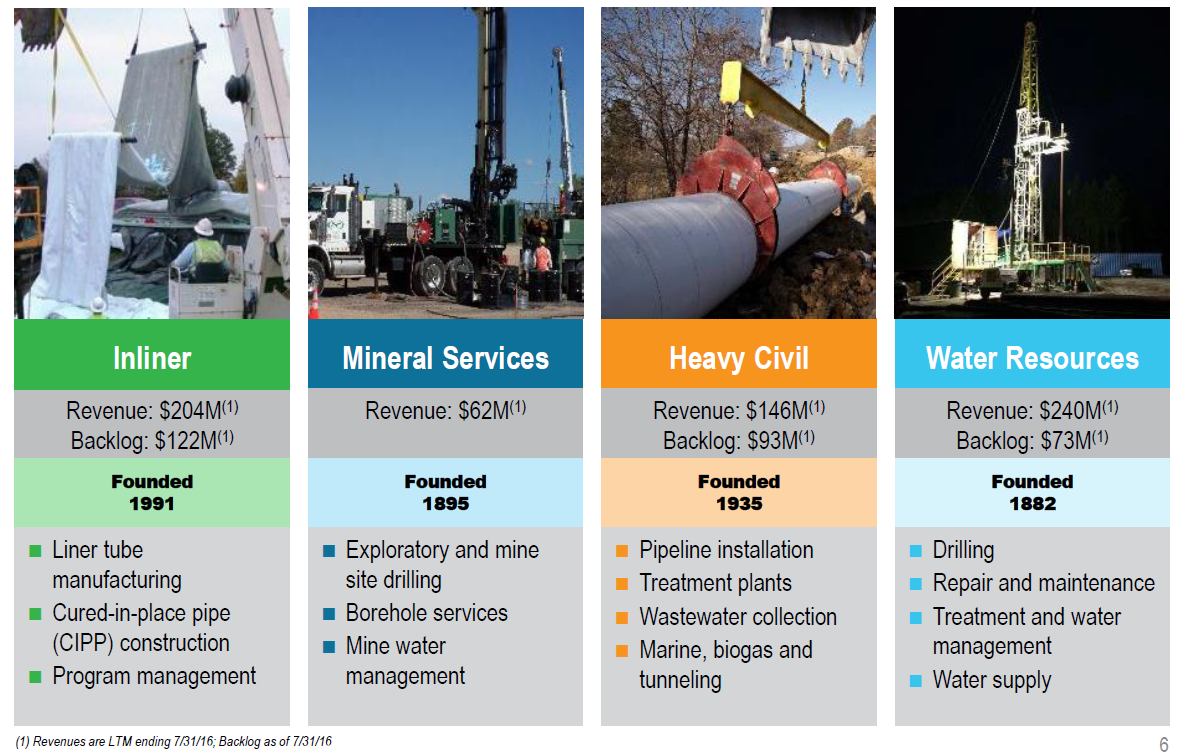 The company is pretty open that their future is in the inliner and water resources divisions, while mineral and heavy civil will likely be divested at some point. Inliner and water are probably ok business given their long history and size / market share, but the bottom line with LAYN is that I don’t think any of their businesses are really great. They’re competitive, capital intensive, and cyclical. However, just because the business isn’t Coke in the 80s doesn’t mean they’re worthless.
LAYN’s performance over the past few years has been just awful. Some of that has been driven by commodity cycles going against them, while some of it has been driven by self-inflicted wounds. Today, LAYN’s cost structure is much lower. If they can stop shooting themselves in the foot and get any luck from a mild rebound in the cycles, then LAYN could be massively undervalued at today’s prices.
Some background is important to understand the reasons why the opportunity might exist. For the most part in all of their segments, LAYN gains work by going through a competitive bid process. In general, a competitive bid process puts out a piece of work (i.e. lay this pipe here) and a bunch of (hopefully) qualified companies provide a price that they are willing to do that work at (a “fixed-price” contract). Whoever bids the lowest price (i.e. offers to fulfill the contract at the lowest price) wins. The winning company is then responsible for holding costs as low as possible in order to make a profit. So, in our pipe laying example, a company might bid $1m. If they win the contract and it only costs them $700k to lay the pipe, they’ll make a $300k profit. If it costs them $1.5m, they’re responsible for that $500k in extra cost and they’ll lose $500k.
As you might imagine, fixed price contracts are not exactly an investor’s dream. The incentives to win work can cause companies to underestimate costs and bid on contracts at levels too low to cover their costs. LAYN’s Heavy Civil division had exactly this problem- starting in fiscal 2012, the company experienced big cost overruns and project delays on some projects, and the division lost tens of millions of dollars over the past few years. In effect, losses at the Heavy Civil division and high corporate overhead expenses wiped out earnings through the rest of the company.

Note- these are pulled straight from the 10-ks; I’ve listed which 10-K for reference. There has been some divisional realignment / discontinued ops which makes numbers not perfectly comparable, and some of these include goodwill write offs, but they paint the right general picture. Numbers don’t sum to total because I didn’t add in the income taxes, other expenses, etc.
Just as the company started to stabilize the Heavy Civil division in FY14, the company’s mineral services division was whacked by the drop in commodity prices. The division flipped from making ~$72m in FY12 to losing tens of millions the past few years as commodity prices cracked and business fell off a cliff.
So, heading into FY17, it seemed like the company was set up nicely. Heavy Civil and Mineral, while certainly not firing on all cylinders, were stabilized and set to break even as they had cut tons of cost and were finishing the jobs that had massive cost overages that had resulted in such big losses. The company was projecting strong growth from their core Water Resources and Inliner Divisions, and they planned on riding growth in Water and Inliner to a strong FY17 that would set them up for hitting profitability in FY18.
Of course, LAYN is cursed, so things haven’t worked out that way. While Inliner has performed well, Water Resources has seen EBITDA fall off a cliff, driven by cost overruns on a few projects (similar to heavy a few years back) and a falloff in demand from energy (water resources provides water services to fracking companies, which have been hit by the big decline in oil prices), and weakness in California (an unusually wet year for California has led to lower than expected demand).

In order to survive all of the operational issues above, Layne brought in a new CEO and sold off their GeoConstruction business. They’ve also massively cut costs, bringing unallocated overhead from almost $50m in 2015 to ~$30m this year and targeting $25m next year.

So hopefully the (admittedly simplified) overview above gives you an overview of why the discounted SOTP story makes sense. 3 of LAYN’s 4 divisions are currently at bottom of the cycle like earnings due to a combination of mismanagement or an awful cycle, and if the new management team can get the operational missteps under control, the cost cutting plus a slight turn in the cycle in a few of their divisions could result in pretty massive leverage to the upside.
And there’s reason to believe that several of their divisions are bottoming. Remember, America is great again. Part of being great again involves massive investments in infrastructure, and (as LAYN likes to point out) a lot of our water infrastructure is ancient. LAYN is the largest player in a bunch of different water segments, so a boom in water infrastructure spend would directly benefit them. Combine an increase in water infrastructure spend with commodity prices that seem to have bottomed out / a return to inflation, and you have the makings of a massive upcycle for LAYN. 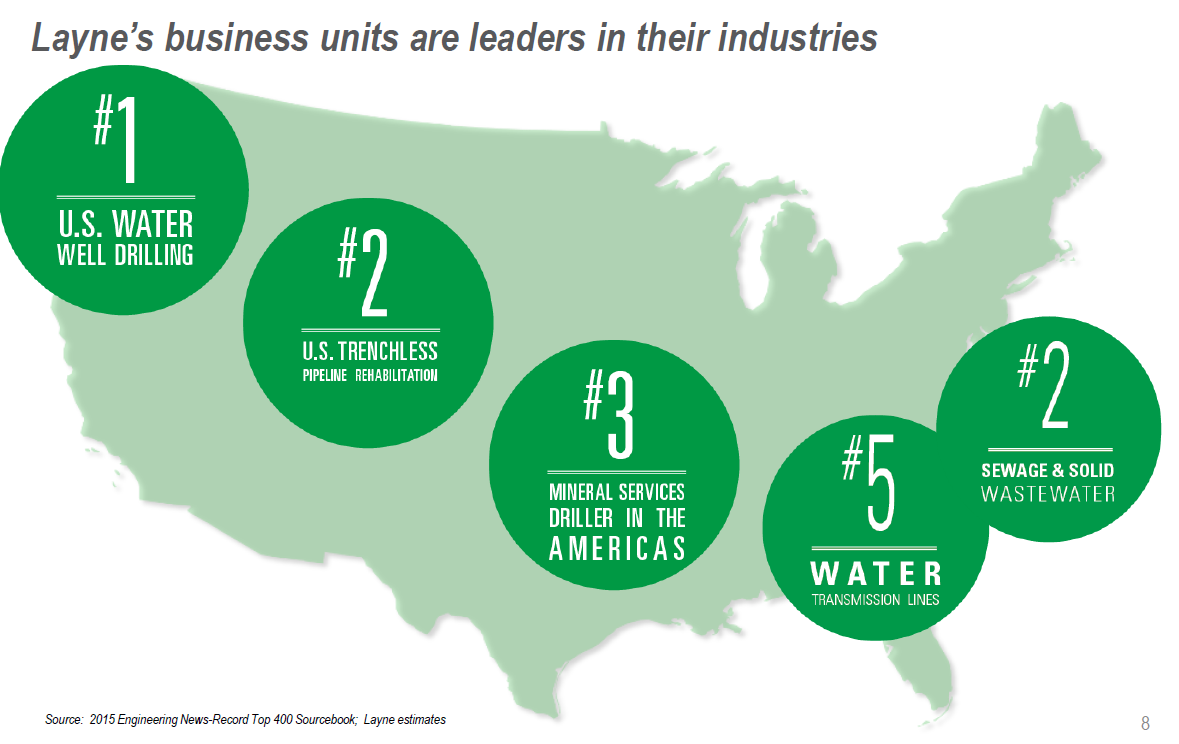 Putting it all together, the bull case here sees LAYN trading at a wide discount to the sum of their parts due to trough earnings in a bunch of their divisions. A combination of old, unprofitable business running off, cost cutting, and improved infrastructure spending will drive operational leverage for a bunch of these segments, and that operational leverage plus a decent bit of financial leverage leads to massive upside from today’s stock price.
It all sounds fantastic. But I certainly have some questions
I mentioned at the start of the article that I wondered if LAYN wasn’t playing “fun with multiples” games for their SOTP chart. And, after diving into it a little further… I feel like they are playing games with their multiples. Below are a few of my key issues
So let’s recast those SOTP numbers a bit and see what a more reasonable valuation looks like. Below is my “quick stab” at valuing each of the parts; I felt like it was a bit of fun with numbers as I was doing it but I wanted to try to think about a valuation for everything.
I’ve put the whole comparison below. LAYN’s suggested values are on the left; my values are on the right. 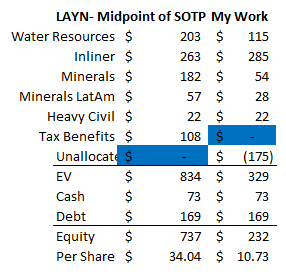 So putting it altogether suggests a market price a bit above today’s price.
But honestly, I just keep looking at those numbers and feeling like the valuation is much too conservative. The great thing about an equity investment is you get all of the upside potential while your downside is limited to what you put into it (unless you invest with Breitburn). In LAYN, you’re investing in three different segments that are probably at or close to cyclical bottoms for one reason or another. I kept writing in my valuations things like “I can’t see anyone paying that multiple given where we are in the cycle.” But cycles turn unpredictably and often much more quickly than anyone expects. What if water resources future is as bright as management thinks and they get through these cost overruns quickly (they mentioned they hired the team that helped them stabilize heavy civil, and given heavy civil was in much worse shape than water perhaps upside can be found much faster)? What if we get rampant inflation and commodity prices skyrocket; could mining be doing $30m in EBIT two years from now in that scenario?
All in, it just feels like LAYN is a mispriced option at today’s prices. If things break correctly, shares could easily be a double or more. As long as Inliner keeps performing well and none of their other divisions take a further “turn for the worse”, there’s probably not too much downside from today’s prices. For me, it just feels like a very interesting bet at today’s prices, which is why I have a small position. If I got comfortable that water could be turned quickly, I could justify taking a much larger position.
Odds and ends