Novelion might not be an orphan for much longer $NVLN

Novelion (NVLN; disclosure: long) is not for the faint of heart. In addition to a history of FDA fines for “fast-and-loose” interviews and a still pending DoJ investigation, the company has a massive debt load (face value of debt = ~1.5x market cap; debt trades in the 80s) and a rather “storied” history that includes banker pitches that doubled as coke fueled wife swaps.
Despite all the noise, I think Novelion represents a fantastic risk/reward at today’s prices of ~$10.50/share. Significant insider buying late last year confirms the potential for the company, and conservative assumptions value shares at more than double today’s prices. In an upside scenario, it would not surprise me to see the stock acquired for 3-4x today’s share price in the next year.
Novelion was formed from the merger of QLT and Aegerion late last year. Going into some background on each of the companies is critical to understand why I’m so bullish on the potential here.
Let’s start with QLT, as it’s the simpler story. In late 2012, QLT had a new board take over; they were led by Jason Aryeh, who is now Chairman of Novelion. They sold QLT’s key products to Valeant and Mati for a nice prices and used the cash to pay out a big special dividend ($200m) and buy back a significant amount of shares (~10% of the company). After those moves, QLT had three assets: a significant cash balance ($100m+), an orphan drug (now called Zuretinol, discussed later), and a Canadian tax domicile with a ton of Canadian NOLs.
QLT understood that a small company with no revenue didn’t have the infrastructure to support running an orphan drug through Phase III trials, so QLT’s team went looking for a merger. And while the team was fantastically successful at finding merger candidates, that weren’t so successful at closing those mergers. First, in mid-2014, QLT struck a deal to merge with Auxilium that valued Auxilium for ~$21/share. The merger broke when Endo Pharma came over the top and bought Auxilium for $33.25/share. Then, in mid-2015, QLT announced a deal to merge with InSite Vision in a deal that valued InSite at ~$0.178/share. The merger broke when Sun Pharma bought InSite for $0.35/share.
So merging w/ Aegerion to form Novelion was actually QLT’s third shot at merging. Obviously, I like the fact that QLT’s first two mergers broke because someone paid a massive premium for the other side of the deal, as it seems to indicate QLT had an eye for spotting undervalued pharma companies. So what exactly were they seeing in Aegerion?
Aegerion has two drugs: Juxtapid (Jux) and Myalept (Mya). Both are orphan drugs (similar to QLT’s phase III Zuretinol), which means they are approved for a small patient population and enjoy extra regulatory / patent protection. Jux is used for patients w/ homozygous familial hypercholesterolemia (HoFH), a rare disease (effects one person in every 160k-1m people) that impairs the body’s ability to remove LDL-C (bad cholesterol) from the blood. Mya is used for Generalized Lipdystrophy (GL), a group of rare symptoms (affects ~ one in a million people) characterized by a lack of adipose tissue. The lack of adipose tissue causes a leptin deficiency, which makes patients experience significant fatigue, unregulated appetite, and leads to enormous issues.
Both Mya and Jux are very serious drugs. They come with boxed warnings discussing their side effects and they’re only available through a Risk Evaluation and Mitigation Strategy (REMS) program, not at a standard pharmacy. REMS program are designed to educate doctors about the risk of dangerous drugs, monitor patients during treatment, and restrict access to patients who truly need the drug.
Because of their small patient populations and strong patent protection, orphan drugs are often sold at huge costs ($300k-500k/year is typical). The high price point creates an incentive for pharma companies to expand drugs labels or even encourage doctors to prescribe it off label.
This is where Aegerion ultimately got in trouble. Their CEO went on TV and made off-label claims for Jux that got them in trouble with the FDA. The trouble ultimately ran deeper than just the CEO, as it turned out their sales force had been pushing the drug aggressively and their REMs program wasn’t up to speed. Ultimately, all of these issues got their CEO fired (and obviously the coke fueled wife swap rumors didn’t help); however, the damage had already been done as the share price had collapsed and the DOJ was demanding penalties. These issues, plus the release of a competitive drug class (PCSK9s) for Jux, destroyed Aegerion’s stock price, revenues, and cash flows.

The question is simply what the odds of success / approval are. The success rate of drugs going into phase 3 trials is ~50%. Given the orphan nature prior Zuretinol trials (less patients and more limited data), I think this might be a more difficult approval so I’ll assume 25% chance of success. If I say the drug would be worth $400m on approval and has a 25% chance of success, it’s worth $100m.
Just to confirm I’m thinking about the upside correctly I’ll note Allergan acquired a drug in the same retinoid area for $60m plus milestones in September. That drug is only phase 1 and frankly I think its technology isn’t as strong as QLT’s program, so a $60m payment for that drug confirms that QLT’s program would have mammoth upside if approved (and also suggests valuing it at $100m when it’s about to enter phase 3 is probably way too conservative).
It’s also worth noting that Novelion believes Zuretinol could get a pediatric priority review voucher. These can be pretty valuable- Sarepta just sold one for $125m, though that price is down quite a good bit from what they were fetching a few years ago. Valuing Zuretinol at $100m is basically saying it’s worth less than the potential priority review voucher and the drug itself has no value; I feel that’s way too conservative but the math gets crazy so quickly at bigger levels I don’t think we need to be more aggressive.
Again, this is a pretty binary outcome (it’s either a rejected and a zero or approved and worth hundreds of millions of dollar, though they could capture some value by selling the priority review even without approval), but given I think we’re buying the company for less than the value of Mya and Jux at today’s prices, having an option worth potentially hundreds of millions thrown in for free works for me.
Valuation
Putting it all together, I think there are three key sources of value for Aegerion
Putting the three together, Novelion would be worth ~$650m, which would value the equity at over $22/share. 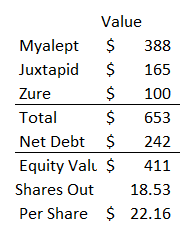 What gives me confidence that I’m right?
Two things give me confidence that the value of the combined companies is way higher than today’s price.
First, as I mentioned above, I think the former QLT’s management is sharp. They bid for two companies in the past two years and were beat out by massive topping bids. They clearly see the value in Aegerion, and a key piece of my confidence comes from the fact that as part of the merger they and some other sophisticated healthcare investors bought a ton of QLT shares (~13% of the combined company’s shares outstanding) at $8.80/share (adjusted for a five for one reverse split) to give the company a good cash base to work from. Yes, that’s a discount to today’s share price, but the price was actually a premium to QLT / Aegerion’s share price when the deal was announced.
Second, the background section of Aegerion’s merger documents reveals that several parties were interested in bidding on Aegerion. In particular, the Myalept asset seemed to be in demand. For example, company B offered to acquire Aegerion for at least $2.55/share ($12.75/share adjusted for the split) on May 24, 2016, but Aegerion turned them down because they didn’t like the all stock nature of company B’s bid and thought the offer undervalued Aegerion’s assets. Company C offered to work with Aegerion to license Mya in Europe but dropped off when Aegerion made clear that they could develop Mya themselves. Company D also got involved and wanted to acquire either all of Aegerion or Myalept, but eventually backed out after the DOJ investigation heated up. These were mainly inbound indications of interest for Aegerion, which makes me think that once the DoJ investigation and everything is in the past, a bidding war for Aegerion could really play out if they were put on the block.
Why does this opportunity exist?
With every investment, I try to think of a reason why I might have an edge. I think a variety of factors have presented the opportunity for Novelion.
First, there’s still plenty of hair on the company. The combined company hasn’t even filed their first financial report together, so any valuation has to be pieced together from estimating a PF balance sheet. And not only do you not have a working combined balance sheet yet, but the separate companies’ financials looked absolutely horrific on their own. Aegerion, on its own, looked like it was about to go bankrupt. Their YTD net income for 2016 (through September) showed a loss of $138m and they were massively levered (QLT had a net cash balance; all the debt for the combined company comes from Aegerion. Given the new company is still probably too heavily levered, having Aegerion support all the leverage without QLT’s cash was completely unsustainable). They’re under DoJ investigation. Their biggest product for 2016 (Jux) is facing investigations and mammoth competition that resulted in YoY sales being more than cut in half, and people are worried that it will go to zero. And QLT doesn’t look much better- it has no revenue and has lost $33m through the first 9 months FY16. It’s easy to look at these companies merging and think it’s just two desperate companies merging to stave off bankruptcy for another month or two. But I think that’s too simple.
The losses for both companies have been driven by one-time items like Aegerion’s $40m settlement w/ the DoJ and QLT’s failed mergers and write off of an investment. Heading into 2017, expenses should normalize, and if they do, Aegerion’s underlying cash flow generating powers should flow through. In fact, Aegerion has done a great job cutting a ton of costs to the point where they likely would have been cash flow positive on their own in 2017. Showing positive cash flow while investing in QLT’s retinoid program and with Myalept growing rapidly would let the market see the underlying strength of Aegerion’s core products.
How could I be wrong?
If I’m wrong, where’s it likely to be?
Catalysts
Other Odds and Ends

If you have a chance give your updated view on NVLN, I would be both grateful and interested. Cheers.

Thank you for your quick reply, Andrew.

no changes to my thinking so far

Thank you for sharing this , Andrew. I would be grateful to hear your current thoughts on recent developments including the price action, the Canadian delisting, etc. either here or on StW.

can you comment on the warrants we got? are they currently worthless?

Thanks for the update Andrew. Any reason you don´t post this on Seeking Alpha. I´m sure it would be get more eyes on this little know equity.

Thanks for the update Andrew. Any reason you don´t post this on Seeking Alpha. I´m sure it would be get more eyes on this little know equity.