This time could be different for SWK Holdings $SWKH

SWK Holdings (SWKH; disclosure: long) has floated around the “deep value / NOL” investing community for years. The stock has been written up 4 times on VIC, and if you look deep enough on the internet you can find plenty of other small value investors and bloggers who have looked at it. To date, the stock has been a relative disaster, but it’s possible the company is about to turn a corner.

SWK is basically a giant net operating losses (NOL) shell that was taken over by Carlson Capital (owns ~70% of the company) starting in 2009. In 2012, they decided to focus on building out a specialty finance / asset management business focused on secured lending and royalty financing to healthcare companies looking to raise less than $50m, as they thought the small size made that space more inefficient. As a small investor who spends most of their time focused on smaller market cap companies, it’s certainly hard not to feel a bit for SWK and their strategy.
The business model is supposed to look something like this: take advantage of SWK’s network to loan money at attractive interest rates to interesting start up healthcare companies. Get warrants when you make the loans. A few of them will default, but one or two of them will be home runs and the warrants will be massively profitable. Use the NOLs to shield the massive capital gains those warrants generate. Profit. Their website has an old IR deck (from 2013) that goes into a bit more detail on why they think the market is attractive. 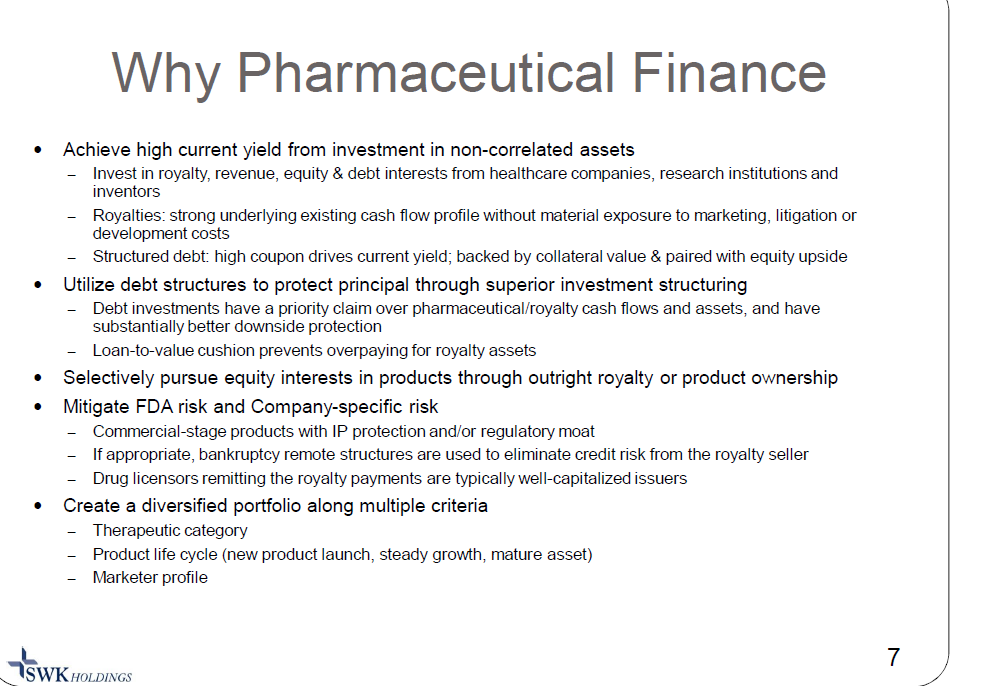 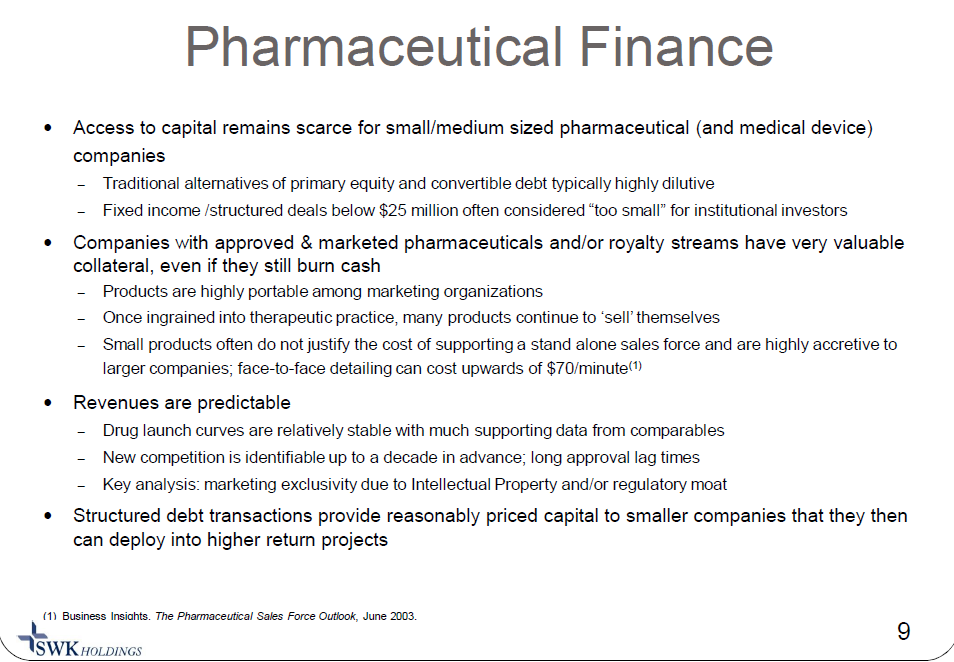 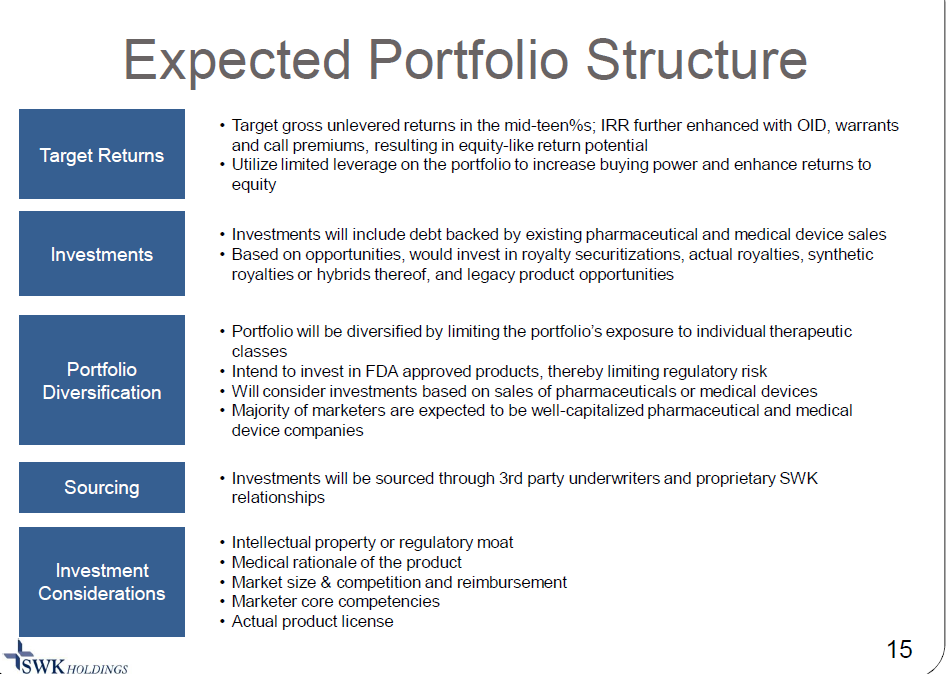 Unfortunately, SWK’s experience has been a bit messier than that simplified model, as they’ve had a few write up and haven’t really had any big winners to offset them. There are a variety of different ways to show what a disappointment SWK has been, but since they are a finance company and finance companies are generally judged on ROE, I think that may be the best way to look at them. If you take their total earnings before taxes since they made the switch to specialty finance (for FY12 through Q3’16) and take out the earnings for non-controlling interests, it comes out to ~$12m in total. Finance companies are generally judged on their ROE, and SWK has averaged ~$120m in shareholder equity over that time, so you’re talking about an ROE in the low single digits for that whole period. That’d be awful for a mortgage lender, and SWKH is much riskier than a mortgage lender.
What makes this return even worse is that SWK has been operating in a relative bull market for healthcare stocks. Below is the return for the biotech index and S&P 500 since SWK launched their specialty healthcare finance strategy; you would think such a tailwind should have provided SWKH with an above average chance of having some of their warrants pay off in a big way. If SWK hasn’t been able to produce anywhere near strong economic returns in a biotech bull market, what chance do they have in a somewhat less bullish market?

Also, there’s reason to question if you can even trust those earnings numbers. Most finance companies make a reserve for bad debt when they make loans; for example, if they make $1,000 worth of loans, they’ll assume they eventually need to write off ~$5 of those loans. Rather than expense those write offs as they pop up, which would make their earnings much lumpier, they make that reserve upfront and then charge any write-offs to that reserve while adjusting reserves up or down depending on how the loans are performing. SWK doesn’t have much in the way of reserves; they really don’t take credit losses until it’s painfully obvious a borrower isn’t going to be able to pay them back. The chart below, from p. 33 of their 2015 10-K, does a great job of illustrating this:

Look at the 2014 allowance for credit losses. $0!!!! The company was assuming that all of their loans to risky / startup healthcare companies would pay off at par (which proved spectacularly wrong)! You can see more evidence of a failure to account for potential issues in the current financials (for Q3’16); the company currently has a $7.9m loan to B&D Dental that has been on non-accrual since September 2015. It’s been a full year and B&D is still on non-accrual with no allowance for credit losses (i.e. the loan is held on SWKH’s books at par). Not only has SWKH not taken an allowance for a loss, in Q1’16 SWKH loaned B&D more money ($0.3m) to pay critical vendors. Generally, when you’re loaning a company money to pay critical vendors, it’s a sign that the company has some chance of default (generally a pretty good one), but SWKH is fine to loan more money to them while maintaining the loans on their books at par. SWKH has a history of this “hold everything at par until literally at the doors of bankruptcy / restructuring,” and it’s resulted in some pretty big, sudden losses in the past (check out their Q3’15 earnings).
Ok, so you’ve got a company that’s historically underperformed a raging bull market and a management team that may be trying to boost their (poor) reported results by pushing losses out as far as possible? How could the stock possibly be attractive?
The answer, of course, is price. At 9/30/16, SWKH had a book value of $13.74 versus today’s price of ~$10. Yes, you probably want to adjust that book value down a bit to account for the company having no real loss reserves for their loans (I’ll do it in a sec), but even if you take a pretty negative view on the potential credit losses you’re buying the company for a decent discount to book value. And there’s reason to think book value could be on the verge of inflecting upward this year.
SWK has been sitting on a really large cash balance for most of the last year (~$66.4m, or ~$5/share, at 9/30/16). That cash balance acts as a drag on earnings and is super inefficient for SWK, as the bulk of their NOLs expire in 2021 and they need to put money to work / generate earnings to use those NOLs up. However, since they filed their last 10-Q, SWK has filed three 8-Ks (one, two, and three). Each 8-k contains details of new lending activity for SWK or a previous investment getting realized. In total, SWKH put ~$38m (~$2.90/share) to work across four investments as well as selling Holmdel for $8m (~$0.60/share). Per p. 13 of SWK’s most recent 10-Q, Holmdel was on SWK’s books for $7.2m, so the sale will result in a small gain for SWK.
In total, SWK will have deployed roughly half of their cash balances across those transactions. The hope here is that these transactions are at really attractive marks, and if any of them pan out earnings for 2017 should look really nice. Obviously, that requires putting faith in the SWK team and historically that hasn’t panned out well, but there could be reason to think this time is different. As part of the big write off in Q3’15, SWK’s old CEO “resigned”. His replacement hadn’t really deployed much cash since taking over (cash balance had ballooned from ~$25m at Q3’15 to $66m at Q3’16 as the portfolio matured and not much was reinvested), so I’m somewhat hopeful that the patience to find deals means these new ones are really strong investments. Carlson Capital might be somewhat hopeful as well- back in August, they bought shares on the open market, and several Carlson employees serve on the SWK board and seem to always choose to receive shares of SWK instead of cash compensation. Yes, those are small purchases and decisions, but Carlson already owns ~70% of the company and the stock is super illiquid; I have to think the decision to buy even a little more or (for directors) continually increase their stake isn’t taken completely lightly.
So I think there are early signs of bullish activity here, and at today’s prices you’re paying for less than book value even if you substantially hair cut a lot of SWK’s balance sheet items. Below is a consolidated balance sheet for SWKH. 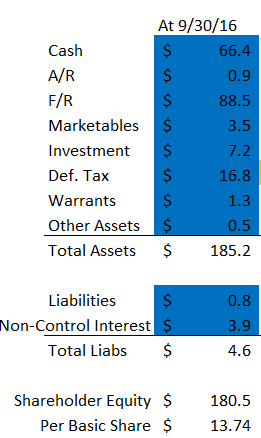 I use that as a starting point and make the following adjustments
Put it all together and you get the following PF balance sheet. 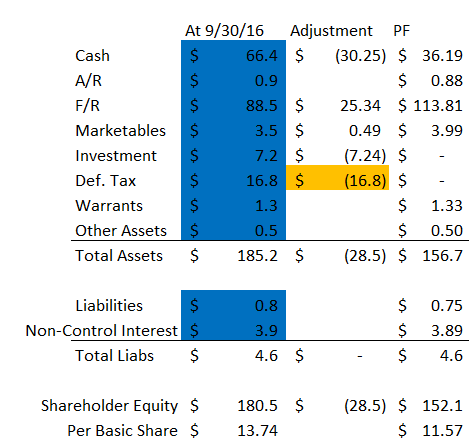 So, after all those adjustments, we get an adjusted book value of ~$11.50, ~15% higher than today’s share price, and that gives them no credit at all for their $405m in NOLs (>$30/share).
I like that valuation, and if I'm right that there are early bullish signs here, investors could realize a very solid return from here.