Will activism at YuMe lead to a Sizmek like premium? $YUME

YuMe (YUME; disclosure: long) is a fascinating situation. After being run as a piggy bank for management for years, activists took over late last year and have focused on significant cost cutting and repurchasing shares. The company is undergoing a strategic review and one of their major shareholders has already offered to buy the company for between $4.52-$5.22/share. At today’s price of ~$3.55, a successful sale anywhere near that price would result in a fantastic return.
On the surface, it sounds fantastic. And I like it enough to have a modest position here. But there are absolutely lingering risks that prevent YUME from being the “home run” that the first paragraph suggests it should be.
Let’s start with an overview. YuMe is a digital advertising company. Basically, they run an advertising marketplace; a digital property owner signs up with YuMe to get advertising on their content, and an advertiser can use YuMe’s marketplace to reach all of those sites that YuMe has plugged into. YuMe connects the advertiser / property owner and keeps a cut of the advertising payment. The big appeal of YuMe is that they are generally video focused, so they try to appeal to traditional TV advertisers with the pitch that they can reach TV-like audiences with better precision and more data on viewership (who’s watching, for how long, etc.).
It all sounds great, but the digital ad solution market is an extremely competitive one. YuMe IPO’d in late 2013, and even at the time of their IPO investors had questions about how competitive the space was shaping up to be. Investors would have been right to listen to those doubts. 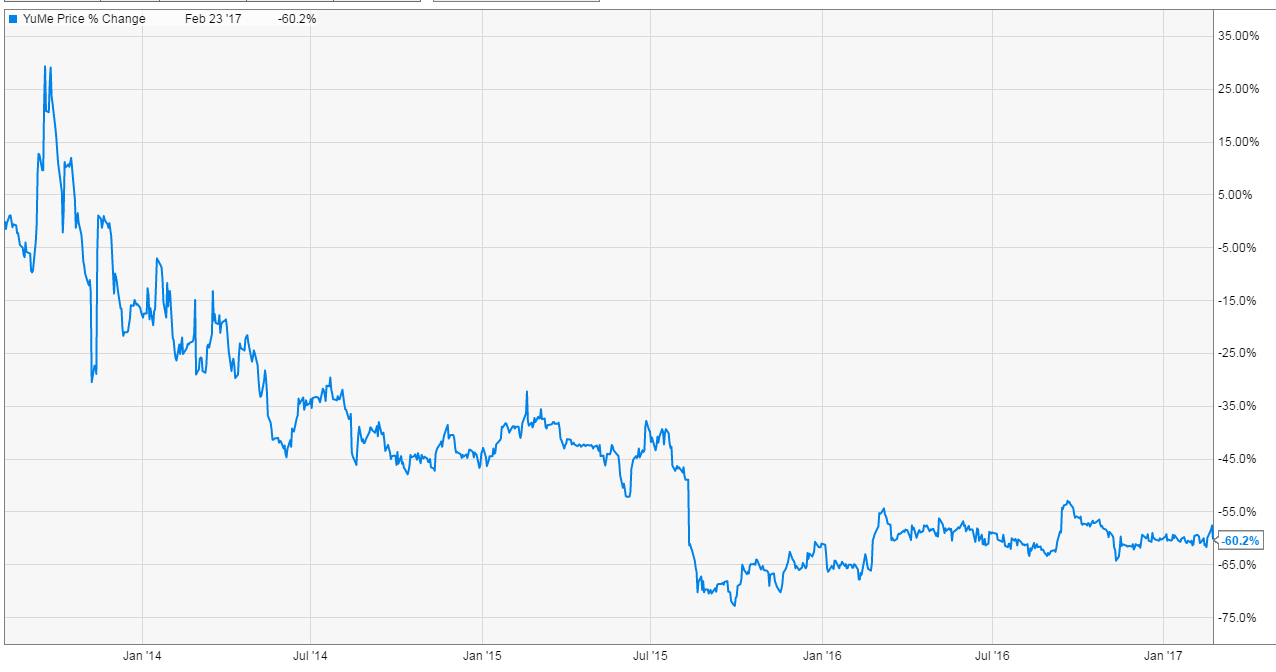 While shareholders have mainly suffered through out Yume’s existence, management was richly rewarded for running the business into the ground.  I’ve pulled the slide below from the VIEX activist presentation, which I’d strongly recommend flipping through. 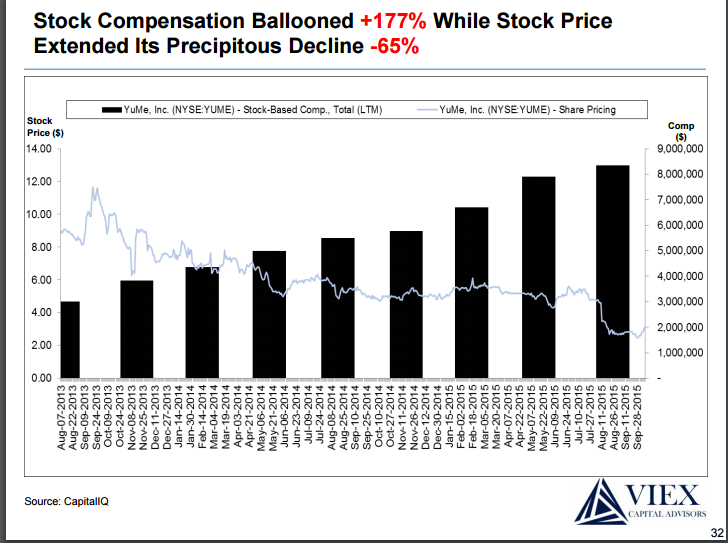 After years of underperformance, YuMe reported an absolutely disastrous Q2’15 in August 2015. The share price fell to levels approaching net cash, which caused activist investor VIEX Capital to begin building a 15%+ stake in the company. VIEX eventually ran a successful proxy contest against the management team, and in the wake of the proxy contest the CEO / Chairman eventually resigned, the company announced it was pursuing strategic alternatives, and the company finally got around to finding some cost cuts (cutting out $14m/year for 2017).
(PS- a random rant. The company spent $815k on their proxy contest. The activist’s board nominees won w/ ~22m votes each versus ~5m each for the incumbents / management. It was one of the most overwhelming votes against a management team I’ve ever seen. How can management spend ~$800k of money and lose that badly? Why can’t they just admit they’re getting wiped out and save the money? So frustrating to see the incentives of a management team playing with someone else’s money to save their job.)
The cost cuts and activism are having some effects. While revenue has continued to decline, profitability for Q4 was way up, and the company is guiding to continued profitability increase for FY17. In addition, the company is finally doing something about their big cash balance and has repurchased 2.2m shares, or ~6-7% of their shares, over the past year.
The combo of strategic alternatives plus massive cost cuts alone would make YuMe interesting. However, VIEX isn’t the only activist in YuMe, and the other activists here are where things start to really heat up. AVI Partners owns ~10% of YuMe, and in early September they offered to buy YuMe for $4.52-$5.22/share (subject to a few conditions). In response to that bid, another activist (Edenbrook, who owns just over 5%) filed a 13-D saying they thought the offer dramatically undervalued YuMe and that the company was worth at least $7.15/share in a deal.
So the combo of all of those things suggests there’s big upside here. What are all of those activists seeing? Well, at today’s share price of ~$3.60, YuMe has a market cap of ~$125m. Yume’s net cash balance is ~$65m, giving YuMe an EV of just ~$60m. In 2016, the company did $11m in adjusted EBITDA, so YuMe is currently trading for just 6x EV / LTM adjusted EBITDA. Looking forward, YuMe has indicated they’ve cut ~$14m of annual cost and it seems like revenue should start growing again this year, so it’s entirely reasonable to think the company could do ~$20m in adjusted EBITDA this year and is currently trading for just 3x run rate adjusted EBITDA. Now, that adjusted EBITDA adds back $8-9m of LTM stock comp, which I consider a very real cost, and YuMe also capitalizes their software spending and then adds back amortization expense to EBITDA, so the adjusted EBITDA number is a bit of an “Earnings before expenses” exercise, but it’s an ok starting point for our purposes (if you assume stock comp comes down ~$6m in annual expense under the next guys and capex + software spend stays around the $7m annual level, you’ve looking at something like $6m of annual “real” earnings”, which is still pretty cheap on a $60m EV, particularly if there are more costs to be cut or the company can resume growing).
Alright, so those numbers seem cheap; you can certainly understand why AVI would be interested in buying YuMe at those levels. And those numbers start to look even cheaper when you think about the operating leverage in YuMe’s business model- the company does ~50% gross margins and is relatively asset light. If they can start growing again, you could see earnings really inflect upwards, and while the company didn’t provide full year guidance for 2017, they certainly seemed pretty positive on the call and I would be surprised if they didn’t return to growth at some point this year (a lot of their recent revenue declines appear to have been driven by closing non-profitable foreign offices; with that behind them, the core business could show signs of growth). 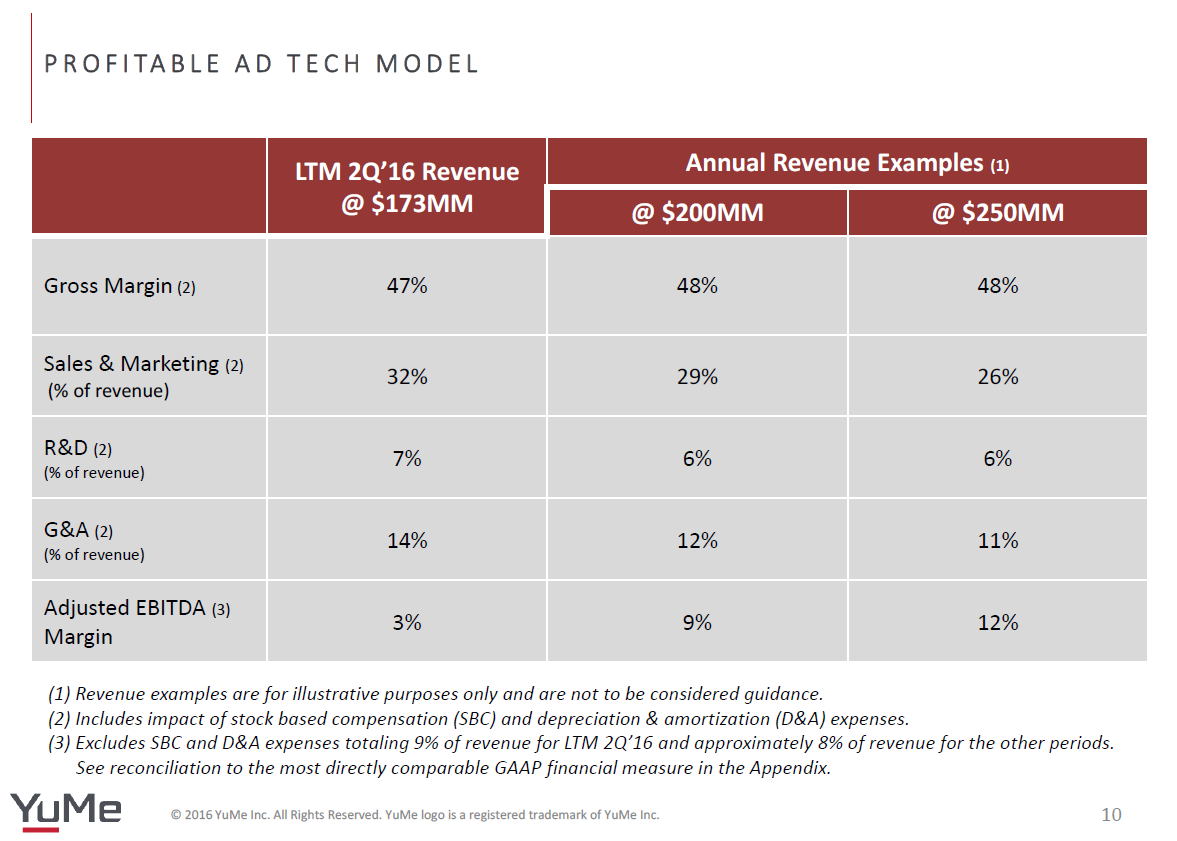 Ok, so it all seems great. At today’s prices, we’re buying YuMe at a very low multiple, earnings are about to inflect upwards, activists are going to hold the company’s feet to the fire, and they’re in a strategic process after getting an offer from a financial buyer to buy them at a price far in excess of  today’s. Surely this is a slam dunk opportunity; at the worst, we sell to the financial buyer for a profit, and at best we sell to a strategic (who can take out a ton of cost) for a huge premium, right? Heck, peer Sizmek was bought for a 65% premium, so is it really so crazy to think an AVI bid of $5/share (an almost 40% premium to today's share price) is actually too cheap for YUME?
I think all of that is a bit too optimistic. This is a really, really competitive space, and peer multiples are suggesting YuMe isn’t such a bargain. YuMe is currently trading for 0.4x LTM Revenue; 0.8x LTM GP, and 6x LTM Adjusted EBITDA. Peer Tremor Video (TRMR) trades for similar revenue and GP multiples. To be fair, TRMR is basically adjusted EBITDA breakeven while YuMe is adjusted EBITDA positive, so maybe YuMe deserves a bit of a premium, but at the same time TRMR has given a 2017 forecast that calls for pretty nice growth while YuMe has only optimistic quotes towards 2017. In addition, a big piece of YuMe’s strategy currently is growing their programmatic business; Tremor appears to have already made the switch to running off their legacy business and focusing on programmatic (see slide 6), so it could be argued that YuMe deserves to trade at a discount to Tremor given they’re probably 18 months or so behind Tremor in the switch to programmatic.
Acquisition multiples also don’t lend a ton of hope here. Edenbrook’s valuation mentions peer Sizmek getting acquired for 9x EBITDA, but I’m not sure I agree with that number. You can see Sizmek’s acquisition docs here. P. 32 the shows management’s forecasts for the business. Those numbers had Sizmek doing ~$20m in adjusted EBITDA (operating income plus stock comp plus D&A) in 2016 and $36m in 2017. Based on those numbers and an EV of ~$77m ($115m market cap at takeout price of $3.90 less $37m in cash), Sizmek sold themselves for ~3.8x EV / 2016E Adj. EBITDA and 2.1x EV / 2017E EBITDA (~0.4x 2016E rev and 0.7x 2016E GP). Those multiples are relatively in line with YuMe and Tremor’s multiples at today’s prices. It’s possible Vector stole Sizmek from shareholders and those multiples are just way too low, but the low multiples across the board should definitely raise a red flag and suggest that YuMe might not be quite as cheap as it seems on the surface.
In fact, Sizmek as a whole should probably serve as a big warning to investors in YuMe. It had a ton in common with YuMe: a company in the same line of business that had attracted value investors given its similarly low multiples and recent share buybacks. However, if you read through the merger background for Sizmek, it becomes clear that acquirers were not walking but running away from Sizmek after taking a look under its hood. Perhaps the market is correctly pricing in YuMe, Tremor, and Sizmek as value traps doomed to fall to larger players and newer technologies, and value investors / activists are getting suckered into the companies by their low multiples despite plenty of evidence that there’s no value here.
Overall, I like YuMe; it’s tough not to like a company that has been mismanaged for years where activists have taken control and are slashing costs / running a process. But this is a competitive and rapidly evolving space, and both the market and interested acquirers are pricing these businesses like the competition is going to decimate them.  I’m not sure I have a deep enough understanding of the market or the business models to intelligently disagree with the market here, so while I like YuMe and want to like it more, this is a very small position for me. I’d be happy to be talked out of the position or into a larger one if any readers have a particularly deep knowledge of the space or company; feel free to drop a comment or send me an email.