Part 1 of this post was a long winded introduction to the SPAC space. This post (part 2) will focus on Pace / Playa specifically.
Anyway, Pace Holdings is an SPAC raised in September 2015 by TPG Capital. In December, they entered an agreement to merge w/ Playa Holdings; the merger was approved on March 1 and should close by mid-March.
Playa operates all-inclusive resorts, mainly in Mexico (~63.2% of revenue is from Mexico). They think they have several significant competitive advantages, including their locations (they argue prime beach front properties are rare and preclude new entrants) and their model (they think all-inclusive gives better economics, higher occupancy, better visibility). Playa was formed in 2013, and one of the most interesting things about them is their relationship with the Hyatt brand. Hyatt and Playa worked together to create Hyatt’s all-inclusive brands (Ziva and Zilara), and Playa is currently those brands only franchisee.
I’d encourage you to both read the definitive proxy and flip through their IR presentation for a full overview, but I think there’s a lot to like about the deal. 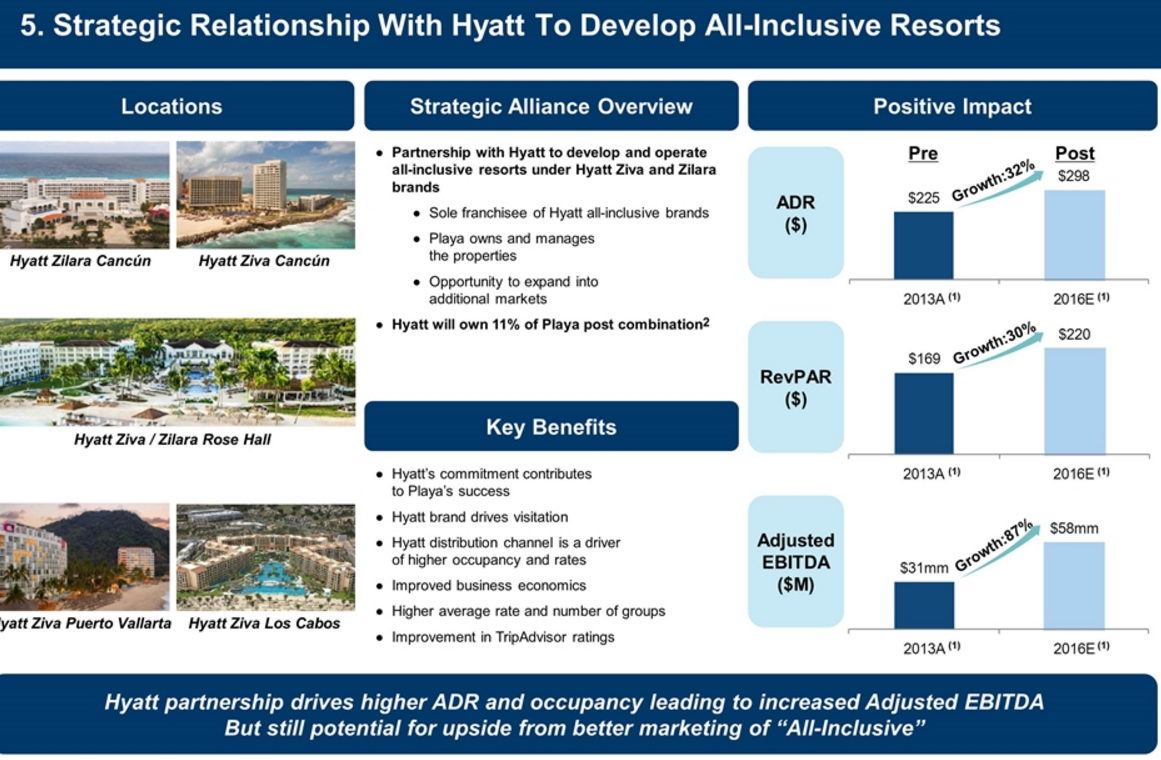 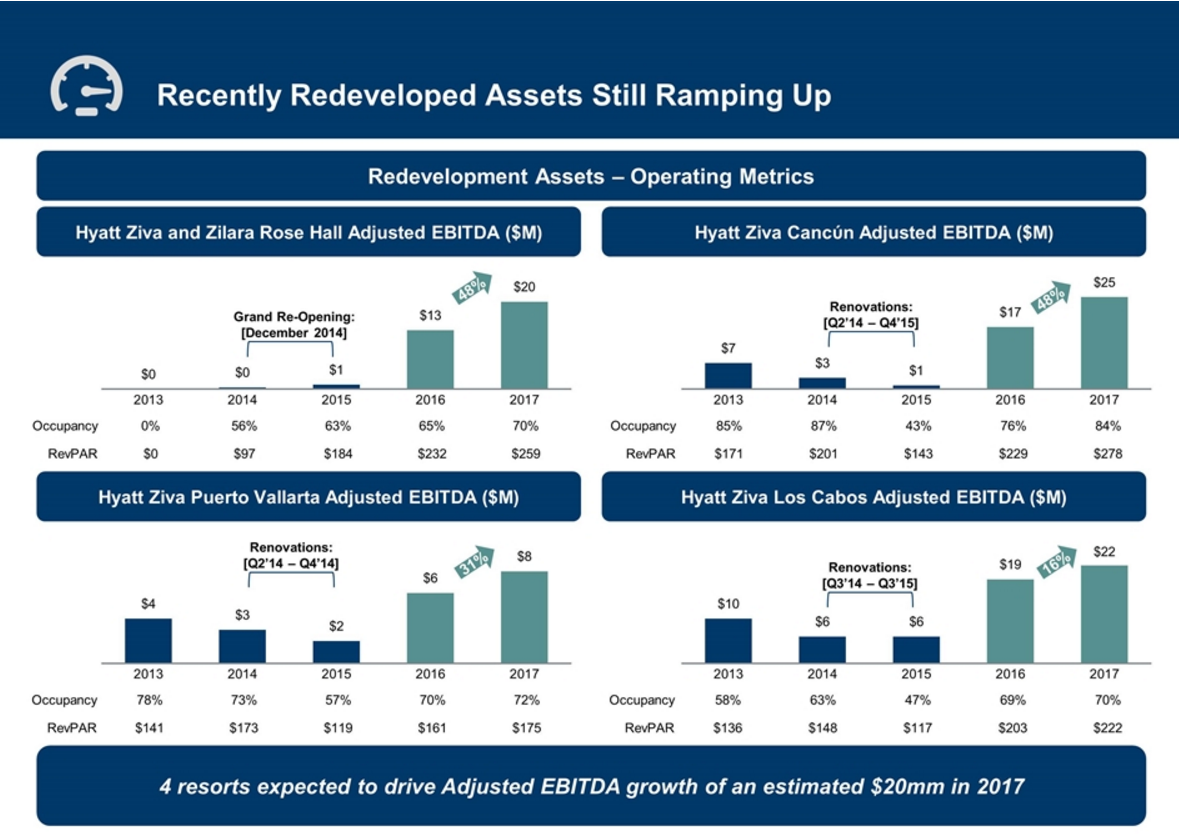 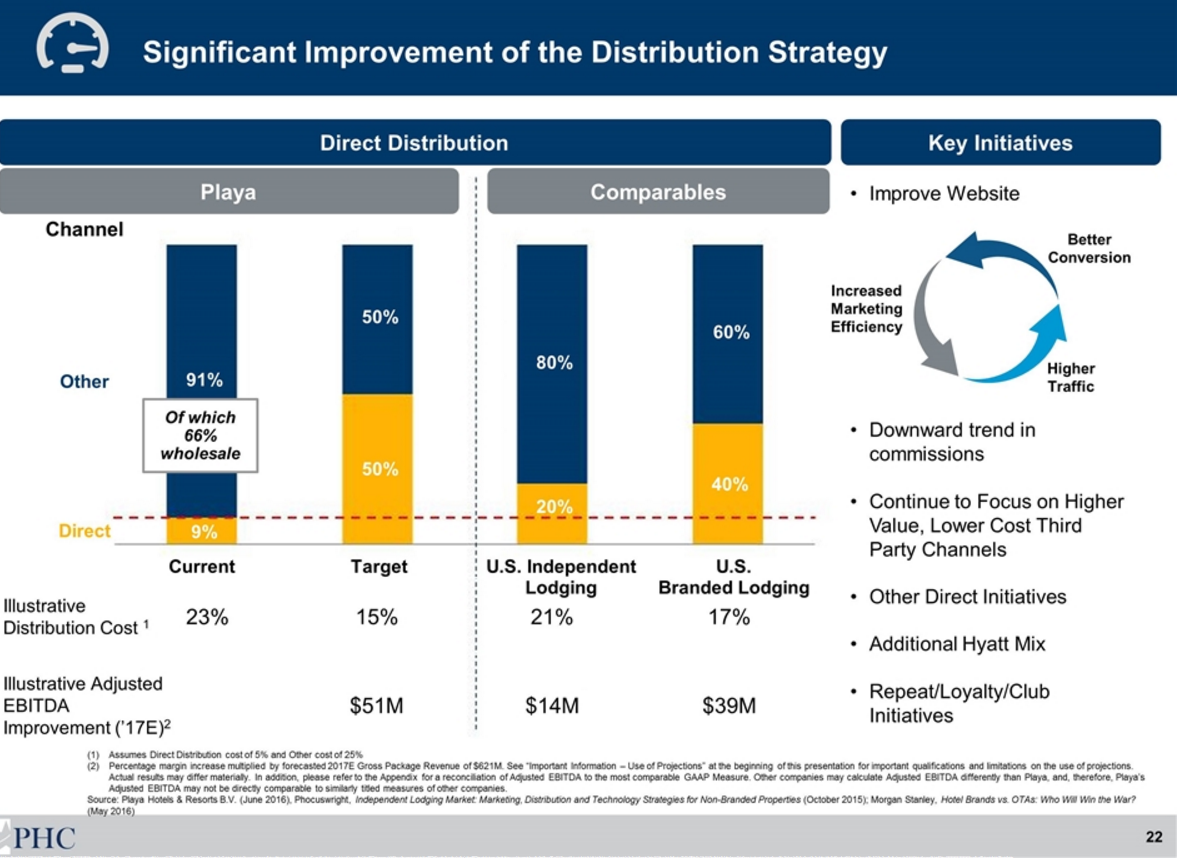 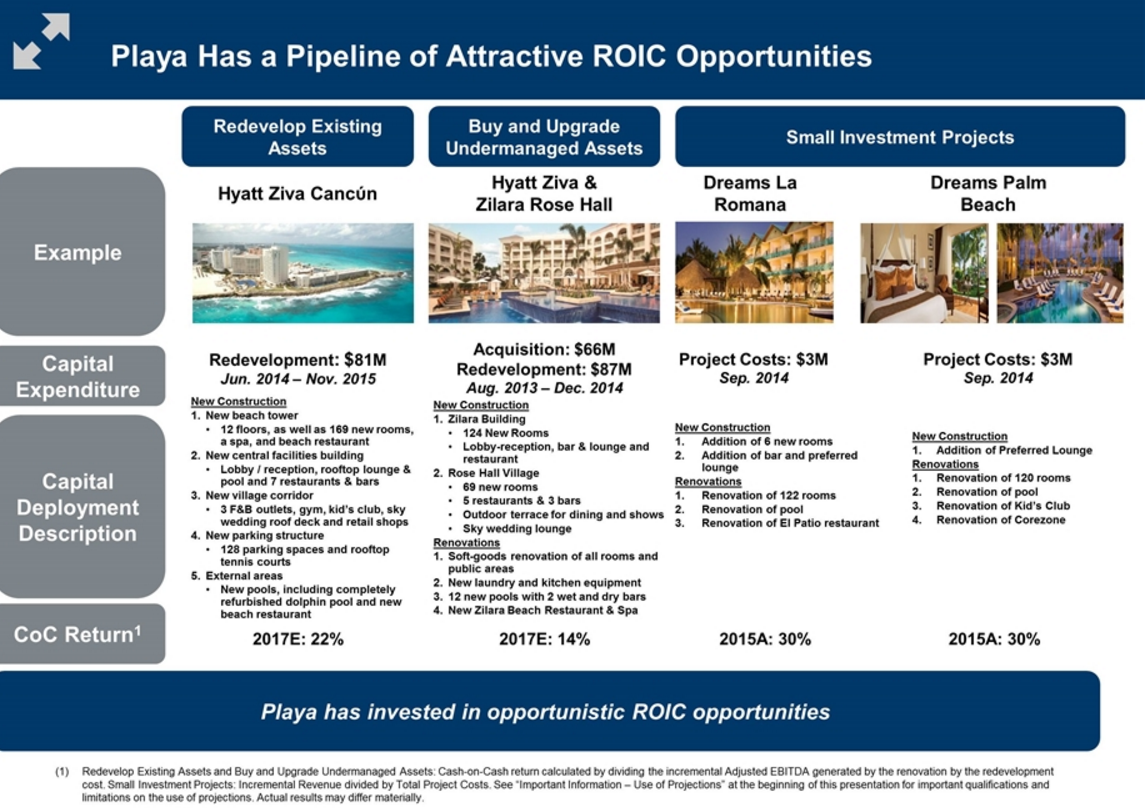 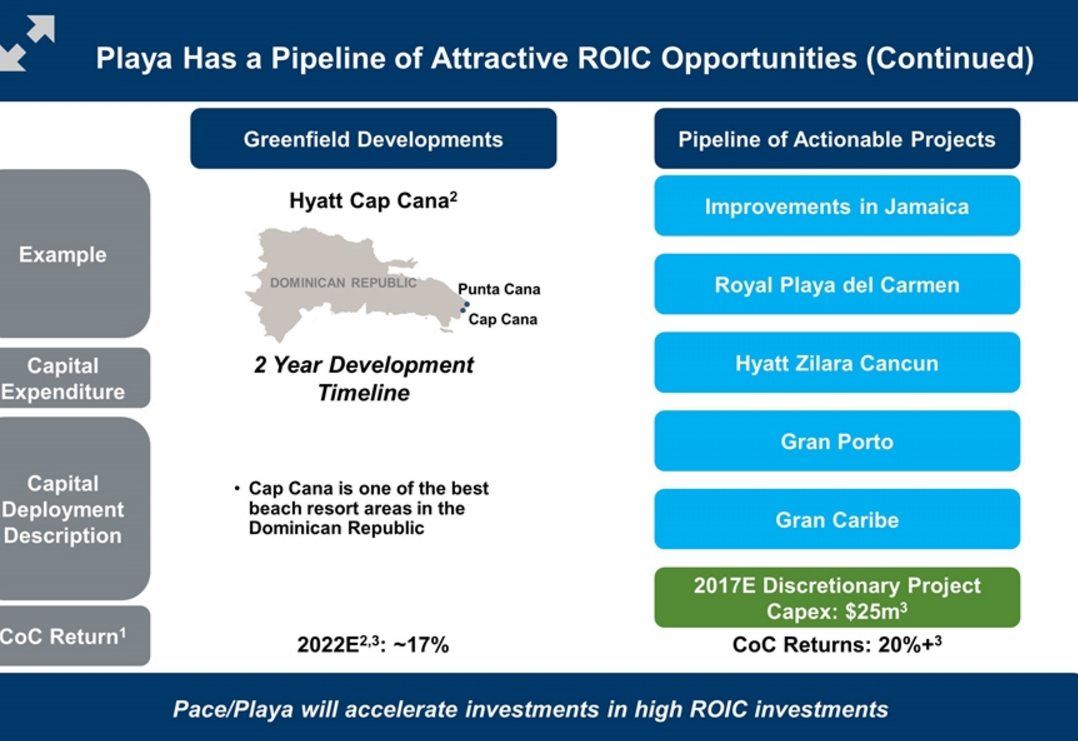 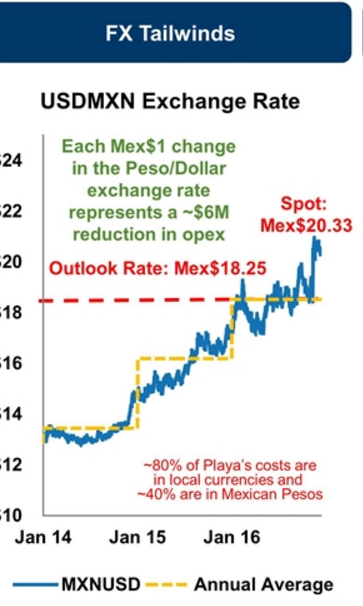 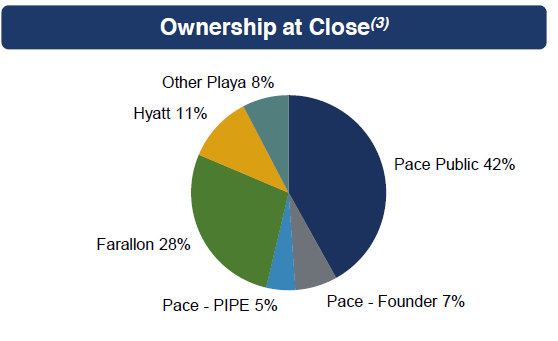 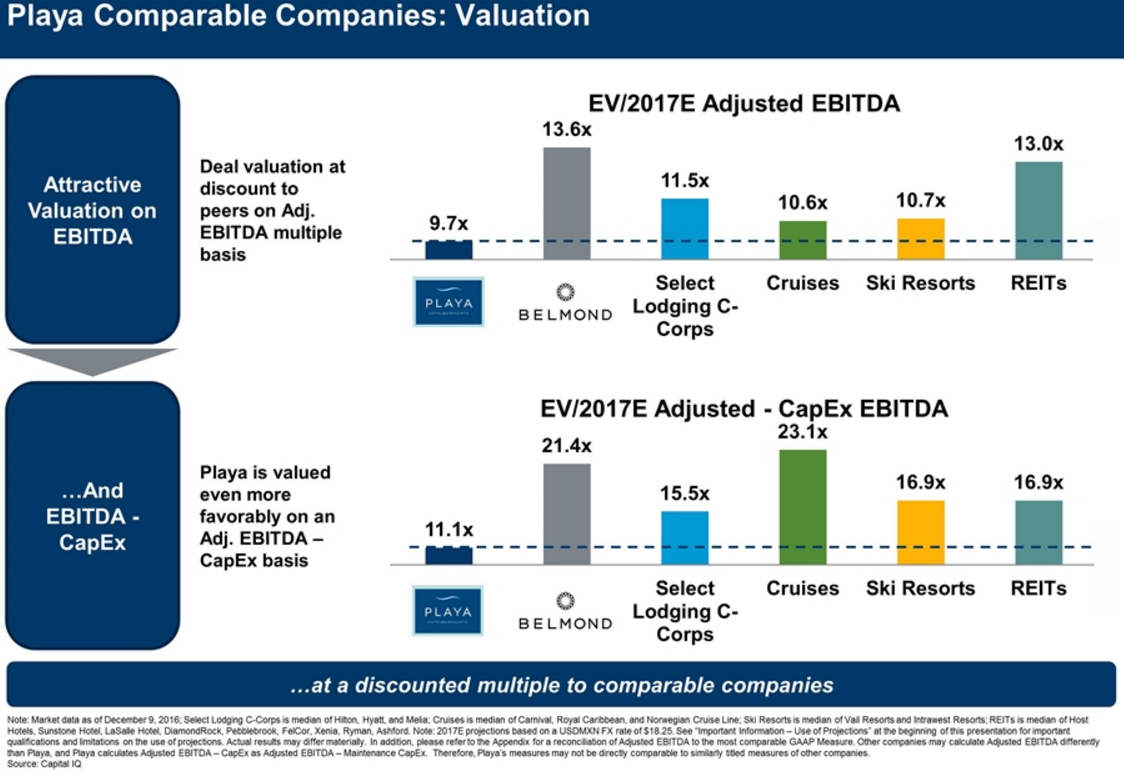 Ok, so clearly I’m seeing a lot of positives. So what’s holding me back on the company?
First and foremost, you have to come back to those old SPAC incentives. Pace clearly wanted to get a deal done; heck, their proxy even says they submitted a non-binding letter of intent to another target (see p. 114). It’s tough to think this deal is that fantastic when they were actively negotiating another deal around the same time they were looking at this one.
And then you have to wonder about incentives for Pace’s manager, TPG. TPG runs a massive private equity fund, which generally gets 2 and 20 on any deals they do. How do they decide to do a deal using the Pace SPAC shell versus in one of their funds? Is it possible that they save the juiciest, highest return opps for their private equity fund and use their “b” ideas for the SPAC, where they get paid more based on deal completion (through the founder’s shares) versus actually finding a good deal with a ton of upside?
It’s also pretty clear that Playa was “dressing” itself up to be sold. Remember, Playa had filed an S-1 for an IPO before agreeing to merge with Pace. Their whole pitch, both as an IPO and in their Playa merger, is that they’ll be a growth company that can make high ROI investments in both improving their current properties and buying up other properties. That’s a great pitch, but the company completely shut off growth capex in 2016.  Why would they defer high ROI investments in 2016? Is it possible they don’t have as much long term confidence in the business and wanted to reach a deal before the questionable returns of growth capex revealed itself? Or did they simply want to look the best on the chart below, where they compare they define their FCF conversion as EBITDA less maintenance capex and define it for everyone else as EBITDA less all capex. Since MCX = capex for 2016, they can claim w/ a straight face they aren’t really gaming these numbers.

There are plenty of other things to be concerned about here. 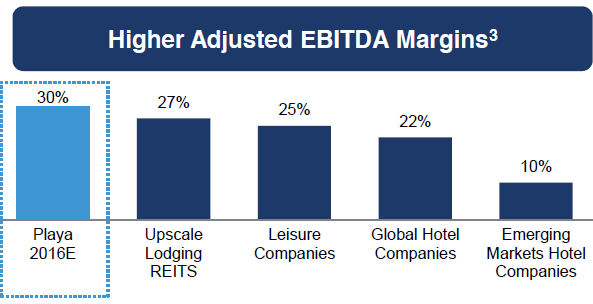 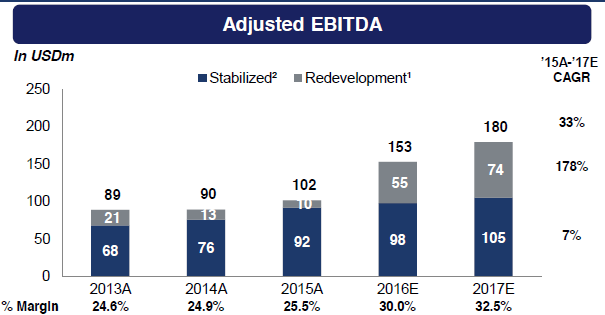 But ultimately, to me the question comes down to the SPAC question: is this actually a good business with a real growth story, or was this prettied up to lure people in at a high valuation. I have bet that it’s the former, not the later, but it’s a small, nervous bet. I’m hoping to add to it if my conviction increases that this is real, or quickly sell out if there are early “growth hiccups”, as they could be a sign that this really was just dressed up to get a deal done.
Before wrapping up, a note on the warrants versus the stock. I noted in my SPAC overview that I thought there might be “forced sellers” of SPAC warrants after deal completion. I can’t help but wonder if I’m not the only one who noticed that and the pendulum has swung too far in the other direction, because PACE’s warrants are awfully expensive. PACE’s warrants are not normal warrants with a one for one expiration; it takes 3 pace warrants to buy one share of stock at $11.50. In addition, the warrants cap out at $18/share (the company can call them if the share price exceeds that level). So the warrants have a max payoff of ((18 – 11.50) / 3) = ~$2.17. There are a lot of different ways to cut it, but the bottom line to me is that the $18 call is a very real cost*, and at today’s price of ~$0.80/warrant the warrants seem to be pricing in a very rosy future or assuming this will be an incredibly volatile stock. I own a bit of both the stock and warrants, but at today’s prices I think the stock makes more sense than the warrants to be honest.
*I think using black scholes on a five year warrant implies a level of mathematical precision that doesn’t exist in the real world, but if I plug an $18 call w/ a 5 year strike (the warrants expire 5 years after the deal closes) and assume 40% volatility, the $18 call feature is worth ~$0.57/warrant (also adjusted for the 3 warrants for 1 share feature).  It starts to become a little circular (i.e. higher vol = lower value for the $18.50 call = lower implied price for standalone warrant), but if you add that $0.57 price back to today’s warrant price of ~$0.80, the warrants would be trading for $1.37/share without the call, which implies roughly 47% volatility. That seems pretty high to me.

Super interesting color. Do you have any insights into past TPG SPACs and their success rates - as well as TPG's past experience/ability to spot, grow, support, or realize hospitality bargains?

Super interesting color. Do you have any insights into past TPG SPACs and their success rates - as well as TPG's past experience/ability to spot, grow, support, or realize hospitality bargains?