Note: I wrote this in mid-April before the Claims sale officially went through and Richter left in early May, but I think both of those are just confirmatory of the thesis below.

I originally wrote up Hill (HIL; disclosure: long) in January 2016. A lot has changed since then, but a pending sale of the Construction Claims group and the potential for activists to fully take control of the board this summer should position the company well as a strategic target in an industry that is seeing rapid consolidation at big premiums.
A quick review: in 2015, DC Capital offered to buy Hill for a big premium ($5.50/share, a 40%+ premium). Management immediately rejected the offer and refused to negotiate. This lead to a bruising proxy fight with Bulldog, who wanted the company to hire an investment banker and pursue a sale / auction. Management eventually won the proxy by promising to cut costs, increase margins, and improve shareholder returns. Almost immediately after winning the proxy fight, management backed off their promises of improved margins / cost cutting made to shareholders and announced a massive restatement of their past results. By January 2016, HIL’s shares were trading for ~$3/share, and my investment thesis at the time was activists would run another slate in 2016, defeat management, and eventually the company would be put up for sale. 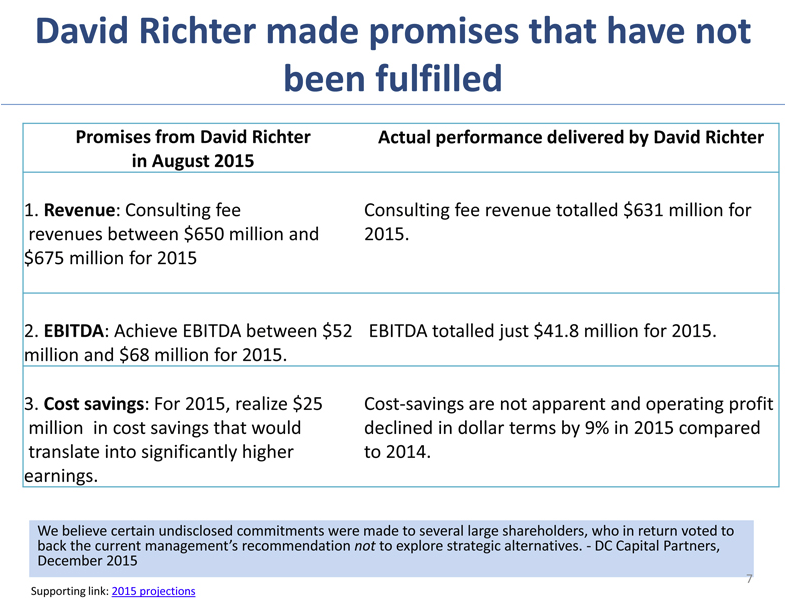 2016 played out about as expected. Bulldog ran another slate and pointed out the company’s failure to live up to their promises. Management fought tooth and nail to beat the activists, including postponing the company’s annual meeting at the last second when it was clear they would lose,  but Hill eventually settled and put Bulldog’s nominees on the board; as part of that move, Irv Richter (the father) retired and Craig Martin eventually replaced David Richter (the son / CEO) as Chairman. In late 2016, Hill announced a game changer: they were selling their Construction Claims Group for $147m, and the proceeds would be used to pay down all of the company’s debt. The stock responded positively to the news, running from the mid $3s to over $5.50/share as the market forecasted the new Hill could slash SG&A and materially improve profitability while eventually serving as an attractive take out candidate to a variety of buyers in an industry that was undergoing rapid consolidation at big premiums.
However, shares have sold off significantly in the past month on two concerns. 1) The company reported disappointing earnings for FY16 / outlook for FY17 and 2) continued delays in the closing of the Construction group have raised questions over if the deal will close. I think both concerns are a bit overblown and shares today represent a very attractive proposition for a company that will likely be taken out at a big premium in the next year or so.
Let’s start with the Construction Group delays. Hill announced the construction sale on December 20th and said the deal was “expected to close in approximately 60 days.” The contract does not have a break-up fee in the event it can’t close, and when pressed on this fact on the analyst call following the deal’s announcement management said they didn’t think they needed one because they expected the deal to close in February and didn’t think Bridgepoint would walk away. On the same call, they also mentioned the contract extended out to May, but they viewed closing in May as a worst case scenario and reiterated they thought they deal would close in February.
On March 8, Hill delayed the announcement of their FY16 earnings and guided that the Claims sale would close on March 31. On March 23, they further delayed close until April 30. It’s now approaching late April and we haven’t heard anything on the deals close, so it’s understandable if the market is starting to get a bit worried on the likelihood of closing.
The risk here is real. Hill noted that they had shopped the Construction Group for more than a year, and they appear to be getting a good price for the Claims group (just under 8x EBTIDA; ~13x LTM operating income), particularly given results seem to have continued to weaken since signing the deal. A large part of my investment thesis in the “new” Hill rests on the company being an attractive strategic acquisition candidate with a clean balance sheet, and that’s no longer the case if the deal falls apart. Put it all together, and for the deal to fall through now would be a significant setback for the company.
The other reason I believe shares have sold off are disappointing FY16 earnings / weak FY17 outlook. Hill originally was scheduled to report their earnings on March 9; however, they delayed their earnings release to look into tax issues associated with the Claims group sale. The company announced results on March 29th, and they were, quite frankly, awful. Backlog was down 6-7% from three months prior, the company gave guidance for mid-single digit revenue declines in FY17, the company called out unusual amounts of bad debt expense in Q4’16 (a worrying sign given the company’s history of writing off A/R), and management refused to provide details around potential corporate cost cuts in the wake of the Claims Group sale despite promising to do so when they held the Claims M&A call in December. In addition, the poor Q4’16 results caused a default on some financial covenants, though the company got a waiver for the default (plus the debt will go away once the Claims sale is completed).
So things certainly look cloudy for Hill currently. But while the headlines certainly look bad, I think it’s resulted in an extremely cheap stock at today’s prices with multiple ways for an investor to win.
First, let’s start with valuation. Below is Hill’s capital structure assuming the Claims sale goes through and all debt is paid down (on left) and assuming the sale doesn’t go through so the debt stays outstanding (on right). 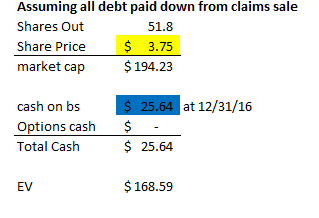 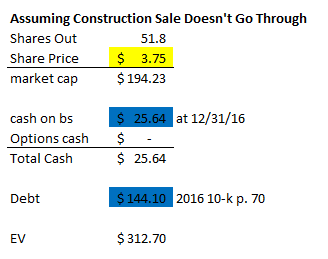 There’s reason to believe that EV might be a bit overstated, as management suggested on their Q4’16 earnings call that they had seen some drawdown of A/R through Q1. Indeed, their 10-k notes that they’ve received $6.153m in accounts recievable payment in Q1 (see p. 28), which is pretty signficant against a ~$170m EV.
Anyway, the first reason to believe HIL is cheap is looking through to the segment profitability. Below is the company’s operating profit by segment / region (from the 2016 10-k p. 88).

Both the U.S. and Middle East are extremely profitable as standalone divisions; their profitability is simply masked by high overhead (corporate) costs. As I mentioned in my January 2016 write up, I think there’s significant opportunity to cut costs at HIL, so the high costs represent opportunity for HIL shareholders. Management has been pretty clear the corporate cost burden represents shared costs for two divisions and that there’s an opportunity to cut after the claims group deal closes. Second, most of these costs would likely go away if HIL were sold to a strategic acquirer, so the synergy potential / premium a buyer could pay in a deal is extremely high.
Related to the corporate cost cutting opp, the second reason to believe HIL is extremely cheap is thinking about long term margins on today’s revenue. I believe HIL should do ~8% EBITDA margins on the lower end once they’ve cut costs and right sized the business; if that’s right, then they should be capable of doing ~$32-34m in EBITDA based on 2017’s revenue estimates. The business is a relatively capital light one so EBITDA translates well into FCF, so at today’s EV of ~$170m you’d be buying the company for a mid-single digit multiple of unlevered cash flow. I base my belief HIL can do ~8% EBITDA margins on the following things:

The third reason to think HIL is cheap is to look at the spate of recent deals in the space. TRC (ticker: TRR) sold to private equity firm New Mountain Capital for a 47% premium at the end of March in a deal that values them at 13-14x EBITDA; importantly, TRC will remain a standalone business, so New Mountain was willing to pay a significant premium despite having no potential for operating synergies (in addition, their proxy reveals there was significant competition to buy TRC). WS Atkins just sold for a 35-40% premium to SNC-Lavalin in a deal valued at ~11x EBITDA, and it had been previously rumored other strategics were interested in Atkins (here’s an article going into the sale a bit more deeply). DealReporter suggested CH2M, Aecom, and Jacobs could all be interested in topping SNC’s Atkins bid; all of them are above Hill on the U.S. Project Management company list and would be natural acquirers of Hill with significant potential synergies. Looking at bolt on acquisitions, TRC acquired Wilbros Professional Services for $130m in late 2015; again, this isn’t a perfect comp and TRC was clearly forecasting a ton of synergies but at valuation multiples of ~0.8x service revenue and over 3.5x gross profit the deal would imply a value more than double today’s share price.

Thanks for pointing that out. I enjoyed reading your blog post on Hill.

The third bullet pretty clearly states "I wrote this in mid-April before the Claims sale officially went through and Richter left in early May, but I think both of those are just confirmatory of the thesis below."

When was this originally written? Hill announced the completion of the CCG sale last Friday.