So sorry for the lack of posts recently; I have been working on a few things that, for one reason or another, I didn't want to post on the blog. I'd expect a few more in the near future.
Last week, Marlin closed on its deal to buy Tangoe (TNGO) for $6.50/share. We had acquired a position in the stock in late March at ~$5/share (unfortunately, it was a rather small position). Because historical case studies can be educational, I've posted my rough working thesis from late March below. Enjoy!
Tangoe (TNGO; disclosure: long) is interesting in that it hits two categories that frequently result in indiscriminate selling: it’s undergoing an accounting restatement / it’s more than a year behind on its financial filings (they still haven’t filed their 2015 10-k), and they were recently kicked from the NASDAQ + unceremoniously dropped from the indices. It’s also interesting because the company has received not one but two acquisition offers so far this year yet trades at a large discount to both of the offers. Given how long it’s been since the company’s filed financials (their last financials were from Q3’15) and the two bids at a large premium on the table, the range of outcomes here is pretty wide. The company could file financials that show the business is doing better than expected and see shares go through the roof. The company could file financials that shows the whole thing is a house of cards and sends shares collapsing. The company could be acquired for a big premium in the next month or so. Just about anything’s on the table, but I tend to think the range of outcomes skews much more positive than negative at these prices.
Let’s start with a quick overview. Tangoe provides connection lifecycle management (CLM) software and services. To simplify it, Tangoe helps enterprises manage their budget of things like mobile phones and cloud software. They’ll help companies identify and resolve billing errors, track cell phones they’ve given to their employees, accurately pay vendors, etc. An example might be best: Tangoe has specialized expense management that takes bills from vendors of large corporations, automates the process of approving and auditing those bills, and then automatically puts the bills into what allocation software the customer uses. Or if you’re an employee looking to upgrade your corporate cell phone, you’d use Tangoe’s offering to put in and manage the request.
Tangoe IPO’d in 2011. Driven by ~$82m in acquisitions from FY11-FY14, the company grew quickly, going from ~$68m in revenue in 2010 to $105m in 2011 and $212m in 2014. Things started to crack in FY15, as weak earnings and outlook in both Q2’15 and Q3’15 sent the stock into the high single digits. However, the worst was yet to come for investors. In March 2016, the company announced they would need to restate their financials for FY13&14 plus the first three quarters of 2015 and they wouldn’t be able to file their 2015 10-K. It’s now more than a year later, and Tangoe still hasn’t been able to get their financial house in order or file their financials. In fact, other than telling us how bad the restatements will be and providing updated cash and debt balances, Tangoe has provided investors exactly zero updates on how their business is performing. Sales could be down 75% or up 4x and we’d have no real idea. In response to TNGO’s continued inability to file financials, Nasdaq decided to kick Tangoe off the exchange on March 10th 2017 (effective March 14th).
Ok, so things obviously look awful from a reporting / information standpoint. So why do I think there could be opportunity here?
First, the exchange kick has likely created a bunch of uneconomic selling. Some funds simply can’t own non-exchange traded stocks, and in addition to getting kicked off the exchanges, Tangoe was kicked out of several indices (see here and here). We can see good signs of that uneconomic selling in Tangoe’s price and volume since the kick was announced. Tangoe has traditionally traded 75-100k shares per day; in the 4 days post kick (starting march 13th), Tangoe traded 3.3m, 2m, 8m, and 2.3m shares. Over that time frame, the stock sank from ~$5.80 in the days before the kick to today’s prices below $5. 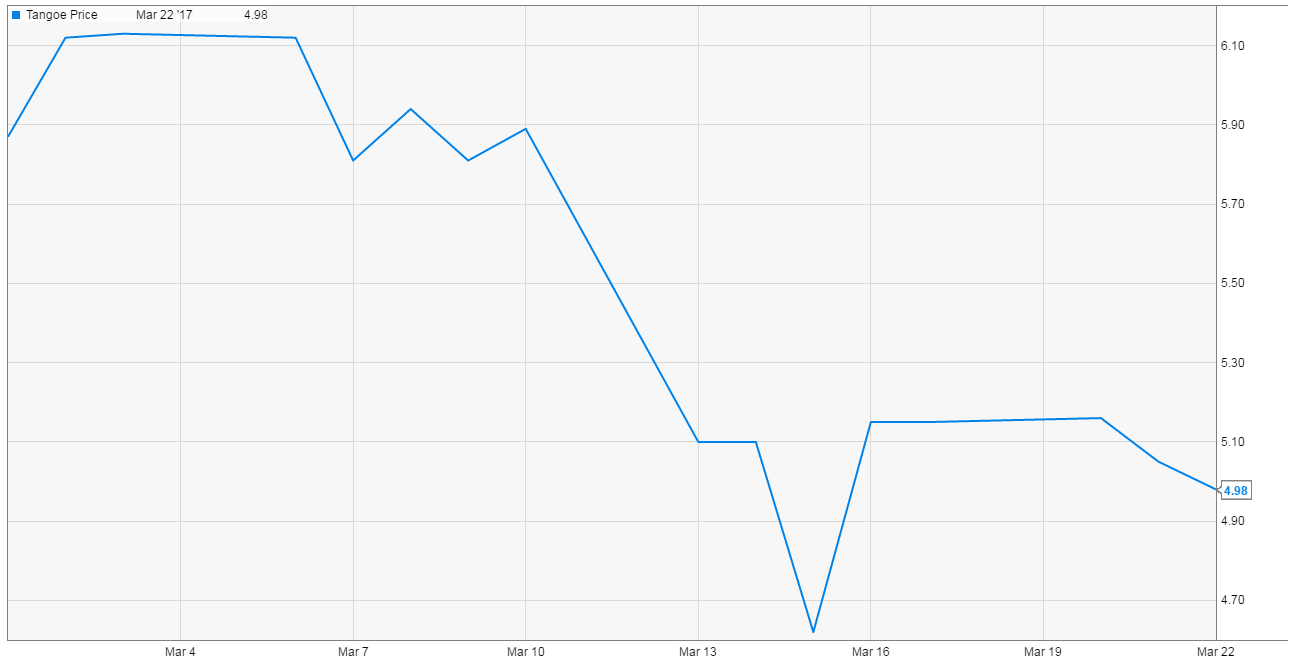 Second, we have several parties who likely have significantly better information than us who were buying the stock at levels much higher than today’s prices and who have offered to take the company private at a big premium to today’s prices. In the wake of the Q3’15 miss, two private equity firms (Clearlake and Vector) started buying up shares of TNGO at prices ranging from ~$7.00 - $8.50. They were joined by a third PE fund, Marlin, in the wake of TNGO’s initial 10-k delay in March 2015. Today, Marlin owns ~10% of TNGO, Clearlake owns 15%, and Vector owns 10%. At the start of the year, Marlin lobbed in a bid to buy all of TNGO for $7.50/share, and Clealake and Vector partnered up to lob in their own bid of $7/share. Clearly, these funds see some value in TNGO to buy up such big stakes in the market and spend the time necessary to put together bids.
So what is it exactly they see in TNGO? I can’t claim to be an expert in the space, but there are clearly some signs of a good / interesting business here. The 2014 10-K mentions that customer retention rates are higher than 90%, and most of the company’s revenue comes in the form of recurring revenues (private equity companies love stable / sticky recurring revenues as they result in strong, consistent cash flows that you can put a ton of debt on). There are signs that TNGO’s business model would scale up nicely to generate a significant amount of cash as it matures. 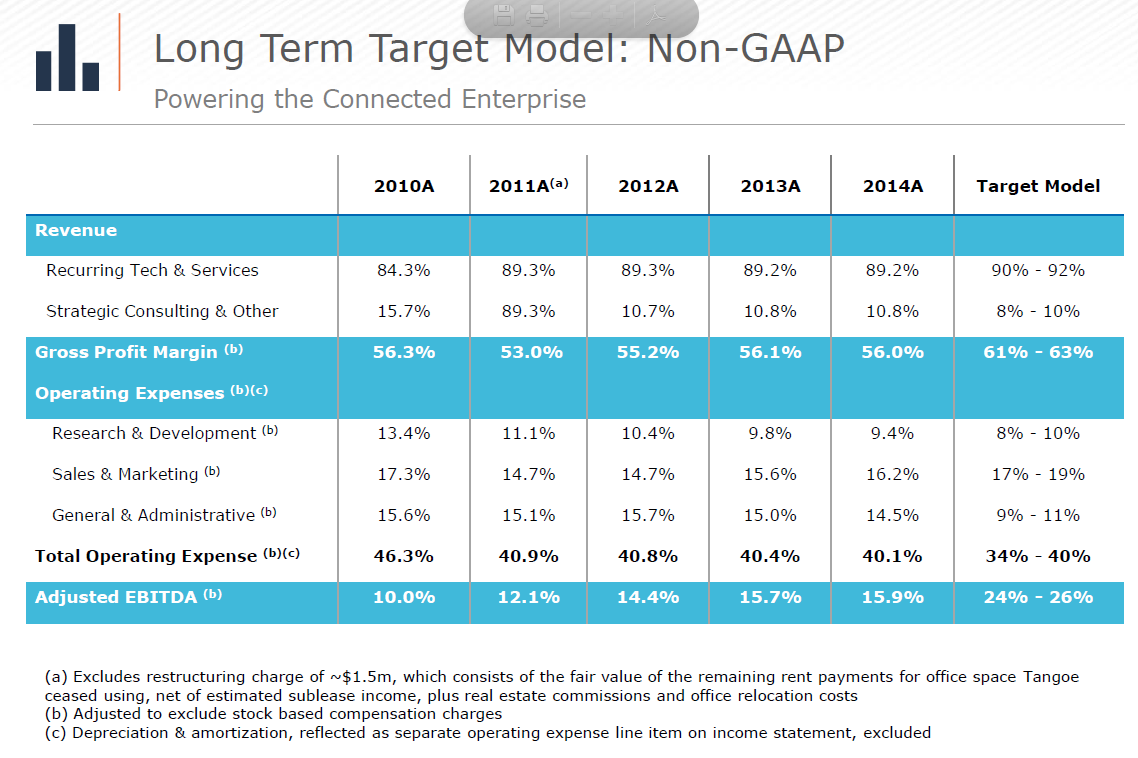 If you go through old analyst calls and conference presentations, you can find plenty of other things to like about Tangoe. Of course, all of these things assume you believe what management was saying and that the restatement doesn’t change some of the things below, but in general I do think these are interesting facts / statements.

I also think the activist have to be thinking a bit about the price they’re getting here as a relative bargain. At today’s price of ~$5, TNGO is trading for a market cap of ~$200m. The company has a bit of excess cash on their balance sheet, but for ease we’ll just assume market cap = EV. Obviously we don’t know how the company is performing, but given 90%+ customer retention our best guess as a base case is probably that the business currently looks about like it did in the most recent twelve months of financials we have (i.e. for the twelve months ending Q3’15). After the restatement, TNGO did ~$210m in LTM revenue. TNGO was doing ~53% GMs before the restatement; if we assume all of the restatement revenue drops straight down as a reduction in gross profit (probably a bit aggressive; roughly 50% of the restated revenue will be recognized in later periods), they’d become a ~50% GM business and have done LTM gross profit of ~$105m. Clearly the business has hair on it, and SG&A expenses are real, but a PE firm has to be looking at the ability to buy $105m in gross profit for $200m today (or $275m at $7/share) and licking their lips at the cash flow they can turn that into after cutting SG&A to the bone. Tangoe also sells to >30% of the Fortune 500; for a strategic, access to a software product  with recurring revenues embedded in a significant amount of the Fortune 500 is probably worth a significant amount of money just for the cross selling potential alone. 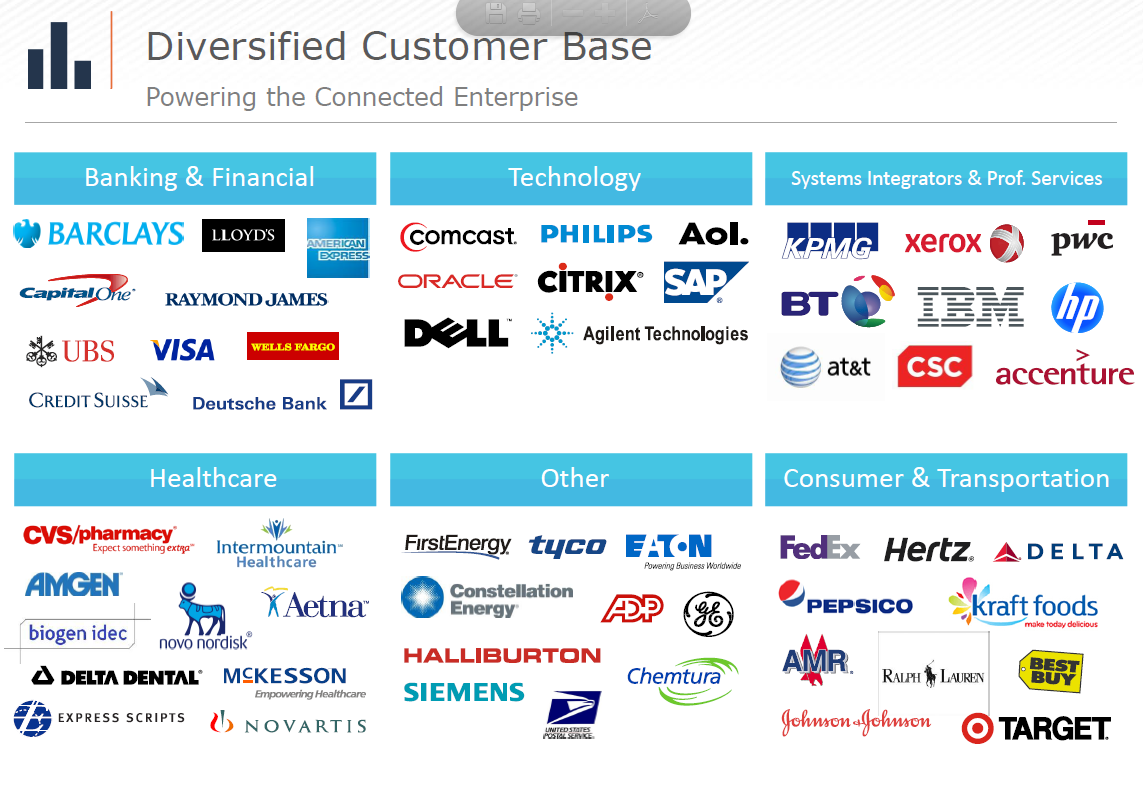 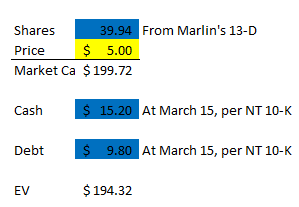 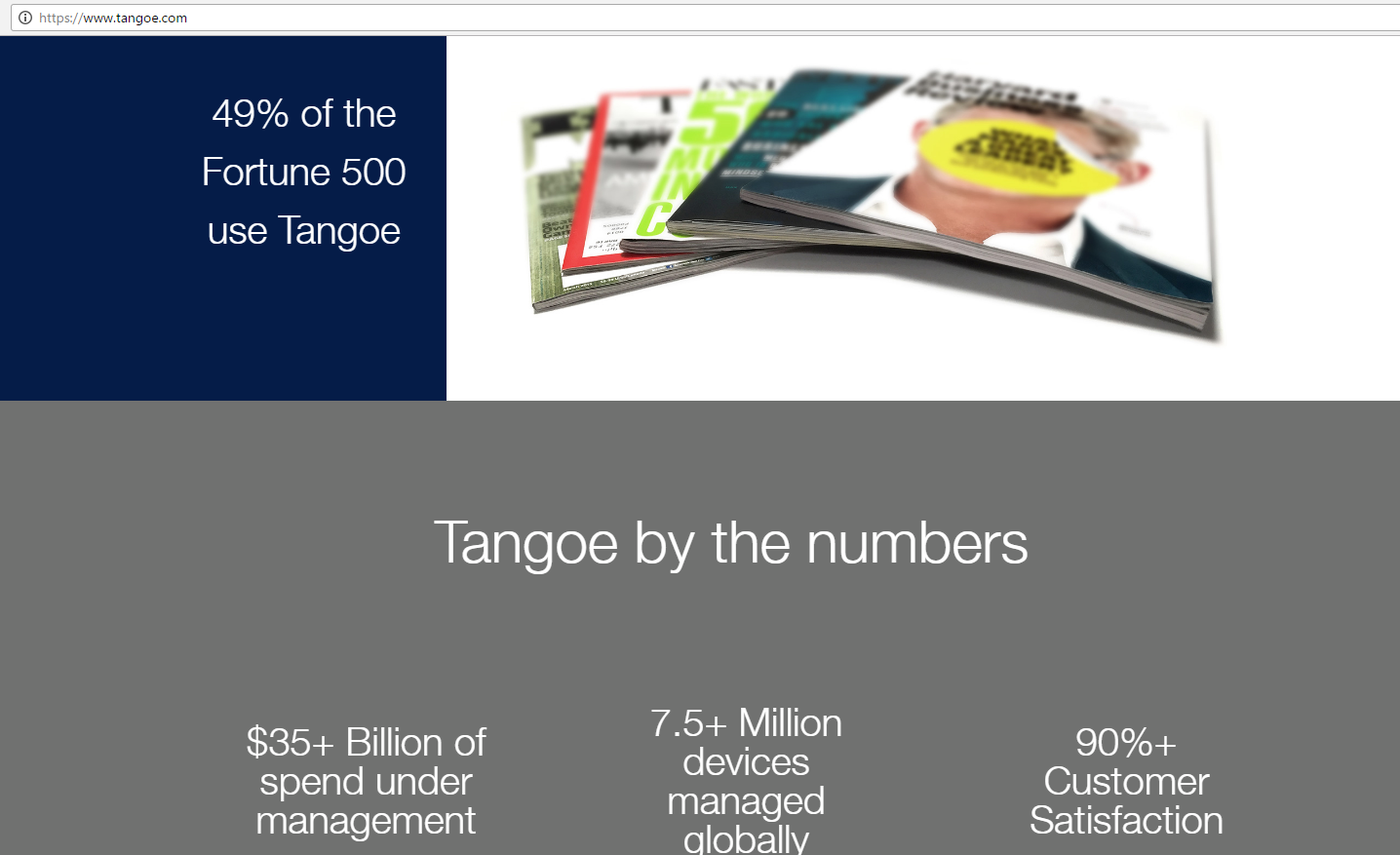 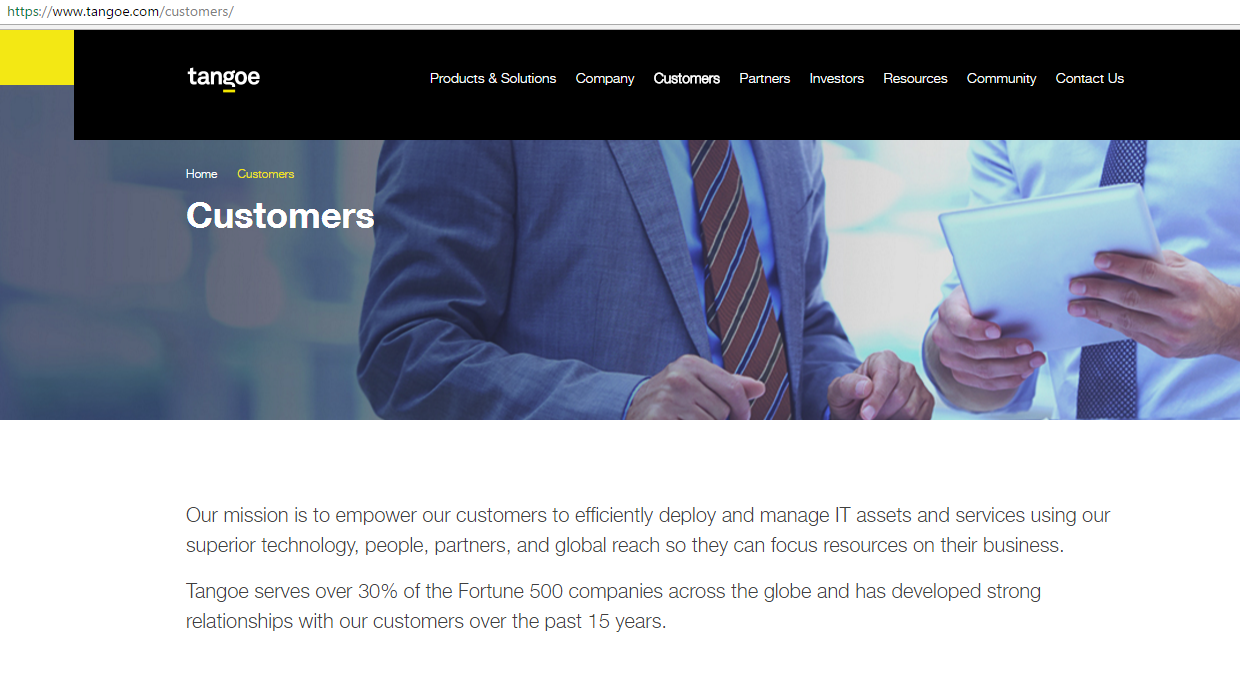