Charter: A levered return of capital story for the ages $CHTR

Charter (CHTR; disclosure: I am net long this through different pieces of the Liberty complex) is a pretty well-known value stock; if you go check out the John Malone fanboy site also known as ValueInvestorsClub.com, you can find plenty of write ups and history on it and all of its different Liberty iterations. Despite what a hedge fund hotel Charter is, it’s one of my favorite investments today (through the different Liberty complexes). Because it’s so well covered, I wasn’t going to post anything on the blog, but I wanted to quickly highlight one thing that I think the market is missing: just how fast Charter is buying back their own shares.
A quick overview on the upside thesis for Charter: after the merger with Time Warner Cable, Charter is the second largest cable company in the U.S. (Cox belongs in the chart below as well, but they're private so I didn't include them). 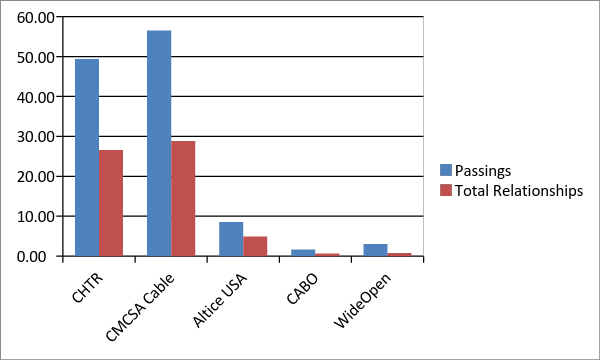 Cable should be a bit of a game of scale: as you get larger, you can get better pricing on your video contracts, spread your back office fixed costs over a larger base, and squeeze your suppliers a bit on pricing. Despite being the second largest player, Charter’s EBTIDA margins and capex levels are more in line with regional players (this is a bit of an oversimplification given a lot of smaller players are dropping lower margin video products, but it gets the point across). 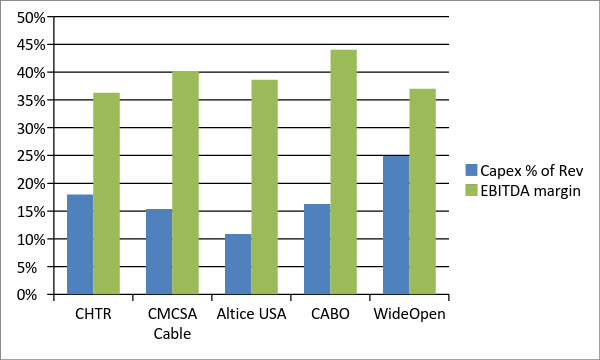 Digging deeper than simple margins, cable is often judged on its profit per home passed or profit per relationship. Charter lags behind peers on these metrics as well. 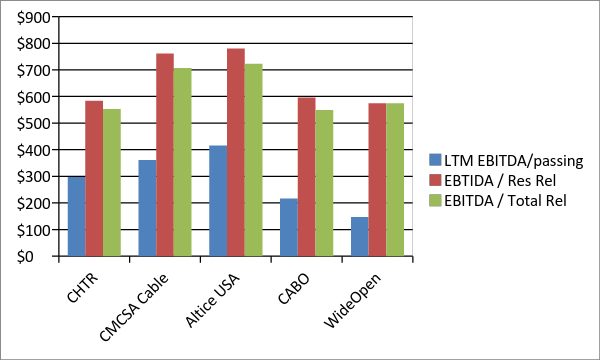 The bull thesis is that, over time, Charter should be able to approach Comcast like levels, which should drive continued strong earnings growth over the next few years. Despite that built in earnings growth, Charter trades pretty much in line with peers; for example, here’s a valuation chart comparing them to peer / recent IPO Altice that I tweeted out a few days ago. 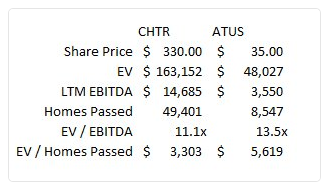 Obviously there’s a bit more to the investment thesis than all that, but that’s a pretty succinct overview. And management clearly shares that bullish view, as they never miss an opportunity to tell you how bullish they are on Charter. Here, for example, is an interview of Greg Maffei in May talking about how bullish he is, and Malone / Charter bulls love to point to CEO Tom Rutlidge’s pay package and how the bulk of his options don’t vest until Charter’s share price starts with a 4 or 5.

So, yes, management loves to talk up how bullish they are. But the great thing about Charter is that management is backing up that talk by buying gobs and gobs of shares, and I don’t think the market has caught on to just how much share repurchasing the company is doing yet.
Below are Charter’s last 3 share repurchase disclosures (from their 10-Qs and 10-ks). Look at that March 2017 share repurchase number: 2.2m shares. Charter had 309m fully diluted shares out at March 31, so if Charter held that 2.2m number steady for a full year they would retire ~8.5% of their shares in a year. That’s an insane amount of share buybacks.

Now, Charter was pretty clear that their stock price rise at the beginning of the year took their stock outside of their repurchase plan limits, so at first I thought maybe March was just a catch up for the shares they couldn’t buy in January and February. That would certainly have been a reasonable assumption; however, a few clues in their filings suggests that Charter has actually accelerated their share repurchase program since March ended; in fact, it’s within the realm of possibilities that Charter will repurchase more than 5% of their shares outstanding in Q2 alone. Obviously, if you believe Charter is undervalued, that level of share repurchase will be a rocket ship for shareholder returns as the stock approaches fair value.
Why do I think Charter accelerated their share repurchase plans? Buried on p. 18 of their most recent 10-Q is this line,
“In December 2016, the Company and A/N entered into a letter agreement (the "Letter Agreement") that requires pro rata participation by A/N and its affiliates in any repurchases of shares of Charter Class A common stock until A/N has sold shares or units totaling $537 million ($245 million has already been completed and of that total, $27 million was completed during the three months ended March 31, 2017), subject to Liberty Broadband's right of first refusal to purchase shares or units from A/N upon A/N's sale to any third party.”
Basically, at the end of every month, Charter goes to A/N and says “hey, we bought back 1% of our shares at $330/share, so we need to buy 1% of your shares at the same price to keep your ownership level constant.” And, fortunately for us, A/N has a director seat on Charter, so they need to file a form 4 that shows how many shares they sell to Charter each month. Here are their three most recent disclosures:  April 2017, May 2017, and June 2017. In May, Charter bought back 285k of A/N’s ~28m shares, or roughly 1% of their shares. In June, Charter bought back another 628k, or roughly 2.3% of A/Ns shares. Because Charter is just buying back enough shares to keep A/Ns share ownership constant, we know that Charter buying back 3.3% of A/N’s shares means Charter bought back 3.3% of their total shares outstanding. Also, because of the timing on the form 4s, we know that Charter bought back that 3.3% from April 14th (the date of their April filing) to June 9th (the date of their June filing).
However, here’s the real kicker: as of March 31, Charter had already bought back $245m of the $537m that A/N’s agreement committed them to.  The May and June filings add another $298m in share repurchase, which means that A/N no longer has to sell to Charter at the same % that Charter buys back shares. So, if A/N decided they didn’t want to sell more shares than required, it is possible that Charter actually bought back more of their shares in the mid-May through mid-June time period than the 2.3% would suggest!
So the A/N filings clearly suggest Charter is buying back shares like crazy. As further confirmation that the company has been buying like a drunken sailor (and, as a very bullish long, I mean that in the best way possible), I’d point to their recent $1.5B issuance of Sr. Secured notes. Yes, everyone loves to raise 30 year capital at ~5% interest rates, but Charter is a cash flow machine with ~$3B in cash on their balance sheet at March 31 and very easy access to the capital markets. The only reason they would need to raise debt is if they had bought back a significant amount of shares during the quarter; I would guess they needed to buy back at least $4B of shares (~4% of shares outstanding) to justify raising debt, which is completely consistent with the level of share repurchases discussed above.
To wrap this up, Charter’s been in the news a ton recently, from partnering with Comcast for a wireless partnership (and using that partnership to do something with Sprint) to a potential megamerger with Verizon. Given Liberty’s track record, I’d feel pretty confident that any deal they strike will be a huge win for shareholders. But all of that noise is just a distraction from the real prize: Charter is buying back shares like crazy at the exact moment their earnings are about to inflect upwards. As the title says, I think Charter is a levered return of capital / share buyback story for the ages.

I disagree. A lot of the capex was growth capex, which is why EBITDA has grown so much. Going forward, the heavy lifting on growth capex should be done, and we should significantly more FCF generation.

Thank you for the thorough analysis. I am a bit more cynical as to the LT viability of the GNCMA asset as a independent business. My attention keeps returning to the capital intensity of the business over the last 20 years, which consistently consumes >65% of EBITDA (industry is <50%) with interest expense consuming the rest leaves no FCF to spend. I see cumulative FCF over pick a period as very limited and negative over a 20 yr period.

All repos have been funded with debt in past 10 years but hey it outperformed the S&P500 over a 3, 5, 10, and 15 year peiod. All by doing the levered equity shrink thing of investing for or buying growth to support the incremental debt. To me it appears returns suffered calling for more capital to deliver the same level of growth causing leverage to skyrocket over the past 10 years.

That was a long way of saying, I think this is a trade or flip for Liberty as its quality is suspect. Plus note that Zinterhofer joined the GNMCA board just in 2015 and of course he has deep Malone connections not withstanding he is Independent Chairman of the Board at CHTR and is Malone's partner in Lat AM owning a portion of Liberty Puerto Rico that is housed in LILAK.

To me this has all the prints of a flip given the asset was distressed and Malone foresaw the value this asset could have in a scaled operator like CHTR (think programming) but was small enough to fall off the radar. Further, the Vz asset increases in attractiveness to a scaled cable co as they position themselves to negotiate for their spot in a wireless/wireline converged world (e.g. quad play).

Sorry for length but this is a high conviction holding so naturally have strong opinions.