I’ve got a few other companies I wanted to write about, but given their shareholder webcast is early next week, my last post was on LVNTA (which I am very long), a tweet on them drew a nice response, and I am trying to convince Greg Maffei to let me race the Freeze at the next shareholder meeting, I thought now was as good a time as any to talk about Liberty Braves (BATRA/BATRK; disclosure: long).
The entire Liberty complex is notoriously complex, but one of the nice things about Liberty is they’ll often just hand you a slide that shows you how to value a piece of the company (and it's just on you to verify and update). Sure enough, at their November investor day, Liberty presented the slide below. 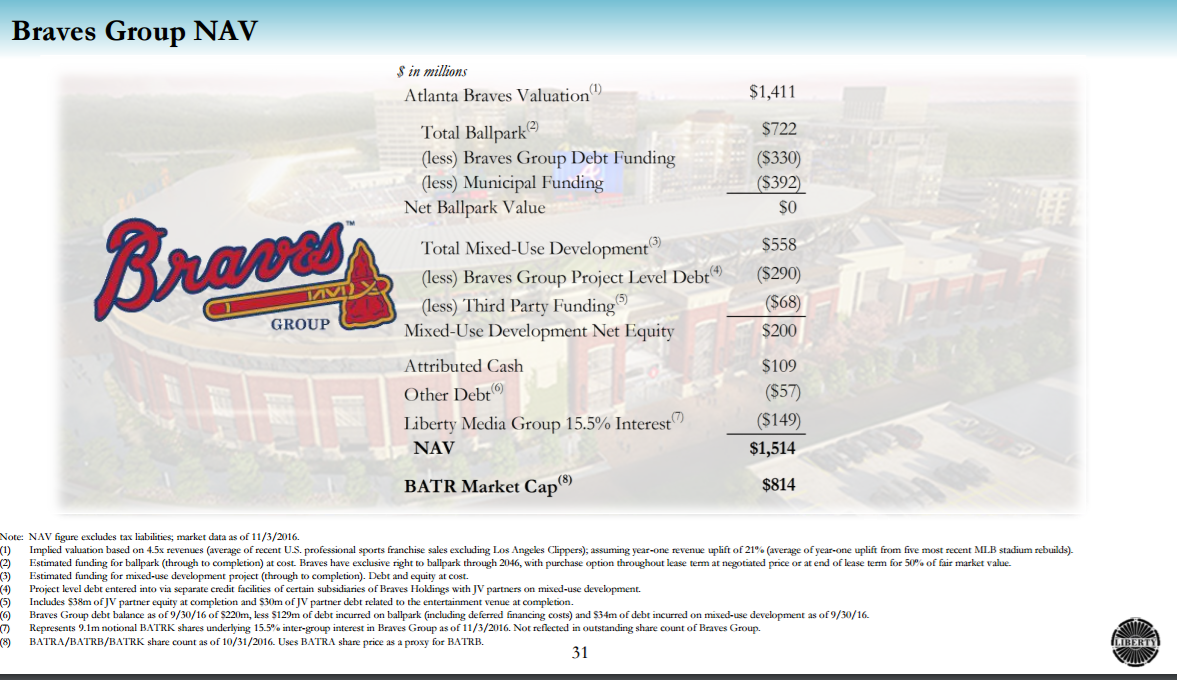 Unfortunately for investors today (and that includes me), BATRA was priced at ~$17/share at the time versus today’s share price of ~$23/share. Fortunately for investors, that table is not exactly difficult to recreate and update with different assumptions. Here’s a Gabelli report that does just that and shows upside to $30.
I’ve spent a lot of time thinking about the Braves SOTP; in fact, I even recorded a podcast last year walking through its different pieces. And there’s one piece in the Braves SOTP that I gave the Braves credit for in the podcast and that Gabelli gives the Braves credit for that I no longer think is correct: the “hidden asset” of the MLB (technically, I only gave credit for MLBAM on the podcast, but it’s the same thinking).
Let’s start with the thesis for the hidden asset: each baseball team owns 1/30th of the MLB. The MLB is valued at $12B; therefore, the Braves have a hidden asset of ~$360m on their balance sheet. In addition, the MLB owns MLBAM (MLB Advanced Media), which has majority control of BAMTech (whose technology powers direct-to-consumer streaming services like MLB.TV (duh), HBO Now, and the WWE network). In late 2016, Disney paid $1B for a 33% stake in BAMTech. Since the MLB own 66% of BAMTech and the Braves own 3% of the MLB, the Braves stake in MLBAM is worth another ~$60m ($3B * 66% * 3%). Put it together and the Braves have a hidden asset through their MLB ownership worth ~$420m (the Gabelli piece estimates it at $450m and gives it a 50% haircut to get to $225m).
So why do I think that “hidden asset” story is off? Every team owns the same stake in the MLB / MLBAM / BAMtech. The MLB owners know that they have this stake, and I highly doubt they’re just giving it away when they sell their teams. In other words, when the Marlins sell to Derek Jeter (or whoever) for $1.2B, that valuation will certainly include the embedded value of BAMTech and MLB.
If you take the MLB hidden asset out and use the rest of the Gabelli numbers, BATRA today is worth ~$26/share. Not a huge upside from today’s share price of $23, so is it really worth buying / looking at?
Obviously, I think the answer is yes (again, I’m long). There are two reasons I believe that. The first and most important reason is that I think every American sports team in the big three sports (basketball, baseball, quidditch) is massively undervalued by analysts and Forbes. The second and less important reason is I think the Braves in particular are undervalued.
Let’s start with my first point: I think every big three sports team (actually, I’d be willing to extend it to the big five and include football and hockey) is undervalued by analysts and Forbes right now. Public analysts generally value sports teams like this: take whatever Forbes has valued the team in their most recent rankings and add a 30% premium to get to private market value. To justify that 30% number, they take the past sales prices and average them out. Here’s a really helpful slide from the most recent Braves presentation that shows what a typical analyst does.

Notice anything about that chart? A few things jump out to me
Here’s my theory: in the old days, team owners weren't as rich as they were now (often a team was the vast majority of their net worth), and teams were often a bit of a headache as much lower revenue numbers lead to more contentious labor fights and teams were often money losers. Today, leagues are printing money (leading to a relatively benign labor environment), team owners are often billionaires outside of their team ownership, and teams are, at a minimum, breakeven and often producing a nice profit. The combo means that there are much fewer sports teams in general for sale, and I believe that going forward when teams are up for sale the premiums are going to be startling. I’ll dive more fully into that theory in a second, but let’s address the elephant in the room: isn’t that thesis disproved right off the bat by the small premium for the Mariners?
I don’t think so. Nintendo owned the Mariners, and they made it clear they wanted a quick and non-contentious sale to their minority partners that would allow Nintendo to keep a stake in the team. Nintendo was also something of a forced seller as they “could use the infusion of cash”. A semi-forced seller who openly admits to not wanting a full auction / shop process and wants to sell to their minority owners while maintaining a stake themselves is not exactly an ideal place to find a premium. If a process that poor results in a 19% premium, imagine what a full process could have gotten.
So, Mariners aside, why do I think teams will sell for massive premiums? There is simply no supply of sports teams and the demand is high, driven by a decade long bull market and increasing accumulation of wealth by the top 1%. Again, look at that chart of sales premiums. There was one sale in 2015 (the Hawks, who were sold after an inflammatory email sparked controversy) and one in 2016. Given the Mariners weren’t really shopped widely, there was effectively one team that hit the open market in the past two years, and that was only because their owners’ hands were forced.
If we drop the Mariners and Clippers both from the average (the Mariners because they weren’t really shopped and the Clippers because the valuation was so high), then the average of the four most recent teams sold is ~60%. Most of those teams were sold under pretty desperate circumstances (the Clippers had the infamous Sterling scandal, the Hawks had an email scandal of their own, and the Kings owners had lost a ton of money; see end notes for more), but obviously a ~60% premium would be nice for any Braves shareholder today.
This "larger premium" point is further backed up by what’s happening with the Marlins right now. The Marlins are currently in late stage talks to be sold. Three groups are circling the team with a ~$1.2B valuation. The Marlins were valued by Forbes at $940m, so that 27% premium is no big deal, right?
A deeper dive shows the premium to an “unadjusted” number is actually significantly higher. The Marlins were the 2nd least valuable team (according to Forbes) in 2016 at $675m. Forbes took their valuation way up in 2017 because the Marlins had a handshake deal to sell themselves for $1.6B that fell through because the soon to be owner was named the ambassador to France. The average MLB’s team value increased by 19% in 2017 (a figure slightly raised by the Marlins ~40% jump, but not enough to quibble with), so if we assume the Marlins would’ve increased by a similar amount absent the $1.6B deal, the current $1.2B is a ~50% premium to the Marlins “baseline” value of ~$800m (2016 valuation of $675m increased by 19%).
Ok, so hopefully I’ve hammered my point home by now: the Forbes valuations and “30%” premium analysis lots of analysts like to use massively undervalues sports franchises in general. Now let’s turn to my second point: the Braves themselves are undervalued.
Let’s just start with a simple comparison: Marlins to Braves. There’s no doubt the Braves should be worth significantly more than the Marlins. The most recent Forbes valuation had the Braves valued at $1.5B as the 12th most valuable team in baseball, while the Marlins at $940m were the 25th most valuable. The Braves have the largest radio affiliate group in the MLB (147 local radio stations across the southeast) and a deep history with a national fan base dating back to when they were the only team that was nationally broadcast consistently when they were on TBS. So if the Marlins are having a bidding (during an auction described as “a star-studded group of bidders pushing up the price on a last-place team in a middling market for pro sports”) war in the ~$1.2B range, I would feel pretty comfy the Braves would see plenty of demand in the ~$2B range. (Here’s what management had to say on the Braves versus Marlins debate on the Q4 call “I would posit as a proud owner that the Atlanta Braves, one of the most storied and longest franchises in baseball, frankly in professional sports in the U.S. would be far more valuable than the Marlins, given their fan base, given their opportunity, given the new stadium, given the potential TV revenue ahead, given the breadth of the radio coverage, many, many factors that we would be more valuable than the Marlins, whatever prices they eventually printed if it is.”)
Moving past a simple comparison, I think the Braves in particular are undervalued. Forbes values teams on a revenue multiple, and the Braves’ revenue is depressed from a few angles currently.

I’ll list the risks in bullet form below and wrap the write up itself here with a quick note: there aren’t many opportunities in the public markets to own professional sports teams (I can only think of three), and given the lack of direct comps and the fact most of the value of a sports team comes from capital appreciation and not actual operating income, I think a sports team is exactly the type of asset that can get undervalued in the public markets. The Braves today are at an inflection point: the team will get better, the new stadium will boost revenue, and eventually new TV deals will drive revenue much higher. Today’s share price reflects none of that.

Which makes the final sale whenever it comes potentially bigger than analysts think. Like why Ballmer bought the Clippers for an ungodly sum.