Note: this is part two in a series that started discussing stock dilution and Turning Point Brands (TPB); please see part 1 here.
RLJ started as an SPAC by Robert L Johnson, who founded BET. The results have been a disappointment, but in the past year there were some signs that the company was turning a significant corner.
Today, RLJ has two main assets: two rapidly growing streaming services (AcornTV and Urban Movie Channel (UMC)) and their ownership of 64% of the Agatha Christie Library.
The crown jewel of the company is clearly the Acorn channel. It’s one of the 10 largest streaming channels, and it’s growing like crazy. UMC just launched, but it’s also growing rapidly. 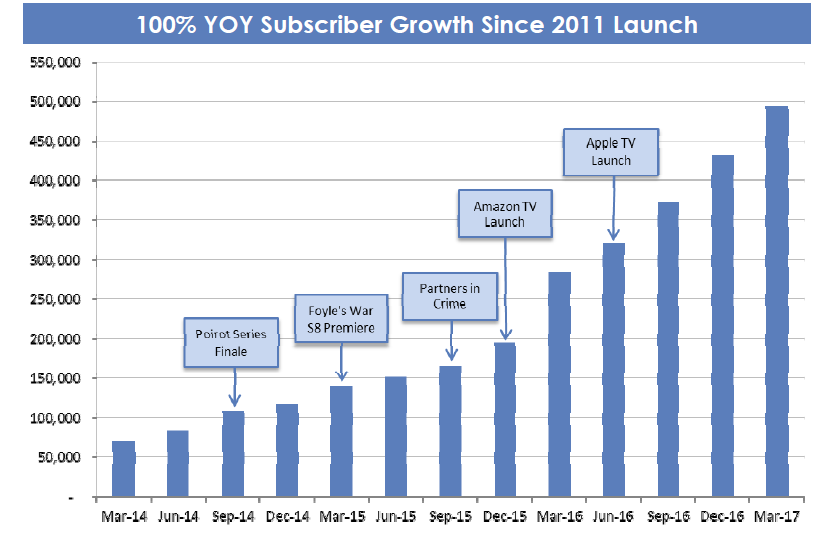 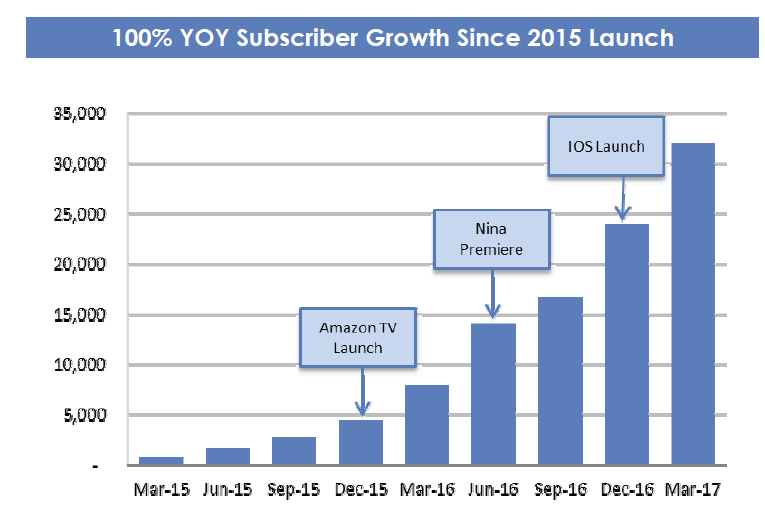 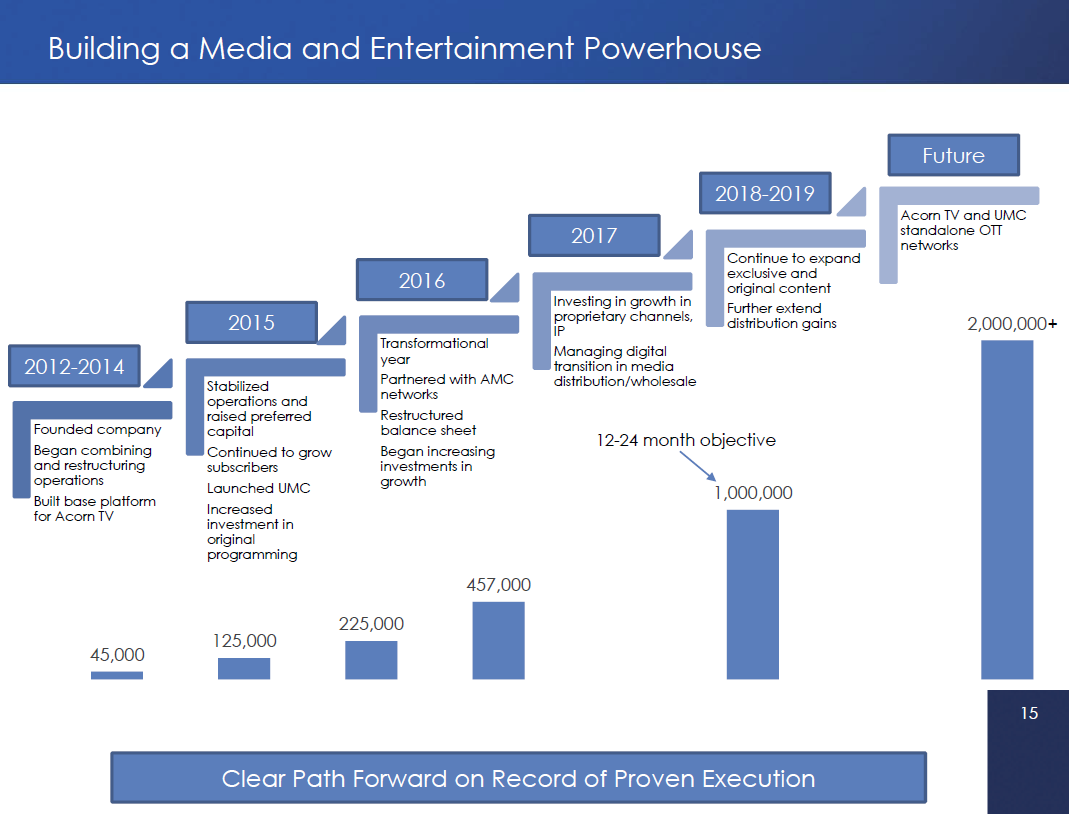 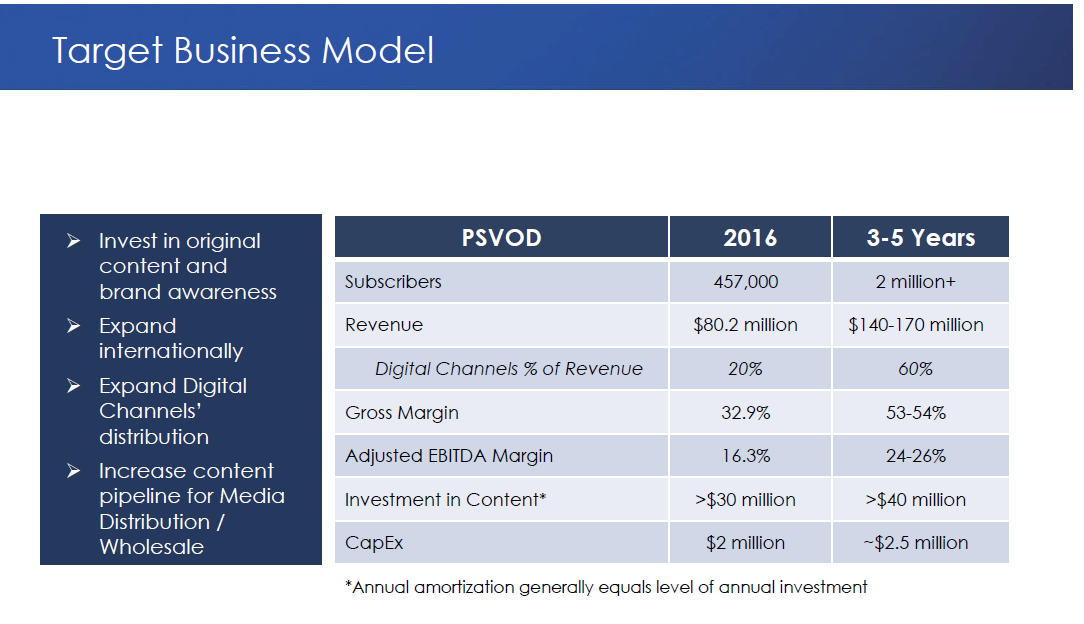 RLJE’s other big asset is their ownership of the Agatha Christie Library (ACL), which controls the rights to Christie’s works and iconic characters like Hercule Poirot and Miss Marple. RLJE’s share of ACL’s earnings came out to $2.2m in 2015 and $3.1m in 2016, and given the earnings are generally royalty based (i.e. earnings basically equals cash flow), this is a high multiple business that likely carries significant value. However, what’s most interesting to me isn’t ACL’s historic earnings; it’s the potential for a very bright future / outlook. Amazon just picked up the right to seven dramas based on ACL’s works, and a Hercule Peirot film (Murder on the Orient Express) is coming out later this year and could generate some hype: it’s got a fantastic cast (Johnny Depp, Daisy Ridley, Judi Dench, Josh Gad, etc.), the trailer looks really good IMO, and analysts expect it to be the #1 film the weekend it launches. Perhaps the movie starts a franchise. I haven’t been able to confirm what RLJ / ACL’s economics in the film are, but between the film and the new Amazon deals I’d expect ACL’s future earnings outlook to look pretty bright.
So the underlying investment thesis certainly seems interesting: a rapidly growing streaming business and a highly profitable licensing business that could be set to see a big pickup in value. It gets even better though: RLJE has a natural acquisition partner. AMC Networks (AMCX) owns 50.1% of them through warrants from a deal they struck last year and would clearly benefit from owning the rest of RLJE. On top of the corporate synergies from cost cutting, AMC has been very clear that they have struggled with a direct to consumer offering, and RLJE’s experience / technology in that area would be valuable to AMC.
So what’s RLJE worth? It’s not an easy story to put together given how disparate the parts are and how quickly they’re moving. My rough stab broke RLJE into three parts (streaming, ACL, and corporate) and then tried to value each individually.
Put it all together and we get $182m in value from the streaming business, $60m from ACL, and negative $70m from corporate overhead for a total value of $182m. If I adjust for all of their warrants (we’ll get to those in a second) and debt, that gets me to a per share value of ~$5.32. Not bad versus today’s price of $4.50, and the upside from there if they can deliver on their 2m subscriber goal would be incredible. Also worth noting the valuation is a standalone: from a strategic acquirers perspective (someone like AMC), RLJE would be worth significantly more given the prospects of cutting their overhead as well as leveraging their technology / consumer distribution.
However, you might remember we started this article discussing share dilution. And my issue with RLJE is there is a lot of dilution in shareholders’ future. As part of their debt deal with AMC, RLJE issued 20m warrants to buy RLJE stock at $3/share (pretty substantial against ~13m basic shares currently outstanding). I can live with that; however, RLJE recently changed the debt they borrowed from AMC so that it pays interest exclusively in RLJE shares priced at $3/share (see below). This means every year RLJE will be issuing ~1.6m shares to AMC, or diluting themselves by ~5% (on top of whatever stock comp they give to management). 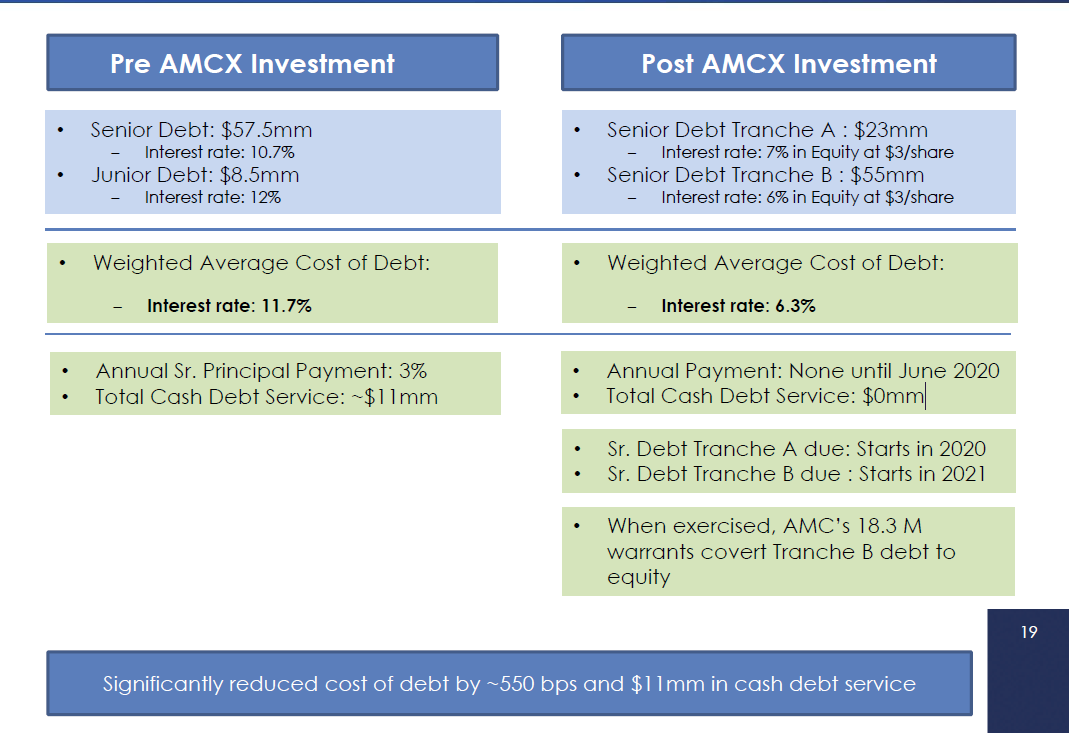 Now, RLJE was pretty clear that they switched their debt to pay all in equity in order to save cash so they could invest it all in content and accelerate their growth, and I certainly can understand that logic. It’s certainly possible that the return on the investment from taking all that cash and growing the streaming services to scale outweighs the dilution, and partnering with AMC (who could both give them cash and eventually acquire them) was by far the best solution for the company.
But it’s also difficult for me to look at a company that would willingly dilute their shareholders at 5%/year for the next several years and give away warrants to purchase half the company at $3/share and think that management is 100% focused on building shareholder value versus building an empire.  Add that concern to the company’s returns since the initial SPAC acquisition was completed and I really wonder if shareholders are ultimately going to be the ones who realize the value creation here. 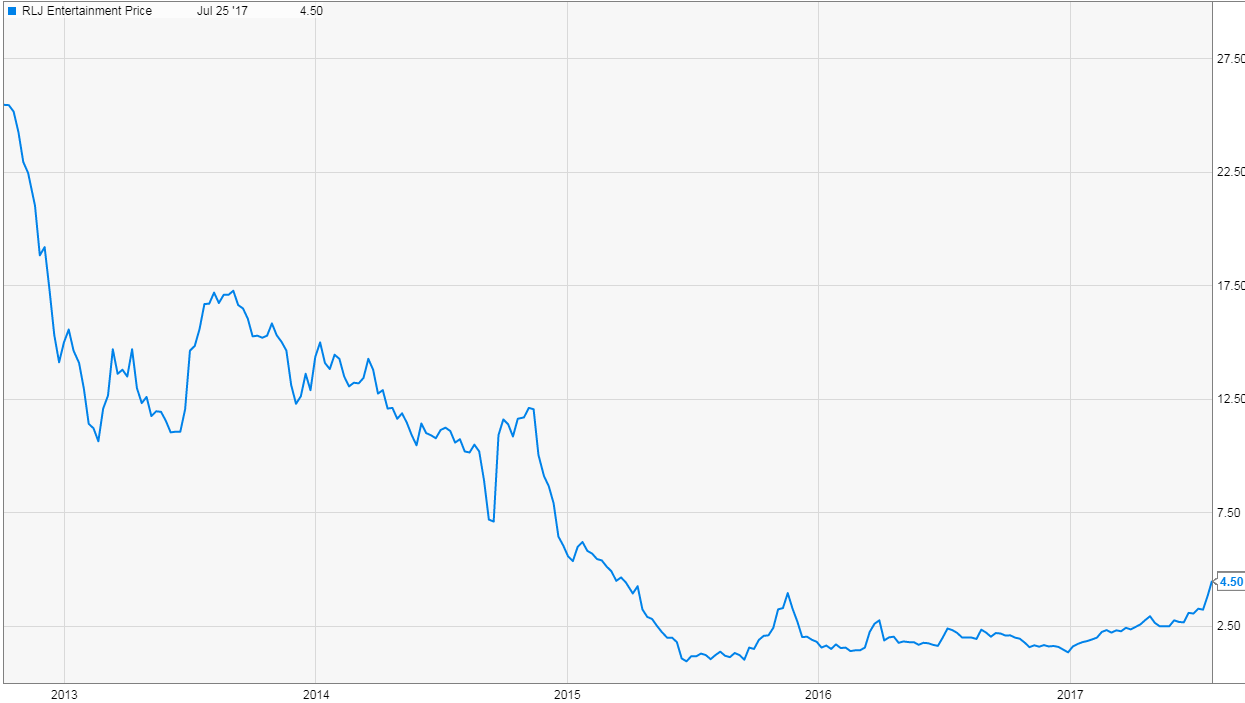 Maybe I’m being too cynical and my hang up on dilution is biting me. Maybe I’m just bitter for having passed on RLJE on that dilution reasoning when they first announced the deal and having watched in horror as the stock ran from $3/share to $4.50 after passing. Or maybe my concerns are justified and RLJE is simply taking very expensive capital to pursue a high risk / high reward strategy of investing a lot into content with the goals of hitting scale before tapping out without a regard for the risk/reward for diluting shareholders like that.
So I don’t know. Really, the only thing I do know is I’m excited to go see Murder on the Orient Express now.

Back down to ~$3 after quarterly earnings announcement

What does MSD mean?

No great answer. I normally use a MSD number, but tough to settle on anythig.

Great article, as always. I have a question.

How do you settle on a multiple to put on SG&A expenses to then subtract from total value? It's something I ponder, and I'm interested in your thoughts on the topic.