Is $RSO too discounted?

Note: I wrote this over the weekend and meant to post before earnings came out, but I got distracted by the tragedy that is AMC. RSO reported earnings last night and filed an 8-K with a bit more info on their LCC sale on Tuesday, so some of the numbers here are slightly stale, but directionally everything is completely consistent so I’m fine posting it now (though I haven't listened to the earnings call yet). Enjoy!
Between questions on share dilution, Franklin Covey’s growth prospects, and AMC’s awful earnings, the blog has been a pretty dark / dim place for the last week. With America basking in the glow of being great again, a dim and dark blog simply won’t cut it, so I thought I’d try to get back on track with an idea I like: Resource Capital (RSO; disclosure: long).
RSO is an externally managed REIT focused on originating commercial real estate (CRE) loans. The basic thesis here is pretty simple: RSO’s NAV at the end of March was $14.16 versus today’s share price of ~$10.20, and I’m betting that 1) NAV is solid / understated and 2) the discount will close over time.
Let’s start with a quick background, because it’s helpful in understanding why the opportunity exists.
Resource Capital launched in early 2006 as an externally managed REIT with a focus on real estate assets. The fun thing about externally managed REITs (and externally managed companies in general) is that it’s pretty easy for the external manager to make money. In fact, bad externally managed REITs have a pretty simple game plan for maximizing the manager’s earnings in good times and bad, and RSO ran that game plan to near perfection. The game plan looks something like this:
There’s one more important part of the playbook: never write anything down until you’re basically forced to (generally because the company has defaulted / filed for bankruptcy). External managers charge a fee based on % of equity, and when something is written down equity (and thus fees) comes down. So just mark everything at the highest price feasible until someone or something literally forces you to cut the valuation.
Anyway, RSO followed that playbook to perfection. From 2011-2013, the company paid out $240m in dividends while issuing $210m in stock. In 2015, the company paid out $2.34/share in dividends despite only taking in $2.08 in Adjusted Funds from Operations (AFFO). The end result was RSO’s external manager collected tens of millions in fees while RSOs shareholders saw basically no return on their investment over a long period of time. And remember- dividends are taxable, so the whole process of raising equity to fund dividends ends up being even more inefficient than it seems on the surface. 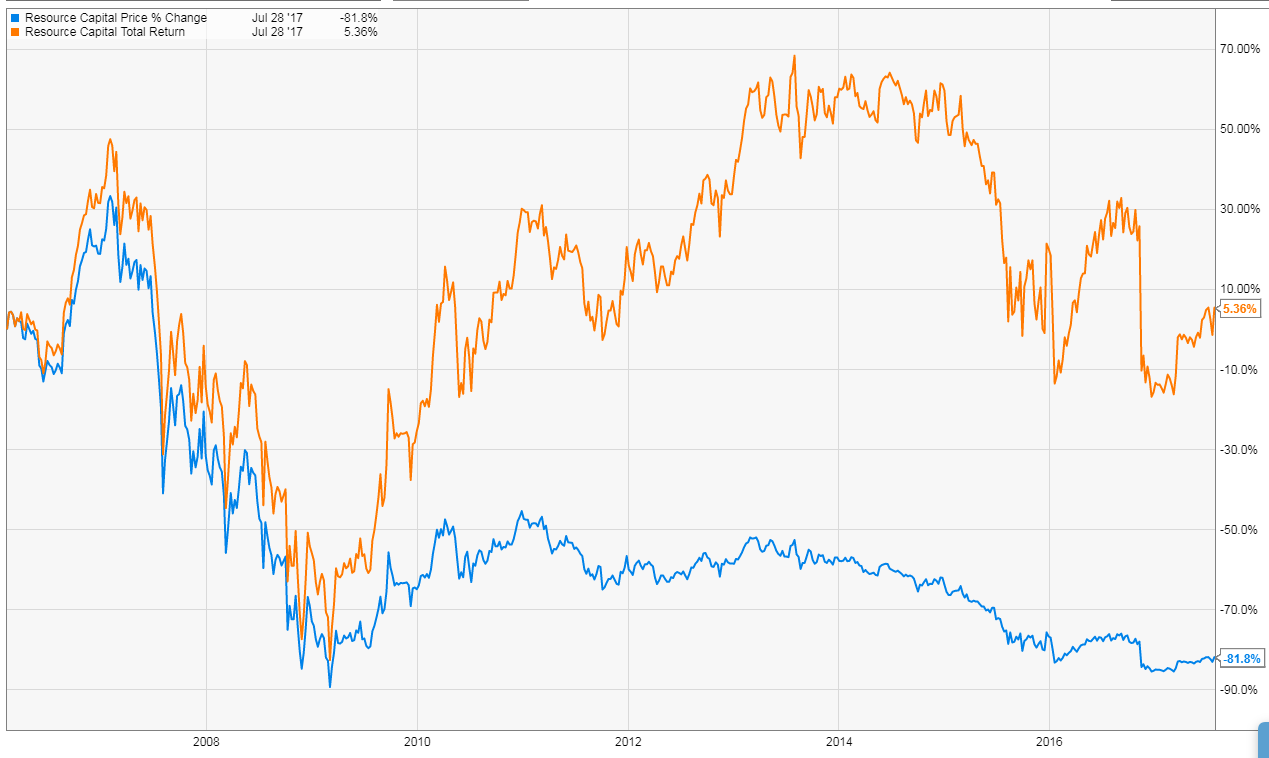 Anyway, things changed in 2016, when RSO’s external manager was acquired by C-III Capital Partners. After taking over, C-III almost immediately approved a new strategic plan that refocused the company on making commercial real estate debt investments, cut the dividend to a sustainable level, and wrote off a bunch of legacy investments.  The stock price did not respond well to the moves, dropping from mid-$12s before the announcement to the low $8s. 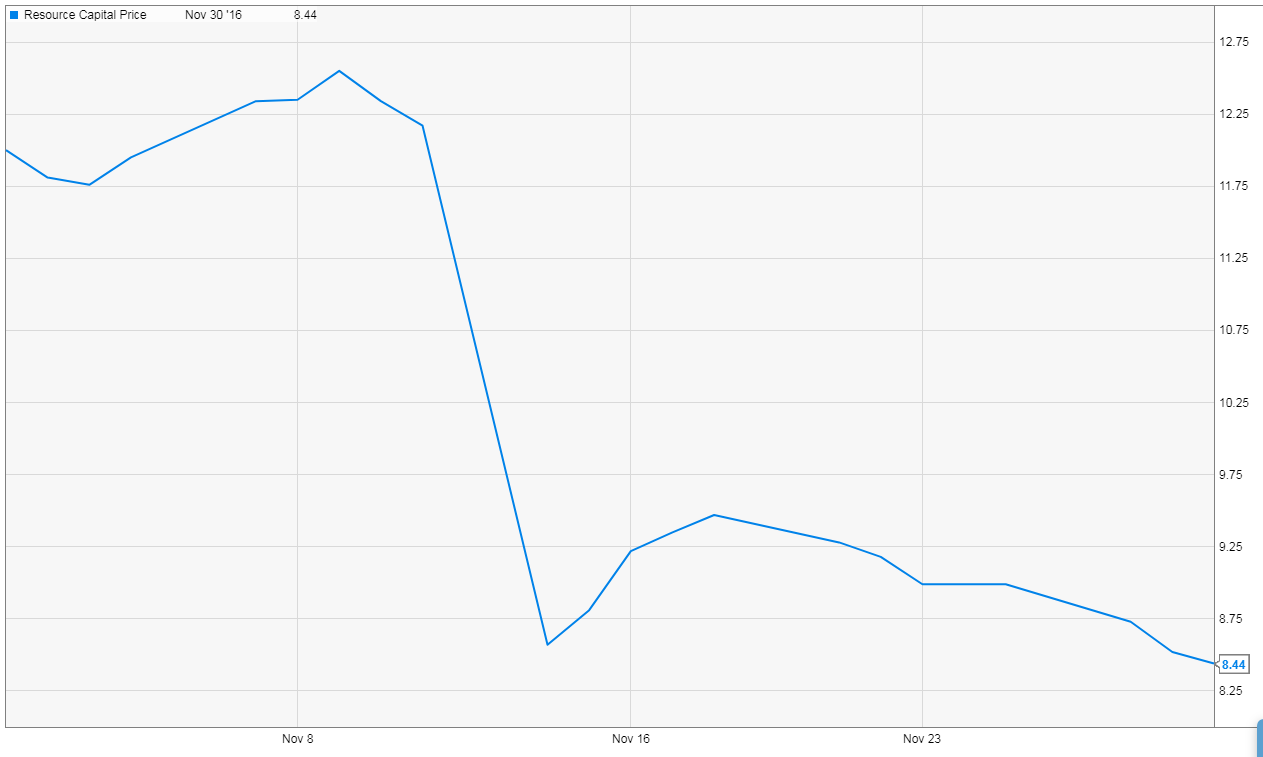 Ok, that basically brings us to today. Management has been doing exactly what they said they would since establishing the new strategic plan in November: slowly disposing of legacy investments, reinvesting the proceeds into commercial real estate loans, and paying out a small dividend ($0.05/share/quarter) until the reinvestments have been fully ramped up into earnings.
So, at today’s price of ~$10.20, I find RSO pretty attractive. Let me quickly go through my bullet points of what I like about RSO
The other thing I find interesting about RSO is their new manager, C-III, because there’s a chance these guys are good enough investors that this deserves to trade around NAV. C-III is controlled by Island Capital, and the whole group is run by billionaire Andrew Farkas (who is now Chairman of RSO). Farkas has made a fortune investing in real estate, and the thesis here is he’s good enough that this deserves to trade up to NAV.
Now, I see a lot of investment thesis that center around “hey, a billionaire is buying this, so it must be good” and quite honestly one of the most frustrating things I see people say / write. If Buffett’s buying something, do I care? Sure! If some guy who got rich as a levered oil driller is buying a tech company, do I care? Not so much. Also, getting rich in real estate is often more a function of taking on a ton of risk (through leverage) and having a rising economy / good cycle make you look good, not a function of true alpha generation / intelligence, so even though Farkas made a fortune in real estate it’s worth wondering if that means he’s worth paying huge fees for (which RSO effectively does through the management contract, and it’s worth remembering he almost went bust when he was starting).That warning aside, it does seem Farkas is a pretty good guy to bet on. To start, Farkas made his money in commercial real estate, and RSO is involved in commercial real estate lending, so there’s an expertise match between RSO / C-III / Farkas at the most basic level. The WSJ also notes that he’s “built several empires in brokerage and real-estate services over the years,” which lends some confidence that he’s a consistent money maker, not just someone who got lucky once, and in general the press around him just seems to suggest he’s the type of guy who knows how to make money.
Bottom line: I think RSO is too cheap at this wide a discount. Comps with worse management contracts / asset quality / managers trade tighter to book than RSO, and I think there’s an interesting case to be made that RSO’s manager is materially better than your average external manager / a group worth betting on.
Risks

Refinancing happening, though market doesn't seem happy about it based on the reaction today. Pricing unknown currently.