My last post on New York REIT (NYRT; disclosure: long / bagholder) was quickly followed by two announcements the company had sold 3 buildings in total (1440 Broadway and 229 W 36th / 256 W 38th). I’ve gotten a ton of questions on the sales, so I figured I’d post something quickly discussing the sales.
This is just my take, but the sale prices are pretty disappointing. While 229 W / 256 W sold for about what I was estimating, I had estimated 1440 Broadway was worth ~$550m, which I thought was pretty conservative given the company bought the building for $529m in October 2013. To sell 1440 for below the purchase price is obviously pretty disappointing. Given the levered nature of NYRT’s assets (all of their buildings have some form of mortgage attached to them), the $30m difference between my sales price estimate and the realized price results in a ~$0.18/share drop in NAV. Not the end of the world, but a meaningful swing for a low $7 stock.
Despite the disappointing sales price, I still think shares look pretty interesting here. NYRT didn’t disclose the fees associated with closing on 1440 Broadway, but we know they paid ~4% of the total sales price in fees for the last four buildings they’ve sold. Assuming that they had to pay 5% of sales price on 1440 Braodway, they’d net $189m from the sale of 1440 Broadway in addition to the $59m from the 229 W / 256 W sales. Add that to the ~$550m from buildings they’d sold between June 30th and today (from the WWP deal, selling 50 Varick, and selling 245 W), and NYRT has received just under $800m in cash from selling buildings since their last 10-Q.
In my last post, I provided a table that estimated NAV at $8.39/share. Below I’ve updated that table for the most recent property sales. In addition, I’ve slightly changed the liquidation costs (I had previously unscientifically estimated $75m of liquidation costs; I now somewhat unscientifically estimate $58m of liquidation costs. I come to that $58m by assuming the company pays 5% of sales price for each of their remaining non-WW buildings and an additional $30m of costs to cover liquidation costs and WW fees). 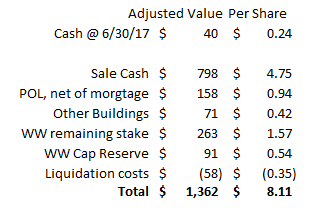 So I end up with an NAV estimate for NYRT of $8.11/share, which remains well above today’s share price. What really interests me about NYRT is that most recent sales should serve to seriously de-risk the stock from today’s share price / significantly improve IRR. I estimate that NYRT now has almost $5/share in cash on their balance sheet, and the cash they have committed to WW’s capital reserve and the valuation of their WW JV cover another $2.11/share, so today’s share price is assigning almost no value to NYRT’s remaining properties. I think that’s a mistake.
Where do we go from here? NYRT should file their 10-Q and provide an updated NAV number within the next week or so. That filing will make this post dated / obsolete pretty quickly (hopefully it doesn’t make the post look foolish as well!). Along with that filing I’d expect them to declare a significant dividend that returns the bulk of the cash on their balance sheet before year end.
Below I’ve updated my IRR for NYRT from today’s levels. It assumes all of the cash from sales to date are paid out by year end, the remaining buildings are sold and paid out by the middle of next year, and WW increases value at 11%/year and is sold in late 2020. This results in a pretty attractive IRR from today’s prices. We’ll know if it’s close to accurate once the 10-Q is filed. Hopefully all works out well, but either way the story is most likely played out so this is most likely my last discussion on NYRT. Good riddance!

The WW property doesn't increase by 11% per year. Management is assuming that it increases in value by 2 to 6% per year (from 1.725 to 1.9-2.2B) based on investments to improve the property. After adding NOI and accounting for leverage and a 2-4 year hold period you can get a high single digit to low double digit return on the WW stub. Anything more than that IMHO is only a dream.

Occupied space would be capitalized with a different cap rate than vacant space.

Why would WW increase in value by 11% per year? Given the softness of the market, one would expect flat prices or even declines

So more than likely $7.93 will fall further? Given the history of these sales?

In your WWP 11% IRR are you including the annual cash flow in dividends we will get?

Agree w/ your analysis. Curious why you didn't try and back into the value of the POL properties given we have another data point. I think it's largely consistent with what you had estimated but had to tell since the sale was one POL building and one outside of it.