But, as my Christmas present to you, this week I’m going to present (pun intended) four of my favorite special situations in a bit of a shallower manner; instead of a full deep dive, I’ll just provide a situation overview with a little background and some risks. Why chose these four situations as a Christmas present? My reasoning is that there is a decent chance that many or all of them will “not be with us” (i.e. will have played out) by this time next year, so if I don’t “gift” them to you this Christmas I’ll never have the chance to! I’m also going to post the ideas in a bit of an order: the first post will be the most liquid, the least quirky, and the least likely to play out in the next year, while the last post will be the least liquid, the most quirky, and the most likely to play out next year. (Update: Idea #2, HRG, and Idea #3, YUME, are now posted)

Without further ado, here’s my first idea for the new year: Dell’s VMW tracking stock (DVMT; disclosure: long DVMT and short a tiny amount of VMW against it).
Look, I told you we were going to start with the least original idea, and we definitely did as this tracker is a pretty common discussion point in most value / event circles and has been mentioned in Barron’s twice.
So why do I like it now?
To understand that, we first need to talk about the tracker’s history. DVMT was issued as part of the Dell / EMC merger. You can find a big overview / FAQ  of the tracker here, but the basics are that on issuance DVMT tracking stock had a represented 53% ownership of VMWare (VMW) and each DVMT share had a one to one relationship to VMW stock.
At the time the DVMT shares were issued, there were two major risks to the tracker.
The first was that DVMT shares have significant credit risk to Dell. When the trackers were issued, Dell had just taken on a huge amount of debt in the mammoth EMC acquisition. If Dell ran into serious trouble with the integration, then DVMT shareholders were going find themselves in bankruptcy court trying desperately to recover something. There was even an unlikely scenario (simply because VMW is such a big part of Dell) where VMW was doing amazing while Dell overall struggled so that VMW stock raced while DVMT went to zero as Dell approached bankruptcy and DVMT investors “playing the spread” (shorting VMW to go long DVMT) got hammered.
The second big risk is what I call “Dell screws you risk” (that is the technical and very professional term). DVMT has some very particular provisions relating to the tracking stock (see p. 38 of the proxy) that would let Dell screw over DVMT shareholders. The range of “screwing” could run the gamut of things: a fairly benign one would be Dell selling VMW to a third party in a cash bid, in which case I believe DVMT would get the after tax proceeds of a sale (I doubt this is happening; VMW is a key piece of the EMC / Dell merger). A still pretty benign scenario that would be a disaster for the DVMT minority would have Dell bidding for the rest of VMW while leaving the DVMT tracker outstanding, which would leave investors with a pretty strange tracker that reflects a majority economic interest in a controlled company. This scenario is laid out pretty clearly in Dell’s 10-K:

Moving to the advanced section of the “screwing shareholder Karma Sutra” would include Dell deciding to swap assets into the DVMT tracker in exchange for VMW shares and constantly doing so at 95 cents on the dollar (I call this “death by a thousand cuts”) or force converting DVMT into Dell shares after Dell IPOs (this could be good for DVMT shareholders as they have to do it at a premium to DVMT’s price, but it’s murky). Note that this is not an extensive list and I’ve somewhat simplified the situations, but this is a pretty good overview of the major fears IMO.
Ok, so we’ve covered the two biggest risks to DVMT (credit risk and screwing risk). Which brings me to the reason I think now is a great time to be long DVMT: both of these risks have fallen to a significant degree since the merger closed, yet the spread between VMW and DVMT has actually widened to near record levels recently! The chart below shows the spread between DVMT’s price and VMW’s price over time; we’re now at the widest levels since immediately after the tracker was released. 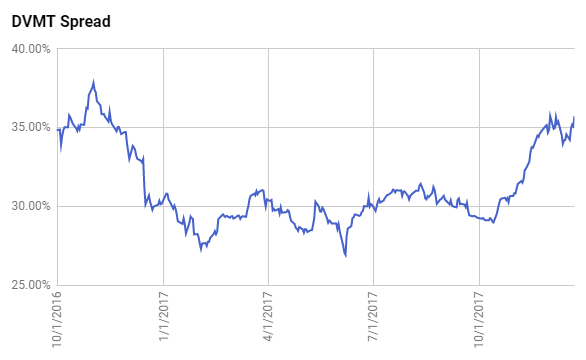 What makes me think both risks have dropped?
On the credit side, Dell’s credit has improved significantly since announcing / closing the EMC deal.

With the merger closed, the integration mainly on track, and the company using most of its cash flow to repay debt, the risk of Dell going bust and DVMT shareholders trying desperately to recover something in court has shrunk significantly. 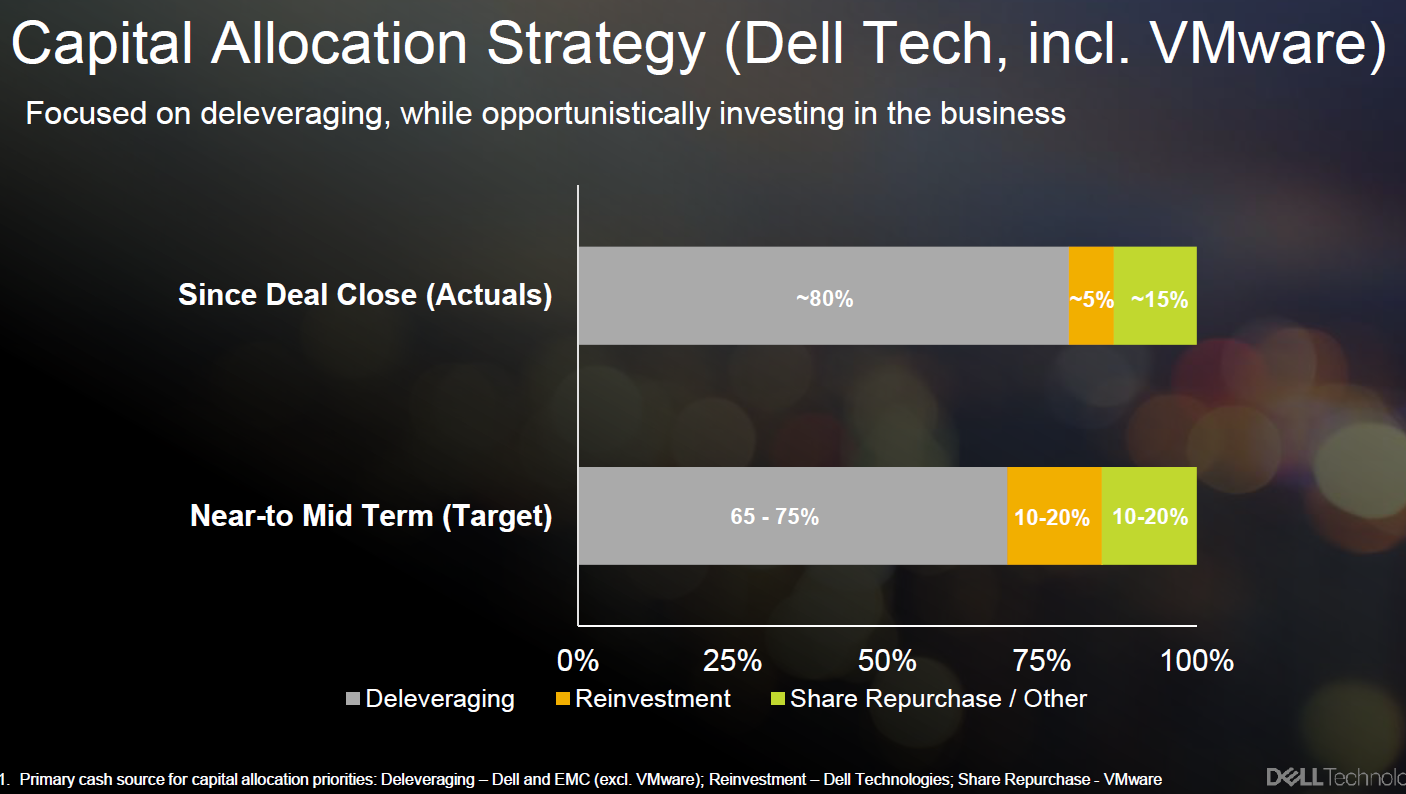 But the real progress has been made on the “Dell screwing you” side, as I think Dell’s actions since issuing the tracker strongly indicate that they don’t plan on screwing you. The key point here is Dell has been repurchasing DVMT stock like crazy. Their Q3’17 earnings release notes that they’ve repurchased 23.4m shares since closing the EMC transaction; given they only issued ~223m shares when the deal went through, that means the company has repurchased more than 10% of the tracker in just over a year since the deal closed. If Dell planned on screwing the DVMT shareholders and giving them a zero (or some other type of huge haircut), would they bother repurchasing the tracker? I don’t think so: today’s discount would look downright expensive to how wide the shares would trade if Dell looked like they were going to screw DVMT shareholders, and Dell could wait and pounce once desperate shareholders were selling these at a mammoth discount if they really wanted to screw minority shareholders. Since Dell seems to have a big appetite for shares at these levels, my belief is they’re not going to screw shareholders. Dell also included a slide on taking advantage of the DVMT discount to repurchase shares in their investor day deck; again, anything could happen, but the company seems focused on taking advantage of the discount, not figuring out ways to siphon money away from DVMT minority shareholders. 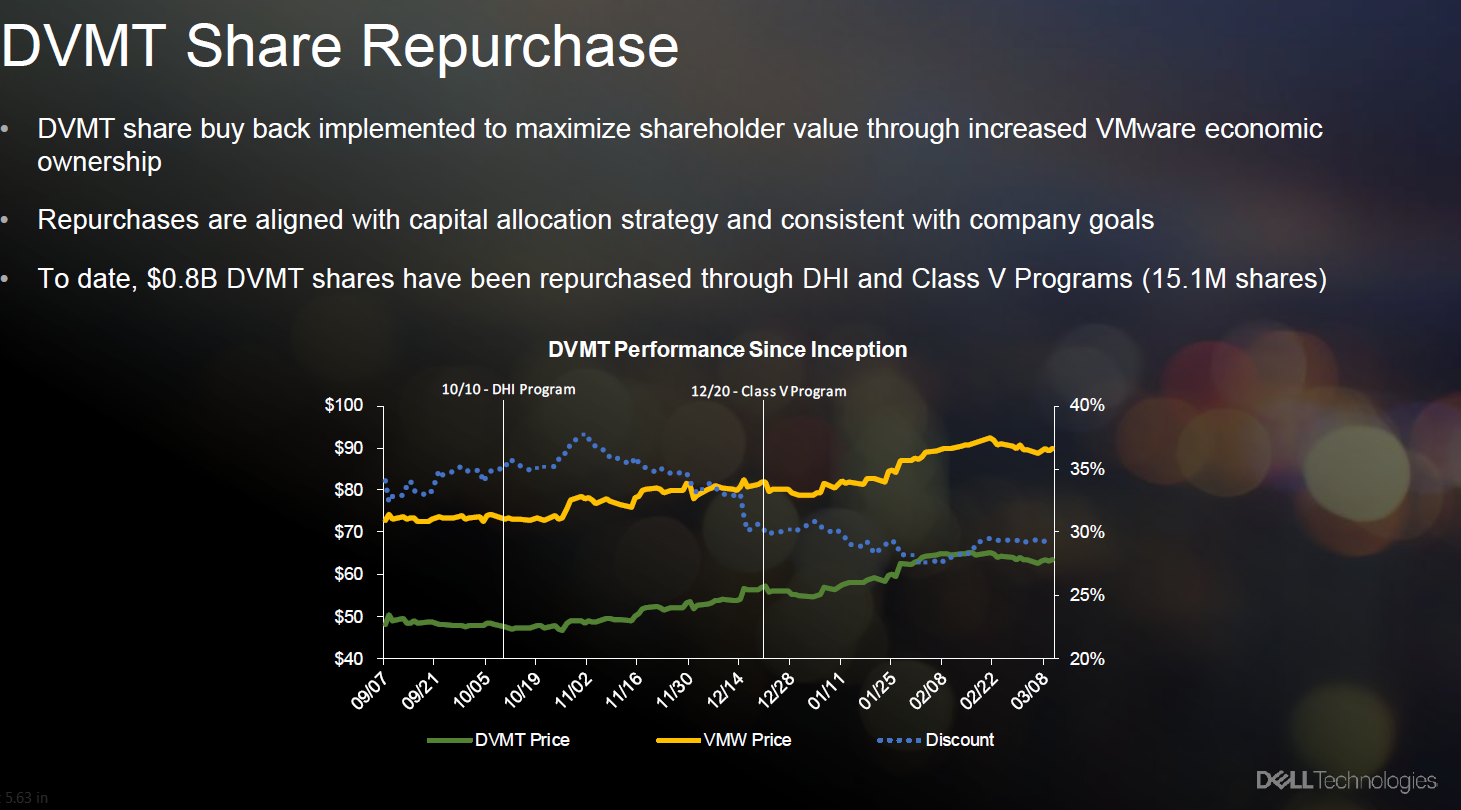 The DVMT repurchases have one other effect on DVMT: because DVMT is repurchasing shares at such a big discount, each repurchase has the effect of increasing the ratio of VMW shares represented by DVMT. At November 3, there were 199m shares of DVMT outstanding, and these shares represent a 61% interest in Dell’s 331m shares of VMW (see p. 54). So each DVMT share now represents (331 * 61% / 199) = ~1.015 shares of VMW. Most people just compare DVMT’s price to a single share of VMW, but that extra share ownership actually adds another ~$2/share in VMW stock to DVMT’s NAV. Note that the DVMT spread chart I showed above handled the spread the way “most people” do it and just compared the DVMT price to VMW at a 1:1 ratio; factor in the accretion from the share repurchases, and the DVMT spread is even wider.
On the VMW side, I can’t claim to be a VMW expert, but Dell is clearly bullish on VMW’s long term future. Dell’s capital allocation is clearly directed towards increasing their exposure to VMW (VMW itself is repurchasing shares, and by buying DVMT tracker shares Dell increases their ownership of the DVMT group as well (which consists purely of VMW stock and thus increases Dell’s VMW ownership). Take that for what it’s worth, but it’s generally been a bad idea to bet against Dell / Silverlake. If they’re bullish enough on VMW that they seem to be increasing their exposure to VMW on every side of their capital allocation, I wouldn’t want to bet against them.
So how does this play out? I think DVMT continues to repurchase shares throughout 2018, which drives continual NAV accretion. Given how quickly Dell is acquiring DVMT shares, this accretion will prove meaningful. I would guess that continued repurchases would, at some point, cause the NAV gap to shrink a bit. I would also guess Dell wants to IPO again at some point, and having the DVMT shares out makes for a bit more complex story in an IPO. Given the increased complexity and that the DVMT minority shares are of increasingly little importance to the overall Dell story as the share repurchases + Dell’s growth minimize their overall economic contributions (plus I believe DVMT’s shares have certain rights in an IPO that would incentivize Dell to take them out before an IPO happens), there’s a decent chance Dell attempts to take the DVMT minority shares out at some point in the future (and before an IPO). Will that be in 2018? Maybe, but I’m guessing that’s more of a 2019 story. Looking further down the road, Dell could spin out the VMW shares to DVMT shareholders tax free in 2021, which would collapse the discount completely.  I’m not sure if they’d want to do that, as it would take them below the 80% ownership level of VMW that lets them consolidate for tax purposes (note that 80% level is currently really critical: selling DVMT’s VMW shares to VMW is a tax free transaction as long as Dell owns >80%; if DVMT sold VMW shares on the open market or something there’d be a huge tax bill), but it’s possible they decide to spin out the VMW shares just to simplify the structure. Plus, given their current DVMT share repurchase levels they actually might be able to do a spin and still own more than 80% of the company by the time 2021 rolls around!
So, overall, I’m not sure exactly how or when the DVMT story will play out. But at this level of discount and with the continued accretive share repurchases, I’m happy to wait for a happy conclusion.