In yesterday’s post, I left a bit of a cliffhanger in the section on deal close. I mentioned that you needed to believe RTHM’s shares would completely tank on deal close in order to justify the massive arb spread.

My bottom line is I don’t think RTHM shares will tank on deal close. In fact, I think it’s likely the combined company is somewhere between undervalued and substantially undervalued, and I wouldn’t be surprised to see the combined companies’ share price appreciate significantly once the deal closes.
To understand why, let’s turn our sights to RhythmOne. RhythymOne has a long and uninspiring history; the company was spun out of Autonomy in 2007 as Blinkx. You may remember Autonomy as the company that was acquired by HP and later turned out to have… overstated their books, and (unsurprisingly) Blinkx had some issues too. Eventually the company rebranded as RhythmOne. Today, the company is an ad tech company that’s focused on becoming a full service programmatic advertising company (basically, the company matches demand (brands that want to advertise) with supply (publishers that have audiences / readers) automatically instead of through RFPs). This is not an easy business; major companies like Yahoo and Google (among others) compete here, and benefits to scale are real (auctions are run in real time so scale means better pricing, more scale drives better data and better advertising / targeting, and a lot of the back end costs are pretty fixed). RhythmOne is trying to get that scale by rolling up the smaller players in the industry: YUME will be their third acquisition in ~a year, following Perk and RadiumOne, and ComScore says their platform is now #4 in reach.] 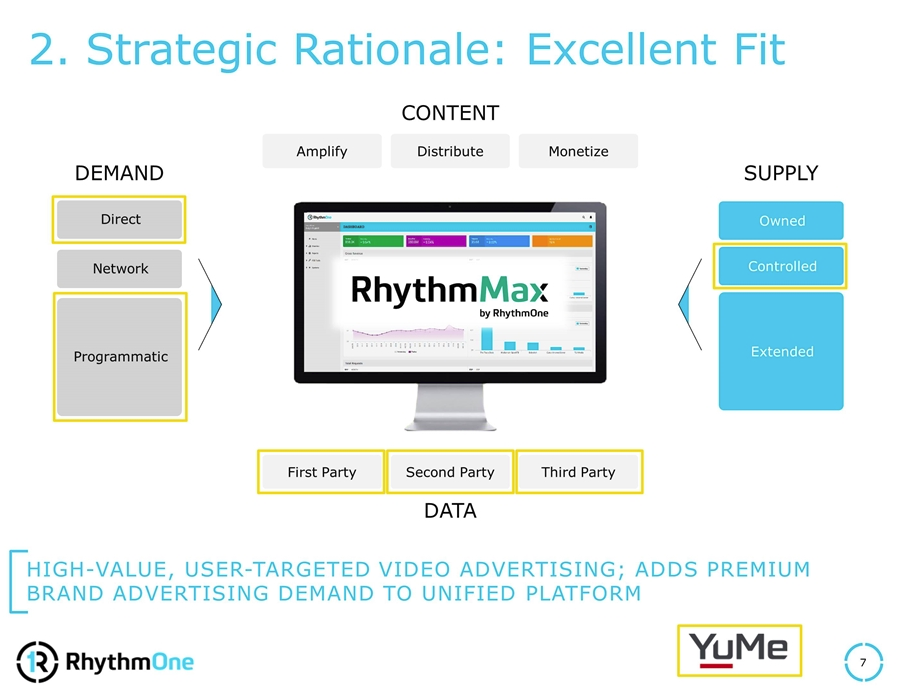 (From the company’s combined company’s merger deck)
Here’s why I think the combined company’s stock is interesting: RTHM is forecasting significant synergies from acquiring YUME, and assuming they deliver on those synergies / their margin targets the combined company looks really cheap. RTHM is forecasting $10-12m in annual cost synergies plus potential revenue synergies from buying YUME. That’s a mammoth amount of synergies- as mentioned yesterday, YUME’s current EV is ~$90m and their current LTM EBITDA is $20-25m. RTHM is basically saying the cost synergies alone basically pay for the deal, and RTHM is getting any potential revenue synergies as well as YUME’s current standalone earnings for free. That’s incredible!
So that’s why I think the combined company is interesting. That reasoning also blends into why I think this opportunity exists. Remember, RhythmOne is a roll up, and their big acquisitions were completed in 2017. RhythmOne only reports semi-annually, and their last report was for the half year period ending September 2017, which is their least important half as most of their earnings come around the Christmas season. Why do I mention all of this? Because it means that RhythmOne has yet to report a clean year for the rolled up company. In other words, their historical financials are basically meaningless because they don’t include a full year (or in some cases, any) revenue and earnings from their Perk or RadiumOne acquisitions, to say nothing of the potential synergies from those deals or the Yume deal.
Let me pause here and summarize the situation. RhythmOne is engaging in (hopefully) extremely accretive rollups, and given the scale and pace of these roll ups their historical financials are basically meaningless. The other interesting thing is RhythmOne hasn’t exactly made is easy to put together a historical income statement (until the form F-4 was filed, I haven’t seen any pro forma for the combined company, either with or without YUME). Make no mistake: roll ups are dangerous, and the black box-ness of RhythmOne’s financials certainly increases the risk here. But the whole situation screams to me “potential for a huge mispricing”.
Which brings us to YUME’s F-4 filing. If you scroll all the way to p. ~205, Yume provides a PF balance sheet and income statement for not just YUME but the combined, RhythmOne (i.e. RhythmOne plus all the acquisition plus YUME). I’ve screenshotted the PF income statement below. 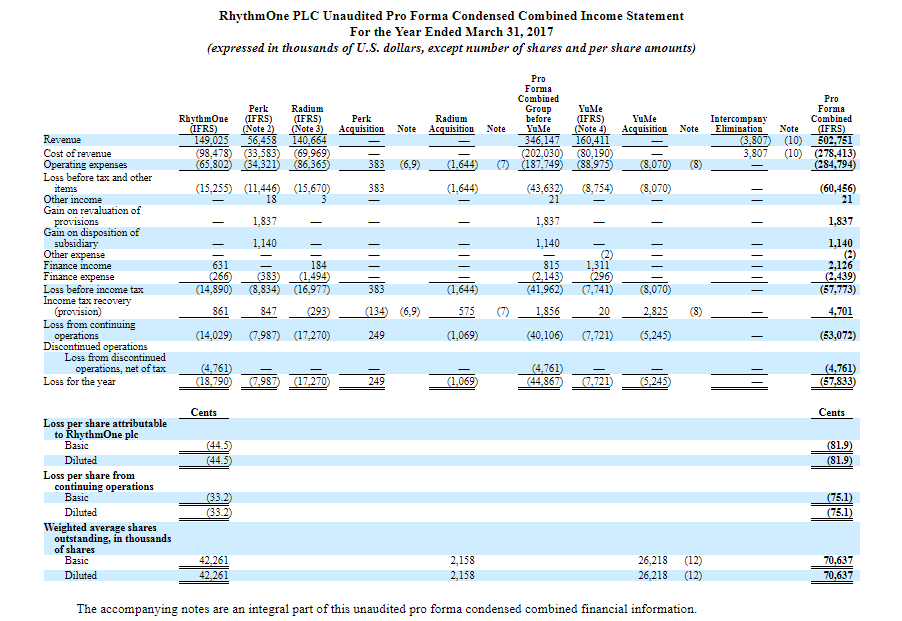 The income statement remains something of a complete mess. EBIT comes in at negative $60m, a laughably high figure that would run the company into the ground if it continued at that pace for any period of time. That number is near meaningless: remember, the synergies from combining these companies should be quite high and a historical number doesn’t capture those synergies, but the historical number does capture one-time costs like merger expenses and non-cash costs like amortization.
So instead of focusing on what a mess of an income statement they have, I want to focus on one number: the revenue number. The combined company did ~$503m in revenue in FY17. On their fiscal 2017 earnings call, RTHM management said they were targeting a “double digit” EBITDA margin. That numbers makes sense to me: it’s broadly in line with both peers and  also in line with what YUME is doing as a standalone company right now / projecting in their forecasts.
So let’s assume RTHM can do 10% EBITDA margins. That would give them ~$50m in annual EBITDA. YUME spends ~4% of sales on capex; if we assume RTHM does something similar (I’d guess they could be a tad lower just given scale benefits), the company would spit off ~$30m in annual unlevered cash flow.
If we scroll down to p. 207 of the F-4, we can see a PF RTHM balance sheet. The combined company will have ~$35m in debt and ~$49m in cash / marketables. And p. 209 shows the combined company will have ~78m shares outstanding. Put it all together and we can come up with a pretty simple cap structure. I’ve included all of that info in a simple and hastily throw together image below. 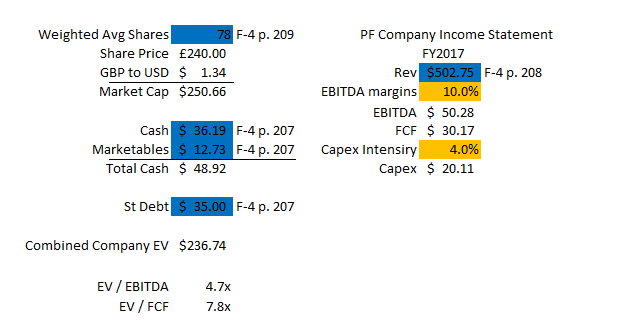 So, if we believe those margin and cash flow numbers (and that is certainly a big if!), the combined RTHM is currently trading for <5x EBITDA and less that 8x unlevered FCF. Obviously I made quite a few assumptions to get to those earnings numbers, but I think all the assumptions were pretty rational and can be backed up. Just as a quick check, YUME  was projecting $23m in EBITDA for FY17 and RTHM thinks they can get $10m of cost synergies minimum from buying YUME. In other words, YUME alone is worth $33m of EBITDA, or ~67% of the projected EBITDA total, despite accounting for <33% of revenue.
What valuation for RTHM would make sense? I’m not 100% sure, but I am pretty positive the current PF valuation is much too low. Interestingly, a share price of £375 (RTHM’s share price at the time of announcing the YUME deal) would result in a ~$375m EV valuation, or ~7.5x EBITDA / 12.5x unlevered FCF, which seems much more reasonable than the current price. Investors can differ on the proper valuation (maybe RTHM is only worth ~6x EBITDA / 10x cash flow, which puts RTHM share price at ~£300), but the bottom line to me is that the current share price looks much too cheap. If / when RTHM merges with YUME and begins reporting consolidated results, I would guess shares will start to move higher as the market starts to understand the PF earnings power of the combined company.

While I get this thesis, and frankly am a fan of ideas that dive right into prima facie murky situations, I struggle to see the downside protection (quickly realizable value, as it were) that would hedge one in / keep one from pulling the sell trigger if/as markets get increasingly nervous about the PF entity.

You never mentioned if any of YUME/RhythmOne's peers trade on an above-the-line basis, e.g. EV/Sales of EV/Gross Profit. At $240M EV, that's 0.5x sales and about 1x gross profit. Do those jump out at you as unreasonable based on peers you may be familiar with?

did you get shares as part of the merger? I havent gotten any yet