Thoughts on the market and where we see upside and opportunity

As I sat down to write my annual letter, I had just read "Are We in a Bubble? - Honestly: Yes" (from the always sublime Geoff Gannon), so I wanted to put some thoughts on market valuations down. My views ended up sharing a lot with this post from Albert Bridge Capital (I had already written my first draft before reading that post and was dismayed to see how many viewpoints we shared, something that happens quite often in investing!). Anyway, the excerpt on market valuations and where we see opportunity is below; enjoy!

Thoughts on the market and where we see upside

We spend most of our time looking for individually mispriced securities, not at the overall market, and we consider ourselves neither market timers nor macro experts. Nevertheless, I wanted to spend a bit of time talking about the overall state of the markets, since I think it helps paint the framework for how we’ve constructed our portfolio and why we feel so good about it performing well in any market type (bull or bear) going forward.
Valuing markets is tough. Short term metrics like price to trailing earnings can be easily thrown off by cyclical earnings booms or busts. Consider, for example, the chart below, which shows the trailing P/E of the S&P 500. The most expensive the market has ever been on this metric was actually during the financial crisis. With hindsight, it’s clear stocks were a screaming buy during the financial crisis, but because earnings had been wiped out, stocks actually looked extremely expensive!

http://www.multpl.com/
So rather than look at short term valuation metrics, I prefer to look at longer term metrics which should smooth out cyclical earnings booms and busts. Two of the best metrics are total market cap to US GDP (also known as the “Buffett Indicator”, as he has professed using it to gauge the market) and cyclically adjusted price to earnings (“CAPE”) ratio. On both of those metrics, stocks today are approaching all-time highs. 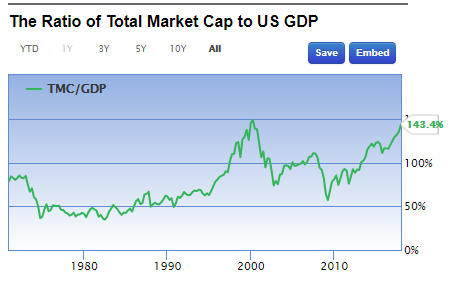 http://www.multpl.com/shiller-pe/
Despite the fact stocks are approaching all-time highs on longer term valuation ratios, I still think the overall market is fully but fairly valued, not significantly overpriced or in a bubble. Why? Because stock valuations can’t be looked at in a vacuum; instead, they need to be considered against alternative investment opportunities and, in particular, the prevailing interest rates. The best measure for interest rates is generally the 10 year treasury, which currently yields just under 2.5%. With stocks trading for ~33x cyclically adjusted earnings, that would imply stocks currently yield ~3% on a cyclically adjusted basis (yield is simply the inverse of earnings multiples). So, even on a cyclically adjusted basis, stocks are actually yielding more than treasuries, and, unlike treasuries, stocks’ yield will grow over time as earnings grow (and earnings may grow mightily in the near term, driven by a global economy firing on all cylinders and domestic tax reform). So when I look at stocks in today’s interest rate environment, I still think they’re pretty fairly valued versus alternative investment options.
Some investors might argue that interest rates are in a bubble, and because interest rates are in a bubble we can’t use them to support today’s stock valuations. Maybe interest rates are in a bubble, but I would counter that line of thinking with two points. Most people who say interest rates are in a bubble say that because interest rates have tended to be higher in the past and will inevitability “mean revert” higher. I certainly understand that logic, but I am far from convinced by it. Similar logic has been applied in Japan for decades in what has become known as the “widow maker” trade because it never pays off / interest rates never rise. If we zoom out even further and think conceptually, interest rates should represent the balance between supply of investment capital and demand for investment capital. On the supply side, the world is awash in capital: I see pension funds, family offices, sovereign funds, and private equity funds all desperately searching for places to put money to work. On the demand side, I see the economy continuing to shift from asset / capital heavy industries like manufacturing to asset / capital light businesses like technology and healthcare. In other words, I see an increasing supply of capital and decreasing demands for it, so it makes sense to me that interest rates today should be structurally lower than they were ten / twenty / fifty years ago. Even if interest rates really are in some sort of bubble and headed higher, the best thing to do would be to short bonds, not to avoid stocks. So even assuming someone could successfully predict a bubble in interest rates I’m not sure it’s fair to use that to attack stock valuations. To be clear, I personally have no view on interest rates and potential over or under valuation; I’m simply trying to show how current stock valuations can be supported by current interest rates!
Another interesting thing about market valuations is that stock markets are increasingly dominated by large tech companies. Apple, Microsoft, Google, Amazon, Facebook are currently the five largest components of the S&P 500 and make up ~15% of that index. In 2017, all five of these stocks were on a tear; combined, they were responsible for roughly a quarter of the S&P’s ~22% total return, and this performance continues a multi-decade run for all of these stocks that have seen them drive a large percentage of the S&P 500’s returns. I state this neither to belabor the fact nor to celebrate it but simply to point out that investors in the main indices are increasingly invested in and dependent on the returns of these huge tech companies.
With valuation and tech companies discussed, the last thing I want to mention is the continued increase in indexation / the rise of passive and quantitative investing. This has been well discussed in multiple places, so I will not dive into the point here. To summarize: passive investing as a percent of the overall market continues to increase, and in what remains of the active investing market, the largest trend is towards quantitative investing (which is dominated by computers and models). Again, I am neither belaboring the point nor celebrating it; I am simply stating it as a fact.
So why do I mention these things? Because I think they are important for understanding how we have constructed our portfolio, why we’re so excited for the portfolio’s prospects in 2018, and why we think the portfolio will perform well regardless of how markets perform going forward.

There is no question that we live in the digital world and from this perspective; it is significant that your business has magnificent presence in the digital space. Alex Mirza

To comment on the interest rate point above: most equity models incorporate a static discount rate to evaluate a company's stock price, but realistically you should probably incorporate expected pricing for the 10 year UST (I recommend the forward strip) to account for a changing discount rate.

Thanks- these are some really good points

A couple of points:
It would be interesting to see how much of the overall market cap is represented by stocks that don't represent GDP - such as foreign stocks that do little or no business in the US.

Also the GDP ratio metric fails to account that many US stocks make generate their sales and profits from economic activity outside the US. Also US GDP is greatly understated because it doesn't capture the informal sector, non-cash or unrecorded transactions, unpaid work such as biking/vs. driving a car) volunteering, gardening, housekeeping, cooking, illicit activities such as prostitution/drug production, etc. childcare, etc. So these factors should be taken into account. GDP, like inflation measures also fails to account for increases (on the whole) in product quality.

With comparable investment opportunities - bond yields are usually lower because of equities risk premium, but CAPM and dividend growth models, while not without flaws, show that prices are already reflecting future dividend growth (assumes that all earnings at some point will be paid out). So to say that you need to add back dividend appreciation potential to the expected return of equities is double counting.

I could also labor on how not all economic activity is equal (a bomb dropped on Iraq) generates less future wealth and GDP than say the same materials used to build a school, factory, or laboratory. Most importantly, as the economy evolves over time and GDP, inflation, and productivity measures have not kept pace. In fact, GDP measures do a terrible job of measuring the value generated in an valuable outputs generated/consumed are information, knowledge, and health let alone something as intangible as leisure. So MarketCap to GDP ratio a one of many rough metrics one might use to track stock market valuations but it's decreasingly meaningful than it was a decade or two ago let alone in 1970. There is one reason why it might remain a powerful indicator of valuaion: "if most investors believe in it and then it can become self-prophesizing and impact investor behavior regardless of its accuracy or its composition. After all, value is what people are willing to pay for something.