Comcast and the "curse" of "diversified holdings" companies $CMCSA

I was swapping thoughts back and forth with a few people on Comcast (disclosure: long) and the cable industry in general last night and thought I'd put some pen to paper.

The reason for the "thought swap" was (obviously) Comcast's recent bid to buy Sky, which is what I want to focus on here (I'll give some thoughts on Comcast's valuation at the end of this post if you're interested). The market reaction to the Sky bid has been awful: Comcast's shares were immediately down >5% on news of the bid, have declined >10% in the past month (and taken most of the cable sector down with it), and analysts and investors have been rushing to criticize / downgrade the company. The reaction certainly makes sense: investors wanted to see Comcast increase its leverage by increasing share buybacks, not take on debt to diversify out of their cable business and into a European satellite business. You can tell management was ready for this criticism: their 19 page acquisition deck included three "trust us; we have a good track record" slides (slides 14-16), and management has responded to the criticism by saying (this is my summary of their words) "you doubted us when we bought AT&T broadband and you doubted us when we bought NBC; both of those turned out great so trust us here". 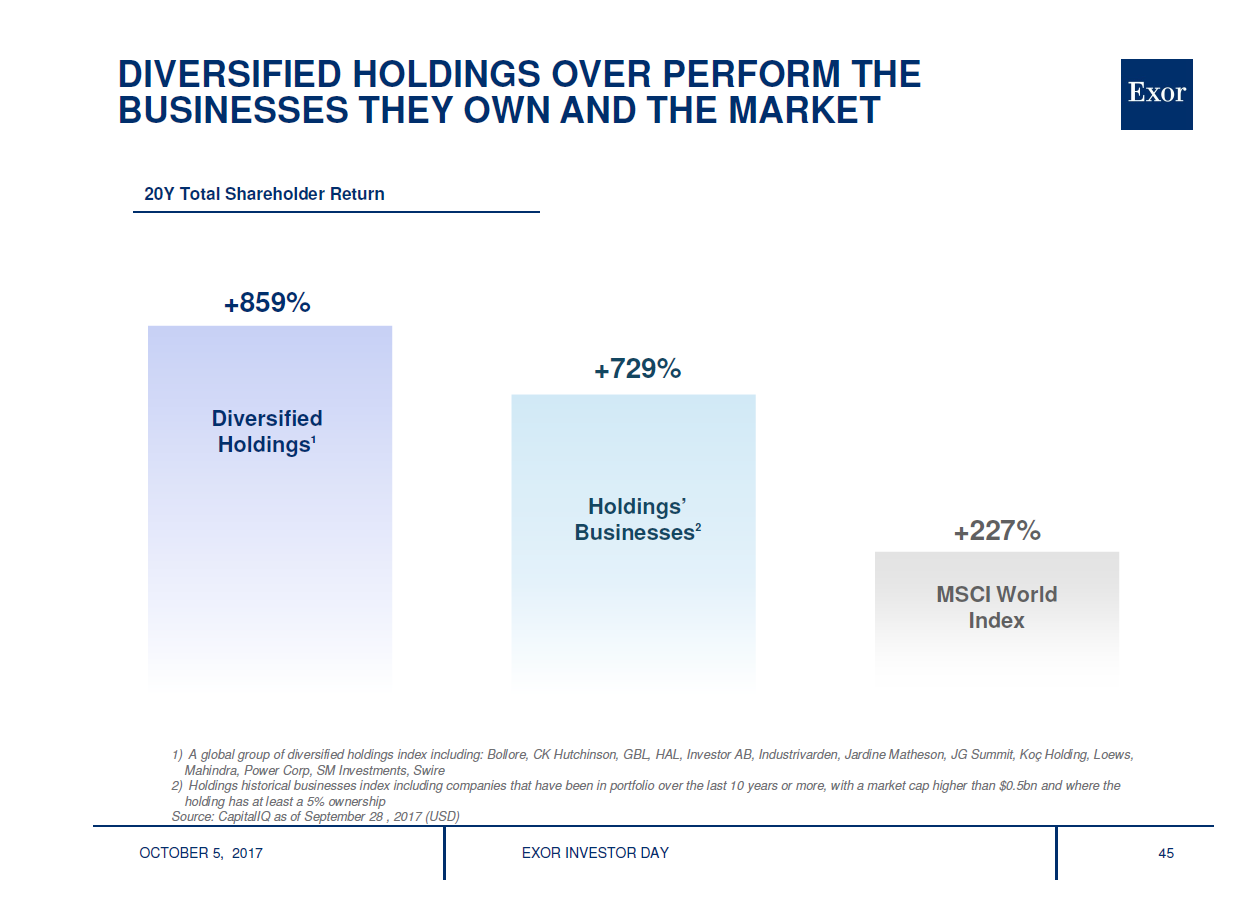 Most of the peers on that slide tend to follow a broadly similar strategy: long term holdings of above average business combined with conservative debt levels. And this strategy isn’t completely unique to those holding companies: this Economist article (which Exor owns) mentions a bunch of controlled companies (including EXOR and Berkshire) and dives into how family-controlled companies tend to take longer term views of businesses, run with lower than average leverage, and outperform over time.
Anyway, you can probably tell where I’m going with this. Most investors (including me!) would prefer Comcast take their leverage levels up from their laughably low current levels (~2.2x) and use the proceeds to repurchase shares. Most of us see the Sky transaction as a distraction at best and a stepping stone to a value destructive overbid for Fox at worst. Those concerns are all real. But both Comcast’s business profile and their track record puts them squarely into the “Diversified Holdings” category (yes, they don't fit the exact definition, but I think they 100% fit the spirit / profile of one), and given the track record I’d guess it’s pretty unlikely they’d ever pursue an acquisition that actually resulted in a long term 10%+ hit to shareholder value (which is what the market is pricing in currently). 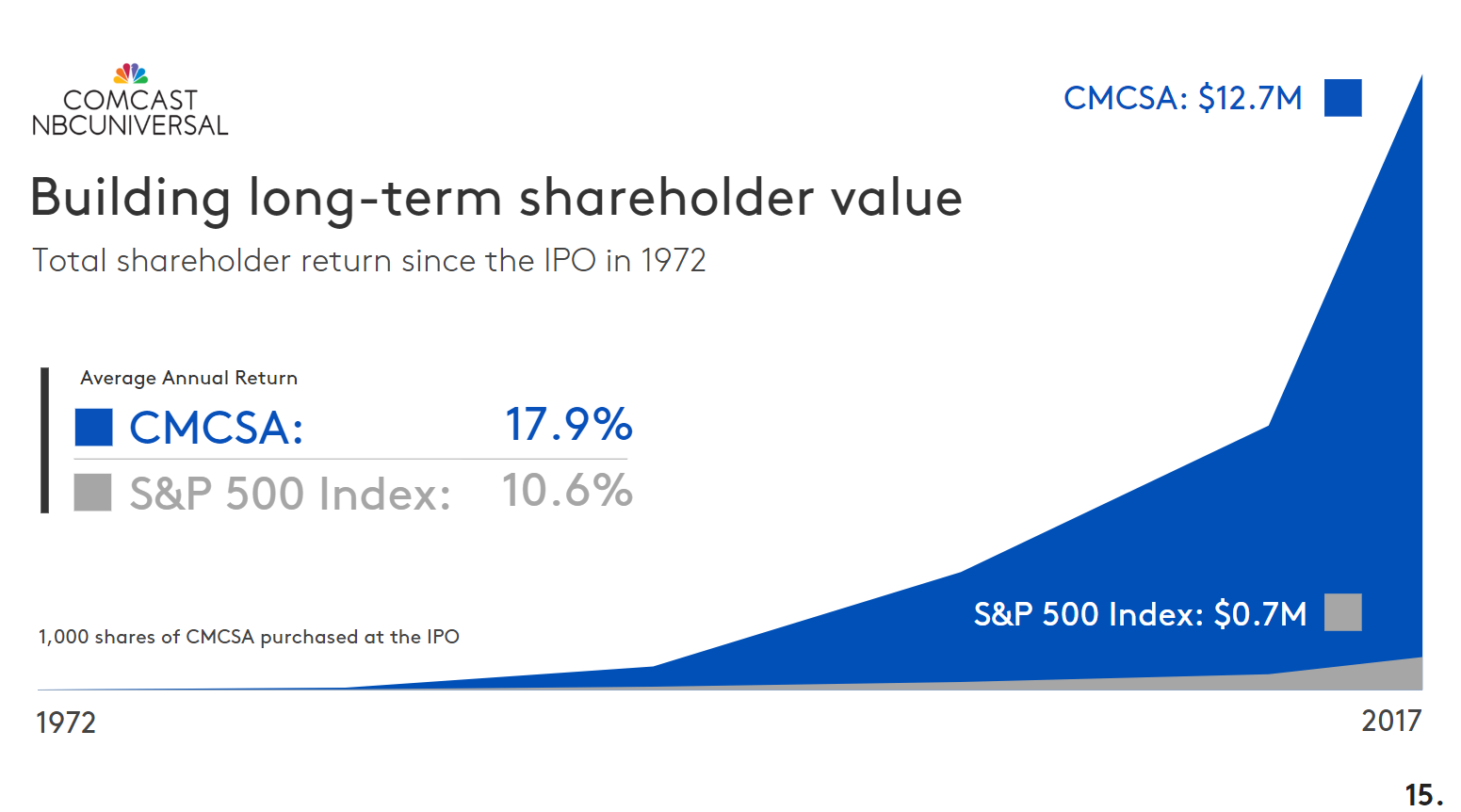 You’ll note I titled this post “the curse of the diversified holdings company”. Why is that? Because it probably would be better for Comcast to drop the Sky bid and just pursue a levered buyback strategy (a la Charter, which I am long). Heck, Comcast management likes to point to the success of the NBC acquisition, but if you compare the NBC deal to the opportunity cost of pursuing a levered buyback of Comcast shares over the past decade the NBC acquisition was probably a dud. But part of what makes “diversified holdings” companies great over the long term seems to be their conservatism (their lack of leverage leads to fewer blow ups, and their long term vision makes them the buyer of choice for family sellers who are willing to sell at lower multiples to avoid having their company dismantled for a quick buck), and that conservatism does not mesh well with a levered buyback strategy. So the funny thing is that the very thing that would make these companies so attractive for a levered buyback strategy (great assets sold to them at nice prices) is also the thing that keeps them from pursuing “optimal” strategies that could juice returns. It makes you appreciate the beauty / genius of Berkshire a bit more: the company clearly could have done better with a bit more leverage over its history, but taking on more debt might have kept Buffett from getting his “conservative” reputation and may have prevented him from getting some of the really cheap deals from family sellers (or the "buyer of last resort" deals during the financial crisis).
Other odds and ends 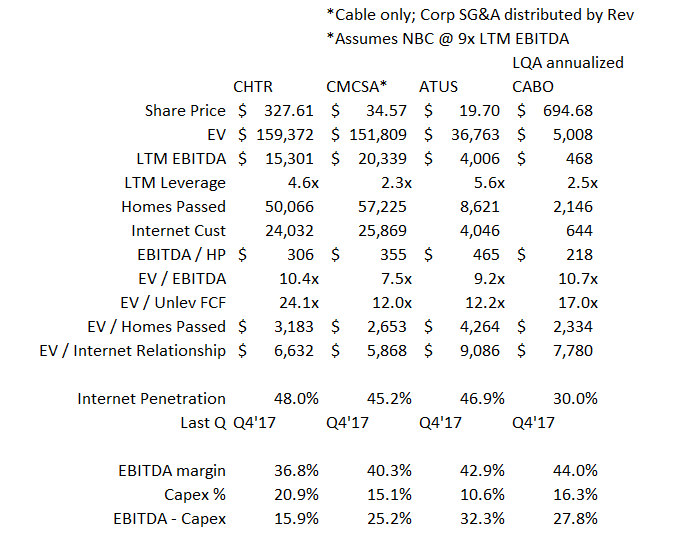 Local and international non-profit organizations are tapping in the pro-business environment existing in Singapore. The World Bank has rated Singapore as the number one city in the world to establish a business in. Alexander Mirza

However, similarly as they would begin bringing their child young lady up in a pieceful world, the witch is back. black magic Melbourne Curse help

Hi Tourist, I think there are some restrictions on SA about 'publishing' the content elsewhere. I'm not a habitual user of SA so I don't know for sure if that applies to sending the article to people directly. Please send me a message on SA and I'll see what's the best way. Thanks.

Great comments, great perspective. The articles on SA have gone PRO. Is there any other way I might be able to get to them?

Are you concerned about the slowed y-o-y broadband growth across the industry? And the AT&T overbuild? Cable Cos talk about 80% penetration, but the household income distribution in the US is such that that 80% could well be the entire TAM as the other 20% cannot afford even broadband-only subscriptions. Is the mobility project a defensive move, seeing as 5G will bring convergence to the wireless players? Even though a 5G roll-out might take many years, once the threat is confirmed, I think cable terminal values could come down substantially, similar to cable networks now. These are some of the questions I think about as to my cable investments, would love to hear your view on the same.

Thanks Vineet. I saw and liked your articles.

I don't think Hulu matters. They own 30% of it. Even if Hulu is worth $20B, a near 4x from TWX's valuation, it's <$2/share swing for CMCSA. Nice, but not meaningful. What matters if getting the cable valuation correct.

Andrew, thank you for your article. One observation I would make is that "you can always buy back stock later", which is a long-term view. It's totally within your control when to do it and at what price. But assets you want to own don't come available as often. So when they do, you've got to act. Comcast could've been buying back and avoided AT&T Broadband, Dreamworks, NBCU, etc. Pretty sure, the investors of that time would've loved a large buy back too (just as they would do now). But Roberts is running the company for the next 30 years. Perhaps Berkshire, in 1974-5, could've bought back a ton of stock at a discount. But they kept the capital and did well with it, as you know. I do agree with you that slightly higher leverage with a buyback would be nice. But it doesn't seem to be necessary for long-term holders, if we take that phrase seriously, to be done at this exact moment. In fact, I wrote two articles on SA about CMCSA. Part I was written before the Sky bid and assumed a buyback, so I'm on the same page as you. I just don't think the Sky bid is as terrible as the US analysts have made it out to be. Sky is not the same as DTV or DISH for many reasons. Now, with CMCSA at $33, almost the entire EV of SKY is gone from the CMCSA EV (8*4.8 = $38.4 bn), so Sky is now all upside (if there's upside in that transaction) and if Sky doesn't happen, it's a very very cheap stock. And if it does happen and is truly a terrible transaction, that's already priced in so you aren't paying for it. Further (and in response to Unknown's comment above), I think now looking at Cable Co's we've got to do more FCF work rather than EV/EBITDA, because of the tax rate changes and accelerated depreciation on CapEx. (Also, for CMCSA, the value of the Hulu stake, etc. need to be subtracted from EV, making this even cheaper than it would otherwise appear). I've attempted this. This comment is already getting long, so I won't reproduce my analysis here, but you can see it here, if interested:

Thanks again for your blog and useful articles re: cable & media.

Makes sense, but would be better if they exercised the options and held the shares vs. selling

Much of the selling has been due to expiring options - ie forced sales.

CAGR is 2015-2017 based on 2017 10K. Also, this may potentially mean nothing, but the insider selling is just another data point to factor in: http://openinsider.com/search?q=cmcsa

Why are you long charter at 24x FCF? Comcast at 12x looks way better value!?
Same EV, and Comcast has higher EBITDA too! Plus lower debt so less risk...