A single so far, but the Braves could turn into a home run $BATRA

About a year ago, I wrote up the Liberty / Atlanta Braves (BATRA; disclosure: long). Shares were trading at around ~$23/share then and are a hair over $25 today, so the results so far have been acceptable but far from a home run. 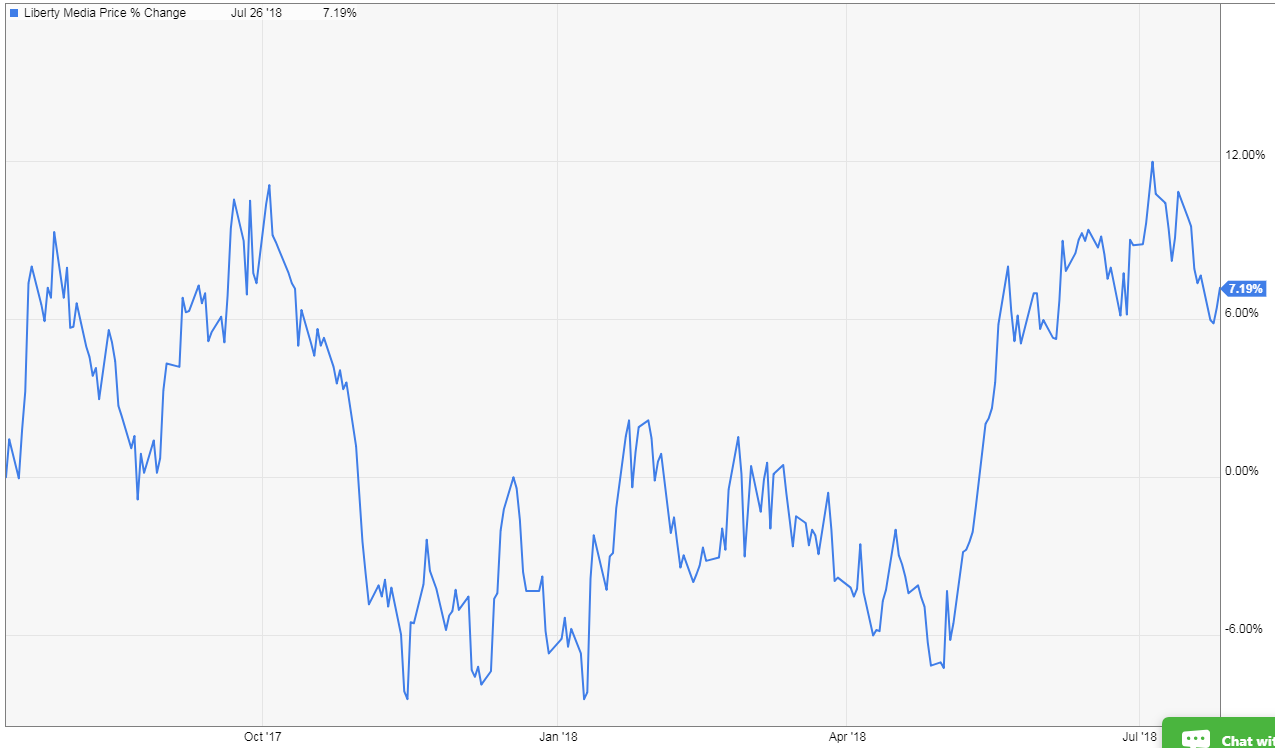 I think that’s set to change in the near future. A combination of a favorable environment for sports franchises and some quietly shrewd moves on the real estate side have made the shares a steal.
The most obvious positive since my last article is the Supreme Court’s Sports Betting ruling. There’s been plenty of ink spilled on that elsewhere (including on this site), so I’m not going to spend too much time on it here. Instead, I’ll just note I think sports gambling is a huge positive for sports franchises, but I’m no where near Mark Cuban’s “sports teams values doubled” take. Among the major sports leagues, I personally think baseball benefits the most from sports gambling (games are really long and (IMO) pretty boring; sports betting will be critical for keeping people engaged / away from Fortnite). Unfortunately, it seems like Georgia is a long way away from sports betting legalization as all governor candidates seem opposed to it, so sports betting might not benefit the Braves specifically in the near term, but the sports gambling tailwind should help boost all sports franchise tides in the near termand it’s near inevitable that Georgia legalizes at some point in the future (though that could be years away)
The other “obvious” positive I’d point out is that the Marlins sold for $1.2B. Yes, we knew about that sale when I wrote up the Braves last year, but we didn’t know quite how bad a place the Marlins were in. The Marlins were losing massive amounts of money and needed to engage in an embarrassing firesale to slash their payroll right after their deal went through. If the Marlins, who lost ~$66m in 2017, could go for $1.2B, then I would venture that the Braves, a team with a better history, a better market, and better economics (they were slightly profitable in 2017), would go for substantially more, particularly given sports betting was legalized after the Marlins sale was done.
Ok, now for some less obvious positives.
Let’s stay focused on the Braves: they’re playing well. Currently, they’re 2.5 games out of the playoffs and have the third best run differential in the NL. Fivethirtyeight has them at just less than a coinflip to make the playoffs. The Braves are an astonishingly young team and were supposed to be a few years away from contending, so to be this good currently suggests they’re set up for a long string of competitiveness. 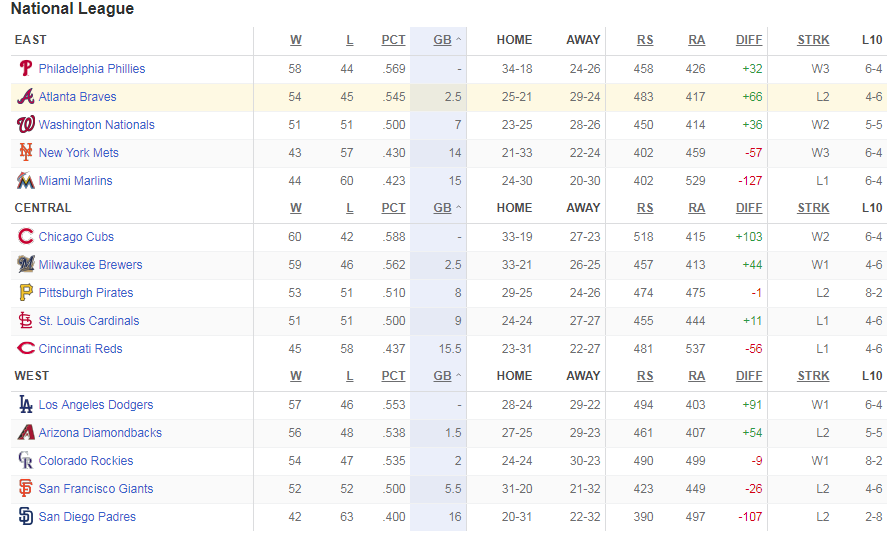 Maybe it seems silly to focus on how the Braves are performing… but on the field performance effects off the field financials. The Braves moved to a new stadium last year and saw their attendance shoot up by almost 25% (from ~25k fans/game to just under 31k). Most people are familiar with the “new stadium bump” (attendance normally shoots up in the first year of a stadium is open) and chalked up the attendance bump to that.... but the Braves are defying any “second year slump” in attendance. Year to date attendance through 46 games is up just over 4% to 32.3k fans/game. And the Braves TV ratings are up an astonishing  51% so far this season (a five year high!). So I’d expect a small short term pickup in the Braves’s financials as their improvement drives continued attendance pickups, and in the medium to longer term their performance improvement should drive even better financials as it opens up new/better sponsorship opportunities and media deals.
Speaking of media deals, one of the lesser known aspects of the Braves is their current TV contract is awful (see my original post for more discussion here). Their TV contract is with Fox, and Disney will need to sell the Fox RSN that holds the Braves’ contract as part of their deal with the DOJ to buy FOX (disclosure: long FOX; short DIS as a hedge). Who knows what happens there, but it’s possible the sales process unlocks significant value for the Braves, either from allowing them to buy the RSN from DIS (Liberty has mentioned starting their own RSN with the Braves when the current contract is up; this would let them accelerate the process) or from allowing the Braves to rework their local media deal with whoever buys the RSN (a bit of a long shot, but certainly within the realm of possibility a buyer is willing to up the annual payments for some extra years on the backend).
Currently, the Braves have a market cap of ~$1.5B and an EV of ~$2B. Forbes places the Braves value at $1.625B. Given the Marlins sold for ~$1.2B and the Braves are in way better shape (both from a talent standpoint and from a financial standpoint) than the Marlins, I absolutely think it’s likely the Braves could sell for at least $2B if they were on the open market today, meaning investors at today’s prices are paying roughly the fair market value of the Braves and getting the Braves mixed use complex (the Battery Atlanta) for free. And the Battery is where I think all the quiet improvements are happening.
Recall that the Battery is a mixed use development developing around the Braves new stadium. The slides below are from their 2017 investor day and gives a bit more info on what the Battery looks like; the first is a picture just so you can see what the area looks like, and the second is an overview of the different pieces of The Battery. 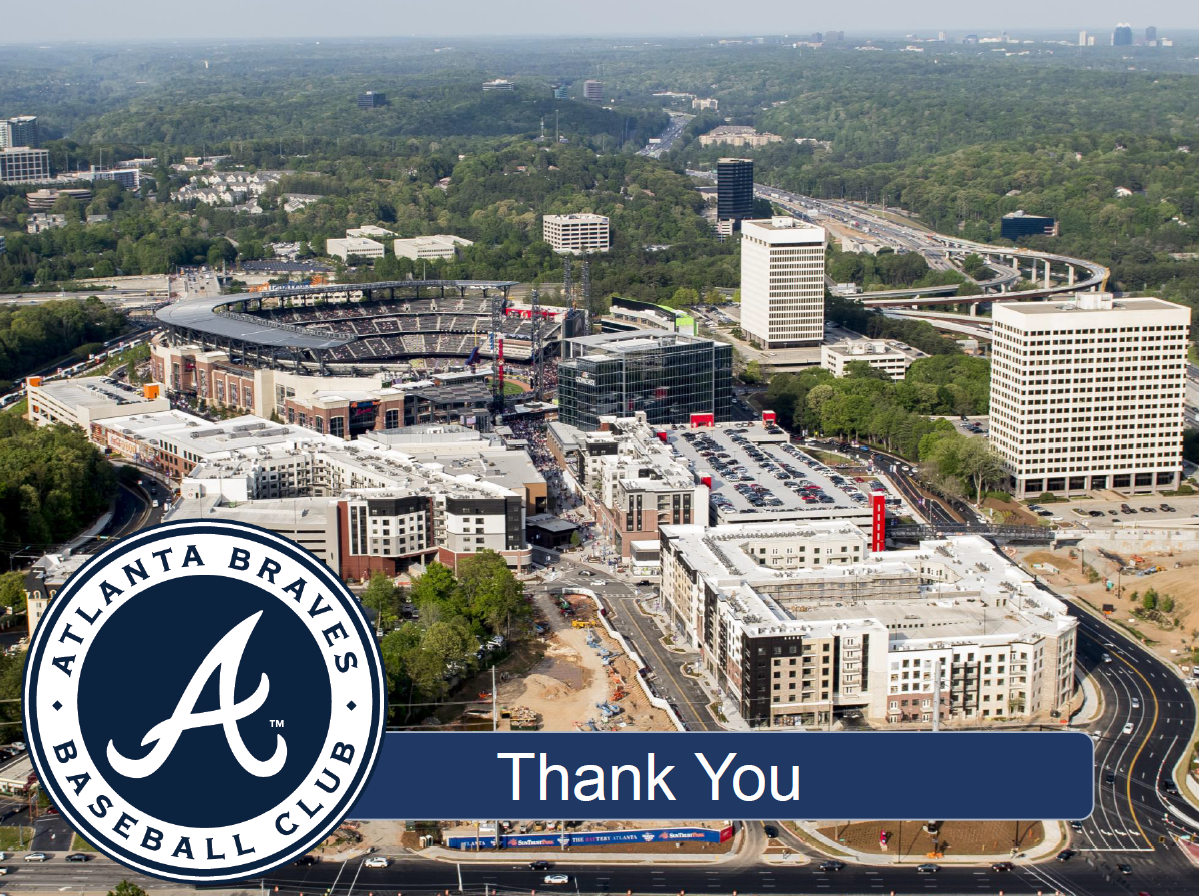 What really intrigues me here is that the Battery wasn’t fully operational until basically this quarter (Q2’18). That means the historical financials show no return (or even a negative return as they incur cost to build it up) from the Battery. The slide below gives some more details on the timing of the Battery becoming fully operational (“expect remaining leases to be filled through Q2-18”). You can also consider that the Comcast office building only opened in November 2017, and the Omni hotel opened in January. 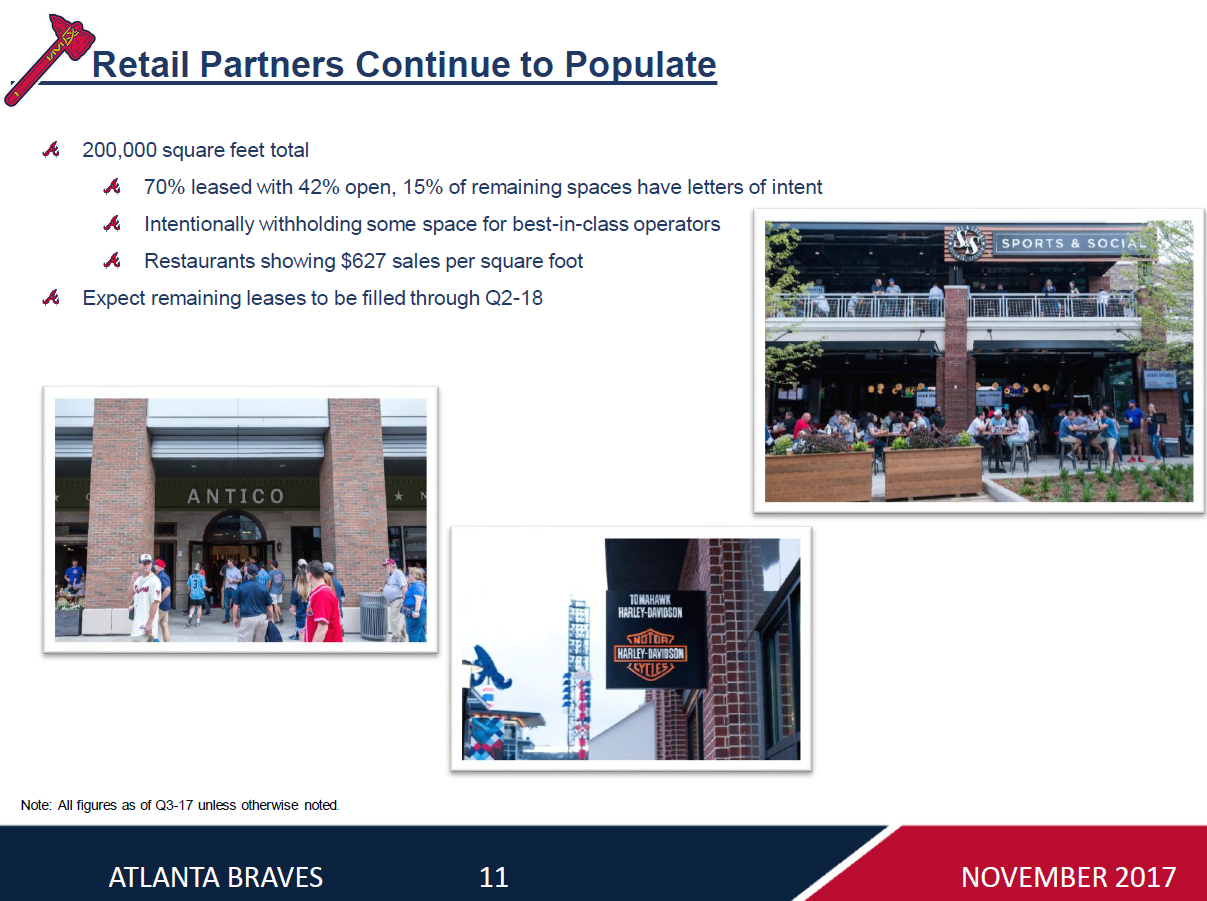 So it’s interesting that we haven’t seen any returns from the Battery on the Braves’ incomes statement yet because all indications are the Battery is a smashing success. For example, the Braves quietly listed their apartment buildings in April, and if you read the quotes around the potential sale it’s not hard to infer that this development is going really well.
As of the end of Q1, the Braves had invested ~$500m into the Battery. Given the development appears to be a success, I’d guess the Battery is currently worth significantly more than their cost basis. However, if we just assume it’s worth the ~$500m invested into it so far, the Battery is worth ~$8.33/share. Add that to the ~$2B valuation for the Braves we discussed earlier and BATRA’s asset value is around $33/share. Given the tracking structure and some tax complications, maybe you want to take a bit of a haircut to that valuation, but you probably need to balance that out against the conservatism of valuing the Battery at cost and that a full auction of the Braves, one of the most storied franchises in baseball, could easily yield more than $2B.
But wait…. There’s more! The Braves own another 19.5 in undeveloped acres around the Battery that they can develop in the future. And I would guess that land is pretty valuable. We got some indications of that yesterday, when thyssenkrupp, in a “collaboration” with the Braves Development Company, announced a new “world-class” headquarters and high-rise test tower located in the BatteryDetails on the project are pretty scarce at this point, but we know the building will be the largest building in Georgia and host over 900 employees when it opens in 2022.
This is pretty big news for the Braves for a few reasons. First, on its own, I would guess the returns for this project are going to be pretty attractive for the Braves. I’m not a development expert, but I’d expect the company would forecast something in the double-digit range for a return on their investment into the new building and will probably invest tens of millions into the building, so the investment should create some value for shareholders. Adding a trophy building like that also improves the value of everything around it, so I’d expect the overall value of the Battery to continue to improve as the development progresses.
But perhaps most important thing is what the building does for the Battery’s sale prospects. Once completed, that building is going to be catnip to potential REIT buyers (a trophy office building in a new built mixed-use area with an investment grade company anchoring a likely long term lease). Owning a mixed use development like the Battery in a taxable C-Corp is pretty inefficient, and I’ve always suspected the end game for the real estate was to find some sort of tax efficient deal to get it in to the hands of a REIT (likely swapping the Battery for shares in the REIT and then spinning the shares off the shareholders). Having a trophy building like the new thyssen HQ in the mix (in addition to their Comcast office buiding with a ~15 year lease and the Omni hotel with a ~20 year lease) just adds to the appeal of the Battery to a potential REIT buyer, so the development hopefully brings us one step closer to the end game for the real estate (a sale at a significant premium to the capital invested into the development).

I wish I could provide more on the Battery and the possibilities for the Braves real estate here, but unfortunately information is somewhat sparse around the project. All I can say is this: to date, the company has invested ~$500m into the project, and all indications are that investment has been very successful plus there are multiple opportunities to increase that value by continuing to build / develop around the Battery. At today’s share prices, investors are basically getting that whole development for free. Combine the “free” development with continued appreciation from the Braves (anyone reading this blog knows how bullish I am on continued appreciation for sports franchise valuations), and it’s not hard to see why I think Braves shares are a steal at these levels.