Some $DVMT updates and additional thoughts

Now that I’ve had ~72 hours to reflect on getting screwed by Dell / talk to some other Dell victims (disclosure: long DVMT), I wanted to provide a quick update to my Tuesday write up.

In general, I think everything I said was within the realm of reasonableness. The biggest pushback I got was on my part about bumping in cash instead of stock. Several readers (correctly) pointed out that I shouldn’t use the stub equity value to value Dell’s equity; instead, I should use the implied equity value (i.e. the stub equity value plus the value of all of their equity stakes) because that’s the market cap Dell will actually have. A silly mistake on my part (though, to be fair to myself, mistakes tend to get made when you’re rushing through a situation / deal in less than 24 hours!). 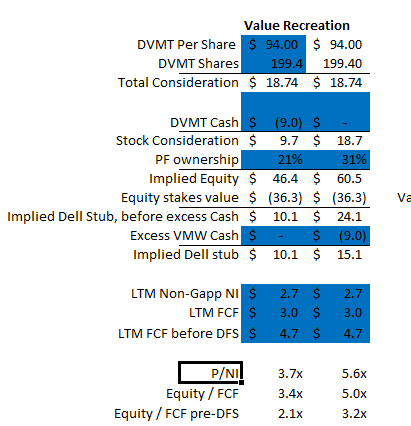 That change makes a big difference: even though the Dell stub still has a negative implied equity value (looking through the value they’re stealing from DVMT), having that large of an equity value gives them a currency to bump their DVMT bid. If they’re simply willing to bump DVMT’s ownership from 21% to 26%, then the value of DVMT’s equity goes up by ~$2.3B ($46.4B *(26% - 21%)), or ~$11.60/share. That bump would likely be enough to get a deal done, and Dell would still be capturing $8-10B of value for themselves by taking out DVMT at a huge discount to their VMW shares.
So it probably makes sense that if/ when Dell comes with a bump, he / they will use equity, not cash. Sure, he’s issuing undervalued Dell shares, but the company is extremely levered already (making cash a precious commodity) and who cares if you issue shares a little bit on the cheap (say for $2B less than they’re worth) if it lets you lock in an $8B gain on the DVMT / VMW side.
Using the proper equity value also gives Dell a bit more leverage in the negotiations: I had said in my original article Dell couldn’t credibly threaten DVMT with a “take this deal or we will IPO and then force convert you” scenario; with a semi-substantial bit of equity here (though a still negative core value) Dell does have some leverage to threaten an IPO. Ultimately, I still think the market is valuing core Dell cheaply enough that an IPO would be a tough slog. Plus, if Dell is going public for the somewhat explicit purpose of screwing over the DVMT minority shareholders, who is going to be lining up to buy a Dell IPO and become a Dell minority shareholder? "Sure, you screwed your minority shareholders over last time you were public and you semi-stole it from them in an IPO, but please take my money and give me non-voting shares in your highly levered controlled company so that you can rob a different set of minority shareholders." Seems unlikely to me.
Some other odds and ends

Do you see the same?

Sounds like the main takeaways don’t really change - I.e. Dell is issuing stock on a cheap basis and getting DVMT at a massive discount to intrinsic value relative to VMW. Correct way to look at this?