Note: I wrote the below way back in January 2016. Over the weekend, I'll be posting a long update on the company (update: that post is now live), but the update doesn't make sense without this background, so I needed to get this out first. Enjoy!
In May 2015, DC Capital offered to buy Hill International (HIL; disclosure: long) for $5.50 a share, a 41% premium to the going share price. The offer eventually led to a bruising proxy fight against Bulldog Investors, who wanted the company to hire an investment banker and pursue a sale / auction. Management eventually won the proxy by promising to cut costs, increase margins, and improve shareholder returns. With the stock currently trading for ~$3/share, it’s clear that management has failed. Fortunately for long-suffering shareholders, another proxy campaign is likely brewing, and management is unlikely to win this one. A strategic process to sell the company should take place quickly, and HIL is likely to be sold for a significant premium to today’s share price.
Let’s start with a brief overview of Hill (Hill has been written up on VIC 3 times if you’re interested in more: December 2006, April 2014, and May 2015. The last write up includes the particularly apt comment that the company will not be sold unless the activist takes the board.). Hill is the seventh largest construction management firm and ninth largest program management firm headquartered in the U.S. They provide their services primarily to the buildings, transportation, environmental, energy, and industrial markets. In project management, Hill pursues an “agency” model where they use their expertise to help identify sources of trouble on a construction project before they turn into a costly problem. While closely related to a general contractor business, this is a much lower risk business: a general contractor will typically assume project completion risk, which puts them at risk of cost overruns or delays, while Hill’s agency model eliminates that type of “at risk” construction service (think of it as a “cost plus” model). In their Construction Claims group, Hill helps clients prevent or resolve claims and disputes based on schedule delays, cost overruns, or any other problems that occur in major construction projects. Typical services include claims preparation, analysis and review, and litigation support.
Hill was founded in 1976 by Irv Richter. The company went public in 2006. Irv is still the Chairman, and his son, David Richter, has been CEO since December 2014. Shares did well from the IPO until just before the financial crisis, but they collapsed during the financial crisis and never recovered. Investors over the past few years have done particularly poorly. 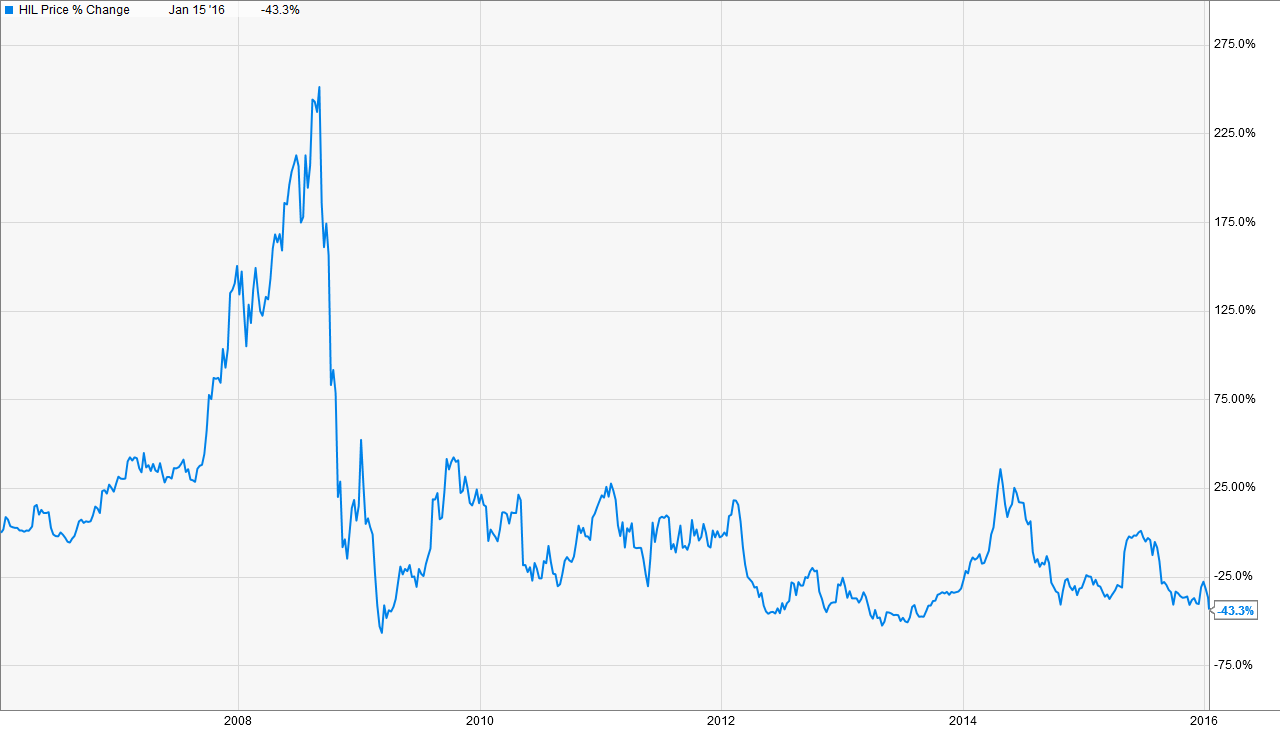 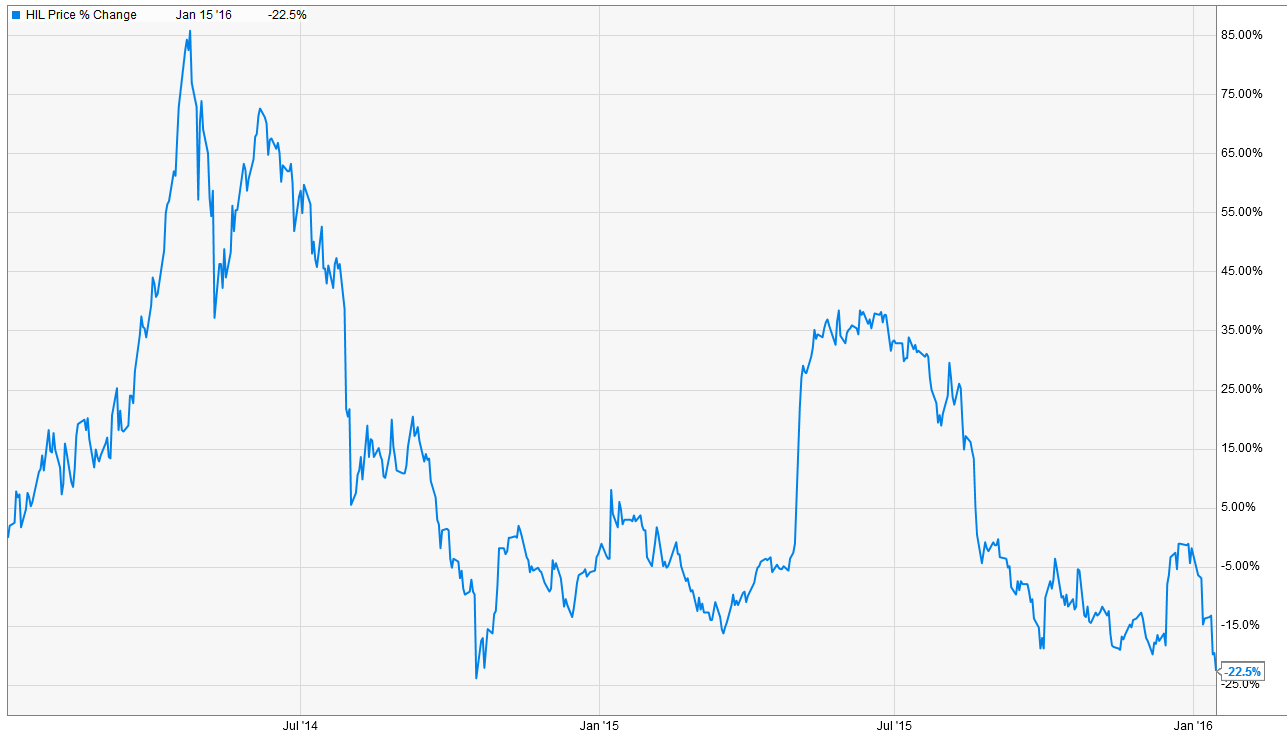 Hill’s poor shareholder returns over the past few years can be explained by a variety of factors, but a particularly large one has been issues with Libya. Hill provided management services for several major projects to the government of Libya, and Libya was one of their largest markets (accounted for almost 10% of backlog at YE2010). The political unrest that started in 2011 led to a suspension of their Libya work. At that time, Libya owed Hill ~$60m. In the ensuing years, Hill has managed to collect some of this money, but they are still owed ~$50m. Management has consistently maintained that they expect to collect on the this money and that Libya will be a strong market for them once things settle down, but in the meantime the Libya receivable stretched Hill’s balance sheet and eventually led to Hill restating historical results.
Hill actually recovered from the Libya loss well. Sales have grown strongly since FY2011, driven mainly by organic growth in the Middle East. Operating profits rebounded nicely as well; however, shareholders for the most part did not see a corresponding increase in share price as most of the profit gains were offset by interest expense from a heavy debt burden and then significant dilution in order to reduce that debt burden. However, while shareholders haven’t seen any gains as the business has recovered, top management certainly has benefited. 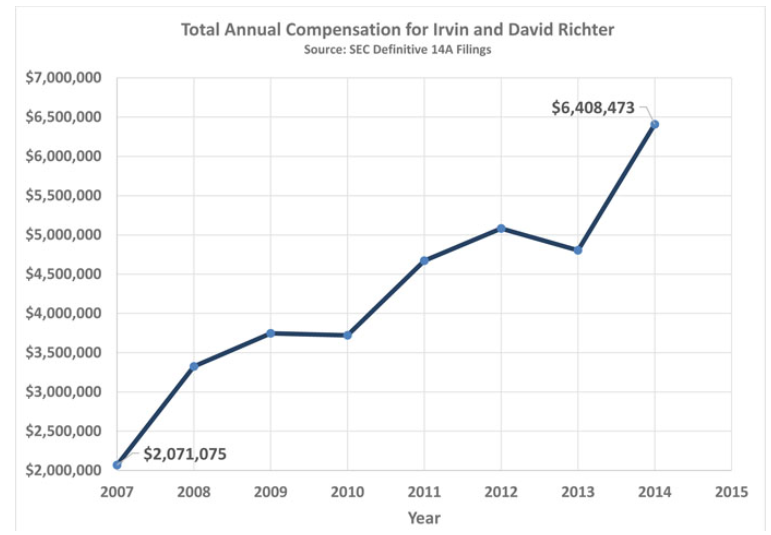 Source
In May 2015, shareholders finally received some good news: the aforementioned DC Capital buyout offer at $5.50/share. Hill immediately rejected the offer, calling the offer “completely unacceptable” and “extremely inadequate”, and put into place a poison pill program. However, Hill faced something of a shareholder revolt. Bulldog Investors ran a proxy campaign to make the board hire an investment banker to explore a sale and rescind the poison pill, and ISS supported Bulldog’s recommendations. Hill’s management eventually managed to beat the activists, but it was an extremely close vote: Hill’s management team won the vote with about 55% of the vote in favor management and ~43% in favor of the activists / hiring an investment bank. That’s a very close vote, and given management controls a significant amount of stock, it means the majority of outside shareholders voted in favor of the activists / hiring an investment bank. In order win enough outside votes to beat off the activists, Hill’s management also had to promise significant cost cutting and that EBITDA margins would increase from the 6.6% they delivered in 2014 to 8-10% in 2015.
Today, shareholders are probably wishing they had gone with DC Capital’s “completely unacceptable” and “extremely inadequate” $5.50 offer. Shares are currently trading at ~$3 per share. In December, DC Partners again made an offer to buy Hill for $4.75/share but was again rebuffed by Hill.
So what does DC Capital see in Hill?
First, they probably see an opportunity to buy Hill at an attractive valuation. Hill has guided to $630-640m in Consulting Fee Revenue (CFR) in 2015 and 8-9% EBITDA margins. DC Capital bought a competitor, Michael Baker, back in 2013, and paid ~8x EBITDA. At $4.75, DC would be buying Hill for less than 7.5x EBITDA.
Second, DC Capital probably sees significant opportunities for cost cutting. There are almost certainly significant synergies from combining Hill with Michael Baker. But even without synergies, any reasonable acquirer could cut significant costs from Hill’s structure simply by attacking it’s bloated SG&A costs.
How can we determine Hill’s SG&A costs excessive? There are no great publicly traded peers with similar size to Hill, but we can look back to Michael Baker’s 2012 10-K for a reasonable benchmark. Michael Baker would soon be acquired by an affiliate of DC Capital for a transaction that valued the company at ~$397m (higher than Hill’s current EV), though to be fair Baker’s revenue and EBITDA projections (see p. 37) were slightly lower than Hill’s current revenue / EBITDA. Still, it makes for a decent comparison, and the differences are striking:
There are a couple of additional factors that suggest Hill might be a bit too generous with their executive compensation:
Each of these individual data points could be meaningless. But, put together, it suggests that Hill’s SG&A costs remain significantly elevated, and DC Capital or some other acquirer would likely have a field day with cutting corporate costs after an acquisition. Simply bringing the board and executive team’s costs in line with Michael Bakers’ could save ~$5m per year, which would improve EBITDA by ~10%, and a strategic acquirer would likely realize significantly higher cost savings from additional operational synergies.
Before moving on, it’s worth discussing DC Capital’s acquisition of Michael Baker a bit further, because the deal holds striking similarities to the current Hill offer. DC Capital opened in July 2012 up by buying 5.2% of Baker in the open market. In December 2012, they offered to purchase the whole company for $24.25. This offer was at a significant premium to the going share price, and the offer received support from an activist investor. Finally, in July 2013, DC Capital and Baker reached a deal at $40.50 per share.
Why is that background so fascinating for Hill shareholders? Several reasons
So, all in, it seems like Hill is a perfect set up for value realization. Clear strategic interest, a management team that is clearly on the hot seat, and an activist who is likely to continue pushing for a sale if management can’t quickly deliver value.
Sounds perfect, right? Well, there is one big risk: oil. While less than 15% of Hill’s revenue are from energy projects directly, almost 50% of revenue are from the Middle East, and almost 20% of revenue is from the United Arab Emirates. In general, their Middle East and African clients have heavy ties to oil, and it’s impossible to forecast how the huge decline in oil will affect their demand for Hill’s services. With the continued decline of oil prices plus geopolitical uncertainty in the Middle East, the short term outlook for Hill’s business looks increasingly murky. In fact, the effects of the oil decline are already beginning to show up in Hill’s leading indicators: while YTD organic revenue growth has been in the high single digits, backlog has shrunk from $1.036B at December 2014 to $879m at September 2015, and twelve month backlog is down from $467m to $397m.
That murky outlook backlog decline is among the biggest risk to Hill investors at today’s prices, as it could result in reduced demand for Hill in a sale. It’s also worth noting that Hill’s credit agreement is rather tight and maximum leverage ratio drops from 3.25x currently to 2.75x by September 2016. Hill is currently at 3.03x net leverage; while they’ll get a slight boost in EBITDA going forward as the full effects of their cost cutting flow through, that could be more than offset by future revenue declines if the decrease in backlog can’t quickly turn around. The murky outlook and tight leverage could work in investors favor: it could encourage management to simply sell and take the premium rather than worry about negotiating with banks while fighting another proxy / activist battle.

What happens if no sale takes place and management has to wade through that murky future as a standalone company? Both total and twelve month backlog today are almost identical to backlog levels at the start of fiscal 2013. In 2013, Hill did $512m in revenue and $43m in EBITDA. There’s no reason to think Hill couldn’t do similar levels over the next twelve months, particularly given the recent cost cutting program and that activists will be watching management and spending levels very closely. Assuming they did $43m in EBITDA, shares would be trading for just above 6x EBITDA. Looking simply at 2015 guidance of $630-640m in revenue with 8-9% margins, shares at today’s prices would be trading for under 5.5x EBITDA on the low end and 4.8x on the high end. All of those multiples look reasonably cheap given the asset light nature of the business (capex = <1% of sales) leads to strong cash flow generation. Looking longer term, HIL should be able to resume organic growth as their Middle Eastern client’s budgets stabilize, and would have significant organic growth prospects if oil prices begin to increase. In addition, this analysis has given no value to the ~$50m Libyan receivable (~$1/share in value), and HIL would be well positioned to win business in Libya and/or Iran as those companies re-open to the outside world.