But, as my Christmas present to you, this week I’m going to “present” (pun intended) three (note: I was planning four, but unfortunately decided not to present one due to illiquidity) of my favorite special situations in a bit of a shallower manner; instead of a full deep dive, I’ll just provide a situation overview with a little background and some risks. Why chose these three situations as a Christmas present? My reasoning is that there is a decent chance that all three of them will “not be with us” (i.e. will have played out) by this time next year, so if I don’t “gift” them to you this Christmas I’ll never have the chance to! I’m also going to post the ideas in a bit of an order: the first post will be the most liquid, the least quirky, and the least likely to play out in the next year, while the last post will be the least liquid, the most quirky, and the most likely to play out next year. If you missed it, you can find my first idea, DVMT (disclosure: long), here and my second idea, HRG (disclosure: long), here.

So, now it’s time for the least liquid and most quirky idea: Yume (YUME; disclosure: long). And because this post was running extremely long (I know I said more shallow analysis, but I’m wordy and get into writing these things!), I’m going to break the post into two parts. Part one today will provide a situation overview, and part two tomorrow will dive deeper into valuation of the combined company. (UPDATE: part 2 is now live here)
Before we get into the post, a note: I wrote the bulk of this on Tuesday (December 26th) when YUME shares traded at $3.60 and RTHM shares were ~£240, roughly the levels they've been trading for the past month. As I write this update (at market close Weds, December 27th), RTHM and YUME have each traded up a decent bit (to ~£250 and ~$4.00, respectively), likely because RTHM / YUME finally filed their form F-4 showing a bit more info on the combined company for the first time (the only other logical explanation would be North Korean hackers breaking into my computer, reading my post in real time, and going crazy buying because they agreed with the thesis). Despite the run, there is still a bit of spread (~2% gross) and the pro forma company still looks quiet cheap (the focus of tomorrow’s part two post!), but keep in mind as you read this that some of the numbers may be slightly stale and the spread compression takes away some of the pure “arb” upside. I’ve included an updated capital structure and deal spread analysis chart below so that I didn’t have to update the whole article / scrap posting the whole thing. On to the post! 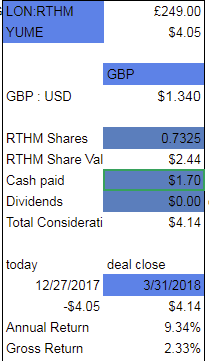 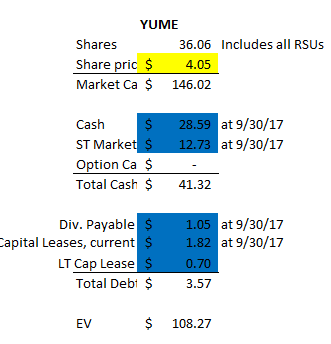 Long time readers may remember a post on YUME earlier this year. I’d encourage reading that post for some background, but the basics are YUME was mismanaged for years, some activists stepped in and took control of the board. I thought the company was likely to be sold. In early September, that prediction turned out to be right, as Yume announced a deal to be acquired by RhythmOne (RTHM) in a cash and stock deal valued at $5.25.
Which brings us to today. YUME shares trade for ~$3.60, well below that $5.25 deal price. What’s going on?
Well, RTHM shares have absolutely collapsed, from a split adjusted figure of ~£375 to today’s price of ~£240, driving the deal value down significantly. However, I think this collapse in RTHM’s share price presents investors with a win/win/win scenario: no matter how this deal plays out, I think investors are set to benefit from significant share price appreciation. I think there are three likely scenarios:
Let me start with the last scenario (deal falls apart for non-overbid reason), because it’s central to a lot of the other thesis. What happens if the RTHM deal falls apart for some unexplained reason? Well, I’m not sure, though given a relatively concentrated ownership base of activist investors (activist VIEX owns >15% two other activists have filed 13-Ds w/ >5% ownership) I’m sure YUME will quickly look to maximize value (whether that’s trying to sell themselves again or simply forming a more credible standalone plan). But what I like about YUME is the company looks really cheap on a standalone basis. At 9/30/17, the company had roughly $40m in net cash on their balance sheet. That number will likely increase by year end as the bulk of their earnings / cash flow happens in Q4. At a share price of ~$3.60, YUME’s EV comes out below $100m. 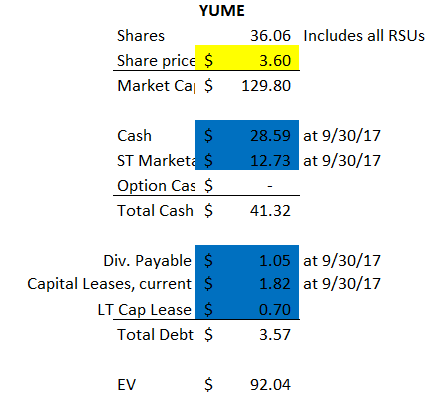 P. 93 of YUME’s F-4 for the RTHM deal included YUME’s projections for the business; I’ve recreated the chart below. It forecasted ~$23m in EBITDA and ~$12m in FCF for 2017. EBITDA and FCF remain broadly similar going forward (FCF in their numbers drop due to WC changes and tax spending; note that they use a 35% tax rate). The projections also forecast continued mid to high single digit revenue growth in 2018-2020. So, at today’s share price, YUME is basically trading for a double digit FCF yield (call it 11% using a $10m FCF number and a $92m EV) if you believe their projections. I’m fine believing them: the earnings number going forward roughly mirrors their trailing earnings, so it’s not like you have to bet on a step function growth in earnings, and, given YUME is a ~50% gross margin business, for EBITDA to stay roughly flat through 2019 as revenue grows at a mid to high single digit rate calls for a lot of investment in SG&A / is probably too conservative.

Does that ~$90m valuation make sense? Tough to say. The companies listed as YUME’s peers in the F-4 are all over the place; Rubicon (RUBI) for example, is trading for a negative EV, while Trade Desk (TTD) trades at around 30x EBITDA (thought Trade Desk is a much bigger company so comparison there is limited; I only use to highlight the multiple difference). YUME’s financial advisor thought YUME was worth 5.0x-7.5x EBITDA, which makes sense to me based on peer multiples and precedent transactions. The low end of that range would imply an EV of ~$115m and a share price of ~$4.34/share after adding back the company’s cash. This makes sense to me at a high level too; it basically values YUME at cash value + a 10% after tax cash flow yield; generally only businesses facing imminent existential threat or serious risk of management burning their money away trade for a worse valuation that that, and neither of those seems likely to me currently.
To sum it up: one of the things I like most about YUME is that, even in a scenario where there was no RTHM deal, I would think YUME is probably undervalued or trading cheap. So our downside here seems reasonably protected.
Let’s now turn to the most likely scenario: the deal with RTHM goes through. If that happens, YUME shareholders will get $1.70/share in cash plus .7325 shares of RTHM (note: RTHM did a share reverse split, so while initial merger release say 7.325 shares the actual number is now .7325. You can check this on p. 87 of the F-4).
At today’s RTHM share price and given current exchange rates, that would represent >$4/share for each YUME share, or a >10% gross return from today’s share price. 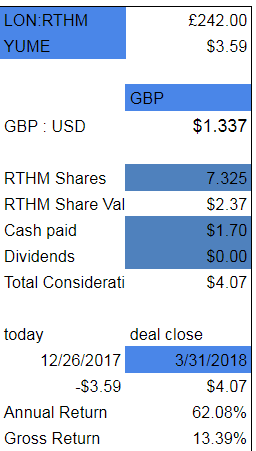 *Note that I’m using a 3/31/18 close date; the offer is set to close sometime in Q1’18 but exact close is TBD. It will probably close sometime in late February but for conservatism I just take the end of Q1.
Of course, this return is dependent on RTHM’s share price, and RTHM is an illiquid London traded stock, so there’s no guarantee an investor is able to sell at a price approaching today’s share price. That’s almost certainly part of the reason this opportunity exists, but I think it’s an opportunity: a >10% spread adjusts for a heck of a lot of illiquidity on selling the stock, and given >40% of the deal value is currently in cash RTHM shares would need to absolutely tank on deal completion for the spread to collapse on deal close /make sense at these levels.
I am going to go into a bit more depth into RTHM’s history and the combined companies’ valuation in part 2 tomorrow. For now, I’ll leave it at this: the history is messy, and RTHM is a roll up story. A roll up story combined with a messy history is a very dangerous combination, so the risks are high. But I’m comfortable with those risks, and (assuming I’m right to be comfortable with them) the combined PF company is quite cheap and likely has substantial upside as their true financials start to shine through.
With tomorrow’s post properly teased, let’s turn to the last scenario: an overbidder comes in for Yume. It’s easy to see the makings of an overbid here- the drop in RTHM’s shares have resulted in a deal value to YUME more than 20% below the initial offer, and a competitor has had the time to see a bit more of YUME’s financials as well as see how much synergy RTHM was forecasting in a deal (~$10m+). Combine all of that with a relatively cheap valuation and you can easily see the makings of an overbid coming. The real reason I think one is possible is the huge synergy number: RTHM is forecasting $10-12m in cost synergies plus potential revenue synergies from combining with YUME. Given Yume’s EV today is ~$90m and RTHM is forecasting just $1m to achieve those synergies, YUME's share price today doesn’t give it value for much more than the value of the cost synergies RTHM will realize from the deal, so RTHM is getting the potential YUME revenue synergies plus YUME’s $20m+ in annual EBITDA for free. A bidder could come and lob in, say, a $4.50 bid and easily top the value of RTHM’s current offer, and it wouldn’t be hard to rationalize that bid- at $4.50, YUME’s valued at $125m EV, which comes out to ~5x LTM EBITDA and ~3.6x LTM EBITDA + $10m in synergies (I have not factored in a $5.5m breakup fee YuMe would owe RTHM if they broke the merger for a superior proposal, but it’s small enough that it doesn’t really change the outcome).
All that said, I don’t think the odds of an overbid are particularly high. The background to the merger is on ~p. 72 and makes it clear that YuMe was very well shopped, and RTHM’s offer was by far the best one (adjusted for dividends, most of the other offers were non-binding in the $3.50-$3.88 range). It’s never a good sign for a company’s value to see that other bids were coming in at an extremely low levels (those bids reflect low single digit EBITDA multiples and are around today’s share price). Again, it’s a risk, but I think part of the reason for low bids can be explained by YuMe’s financials: remember, activists took over the company in late 2016, and YuMe’s financials looked much bleaker when they were taking bids earlier this year (EBITDA in 2016 was <$11m for the full year versus just under $16m in the first 3Qs of 2017). I would not be surprised if bids today would be at a higher level as potential buyers could underwrite the current (much higher) EBITDA levels.
So, to sum it all up, YUME seems to me to be undervalued to fairly valued as a standalone company, so if the deal breaks I don’t see much downside to the shares. If the current merger goes through, there’s significant upside both from the arb spread closing and from the combined company’s low valuation. And there remains the potential for an overbidder to step in.
Some quick odds and ends below