Late last year I posted a two part idea (part 1 and part 2) on the YUME / RTHM (disclosure: long) merger arbitrage. The merger closed earlier this month and I’ve got a few new thoughts so I wanted to do an update post. This update will focus on two things: first, some new fundamental info we got on the combined company, and then some thoughts around just how crazy the trading dynamics were heading into the end of the merger.

A quick recap on the idea: the overall idea was YUME traded at a decent discount to the merger consideration (0.7325 shares of RTHM plus $1.70). I thought the combined company was cheap given the potential synergies from combining the companies, and I also thought YUME was selling somewhat cheap and there was an outside chance it could attract a topping bid.

Let’s start with how things played out. The tender / merger closed in early February. RTHM’s shares traded at ~£265 when the deal closed and, as I write this, RTHM shares are trading at £238, so YUME shareholder got somewhere between $4.14/share (using today’s RTHM share price) to $4.40/share (using RTHM’s closing share price at deal completion). I’ll come back to this point when we discuss trading dynamic but wanted to just quickly summarize how things played out. 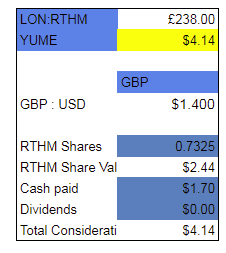 Ok, let’s now turn to the new RTHM’s fundamentals. We’ve gotten two new pieces of info since my last post: the company provided an update that said Q3 was in-line with expectations, and the company filed an update to their YUME offer that included projections for the standalone RhythymOne (excluding YUME). If you’ll recall from the original post, RTHM had bought up several smaller companies and their historical financials were a mess, so it was tough to estimate what their actual profitability level. Given that, the filing of the standalone projections for RTHM is way more important than the Q3 update (though the update is nice too), so I’ve recreated the standalone RTHM projections below.

With that disclosure (plus YUME’s disclosure in the original F-4 projections), we can create a simple proforma model for the combined companies. I’ve done a very simple model below that combines the companies’ projections for revenue, adjusted EBITDA (with and without synergies, which I’ve fixed at $10m, the low end of their targets), and capex. The results are below:

Pretty interesting! That looks even better than the numbers I had backed into in the first post- I had been originally guessing PF EBITDA margins of ~10% with ~4% of sales going to capex, and their projections would have them closing in on 20% margins (after synergies) with less than 3% of sales going to capex. Obviously, these are just projections and things can change rapidly, but if the company comes anywhere close to those numbers shares are going to look insanely cheap in hindsight. The table below uses disclosures from the company’s F-4 to come up with a PF balance sheet (given the majority of earnings are in the back half of the year, I would guess net cash is actually higher today); using 2019 numbers (assuming that’s when they get things fully integrated and ramping up), RTHM is trading for below 4x EBITDA and under 5x pre-tax cash flow.

I’ll admit the math is rough. I haven’t deducted stock comp from their adjusted EBITDA (a very real expense) or taken taxes out of the FCF projection. I’m sure there will be integration expenses, and this is a rapidly changing industry where historical forecasts can be dated at a moment’s notice. Still, the combined company is forecasting high single digit revenue growth and is trading for under 4x EBTIDA / 5x FCF. That is a very strange combination that will not last long. Either RTHM will deliver that growth and shares will rocket higher, or RTHM will not and….. well, it’s not clear what would happen to RTHM then given how low the price /multiple is today.
Just to throw some super loose comparables out there, consider Tremor / Telaria (TLRA) just sold their buyside platform for ~$50m, or just under 0.4x revenues, and that business saw revenue decline by ~20% YoY from 2015 to 2016. The remainco for TLRA is growing quickly but losing money / burning cash; it trades for around 3.5x revenue. The combined RTHM is profitable and growing yet trades for ~0.5x revenue (or around the price of the shrinking TLRA buyside platform), so it feels like we’re already pricing in a pretty drastic scenario for RTHM at today’s valuation / stock price.
The bottom line to me is that RTHM is a messy story, but there are a lot of things suggesting to me that it could be way too cheap currently. I’m holding on to the shares I got through the merger to see if they can come close to delivering on what they are projecting / think they can do.
Ok, fundamental update out of the way, I want to flip gears a little bit and talk about the trading dynamics in YUME. I mentioned earlier that YUME shareholders got proceeds of somewhere between $4.14/share to $4.40/share for their YUME shares when the merger closed. That’s pretty wild given YUME traded for ~$3.70/share for the entire last week it was trading, so the stock market was offering ~10% gross return leading right up to deal close. In fact, YUME traded for a pretty crazy spread for months leading up to the deal close despite no signs or rumors that the deal would fail to close. The chart below shows gross spread for YUME for the ~3 months leading up to deal close. 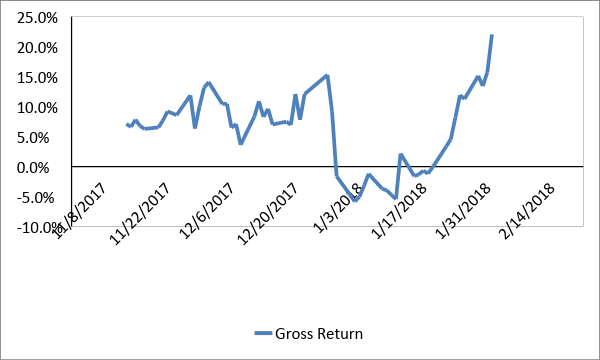 Those are huge spreads for any deal, but particularly for a deal with limited fundamental downside (both peer multiples and unaffected deal price suggested YUME was trading too cheap) and one that was having no regulatory / closing issues (or at least none I was aware of).
Were there reasons for YUME to trade so wide? Perhaps. Both YUME and RTHM were somewhat illiquid, and that illiquidity made hedging the RTHM portion of the deal difficult (so locking in a definitive return was tough). And investors in YUME were buying shares on an American exchange and receiving shares on the London exchange, which raises all sorts of complexities / headaches. So I can certainly understand why some deal spread would exist. But a 10%+ spread in a relatively safe / short dated deal is a huge spread and left a ton of room for RTHM’s share price to drop (and, as discussed above, I thought RTHM shares looked relatively cheap as a standalone).
Anyway, why highlight that weird trading dynamic? A lot of times when I email friends / investors about these strange situations they push back hard saying something like “there must be something wrong with the new company for shares to trade at such a huge spread.” And maybe they’re right and RTHM will collapse in a few quarters. But I wanted to write up the outcome here just as a reminder that quirky / mispriced situations can and do exist.  Normally, the situations come about because there’s something really strange that keeps most investors away. In YUME’s case the thing that kept most investors away was likely illiquidity + a good deal of the value coming from a stock on a foreign exchange that probably wasn’t hedge able, but if you were willing to get somewhat comfortable with the combined company’s valuation, you could feel decently comfortable about investing in the huge spread.
I guess the bottom line (to me) is that if you're flipping enough quirky stones, it's not completely crazy to turn over a few that are mispriced (sometimes even significantly so). I'll try to share one every now and then as I find them, but if you find one in the mean time and want a second set of eyes on it, don't be scared to email me to swap thoughts!

Wondering if you have any current thoughts on BLNKF. Still cheap? Would you buy here? Thanks

Did you get the new shares yet? I got the cash but still havent gotten any shares

unfortunately no screener, just following a bunch of stuff

Can you tell us what's your tips for finding this kind of situation? Do you use a screener or you just keep on flipping stones?