The Death of Malls and the Theft of GGP

At the end of last week’s post (Plagiarism and Adding Value), I mentioned I wanted to discuss an idea from this podcast from Modest Proposal.
The idea I wanted to expand on is the “death of malls” thesis. The basic thought here is simple: there’s no doubt a lot of malls are in trouble (class B and C malls are in a lot of distress, though given the amount of distress I’d guess there’s opportunity for investors with a lot of expertise to buy those on the cheap and redevelop them), but when it comes to Class A malls the thesis is way overblown and presents opportunity for investors willing to look through some negative headlines.
There’s a lot to the “Class A malls are not dying thesis,” but probably the top point is Class A malls are seeing consistent increases in rents (driven by consistent increases in sales per square foot from their tenant base). I think the Macerich slide below does a really nice job of highlighting that point.

Another key point for the thesis is online retailers are increasingly moving into physical retail space (“clicks to bricks”; here’s a nice interview with Warby Parker’s founder discussing it) as they discover opening physical stores can be a cheap form of customer acquisition and boosts online sales. However, they aren’t just moving into any physical space; tenants are picky as they view the stores as part of their brand and need the malls’ traffic to match their target customers, so the online retailers “usually stick with class-A malls in areas with large populations and higher incomes.”
As typically happens with investing, I’m far from the first person to point out that it’s probably unfair to throw Class A malls into the death of malls thesis. Land & Buildings included the slide below in their activist run at Taubman (TCO), and Elliott, Third Point, and Starboard have all explored activist campaigns at Class A mall companies. 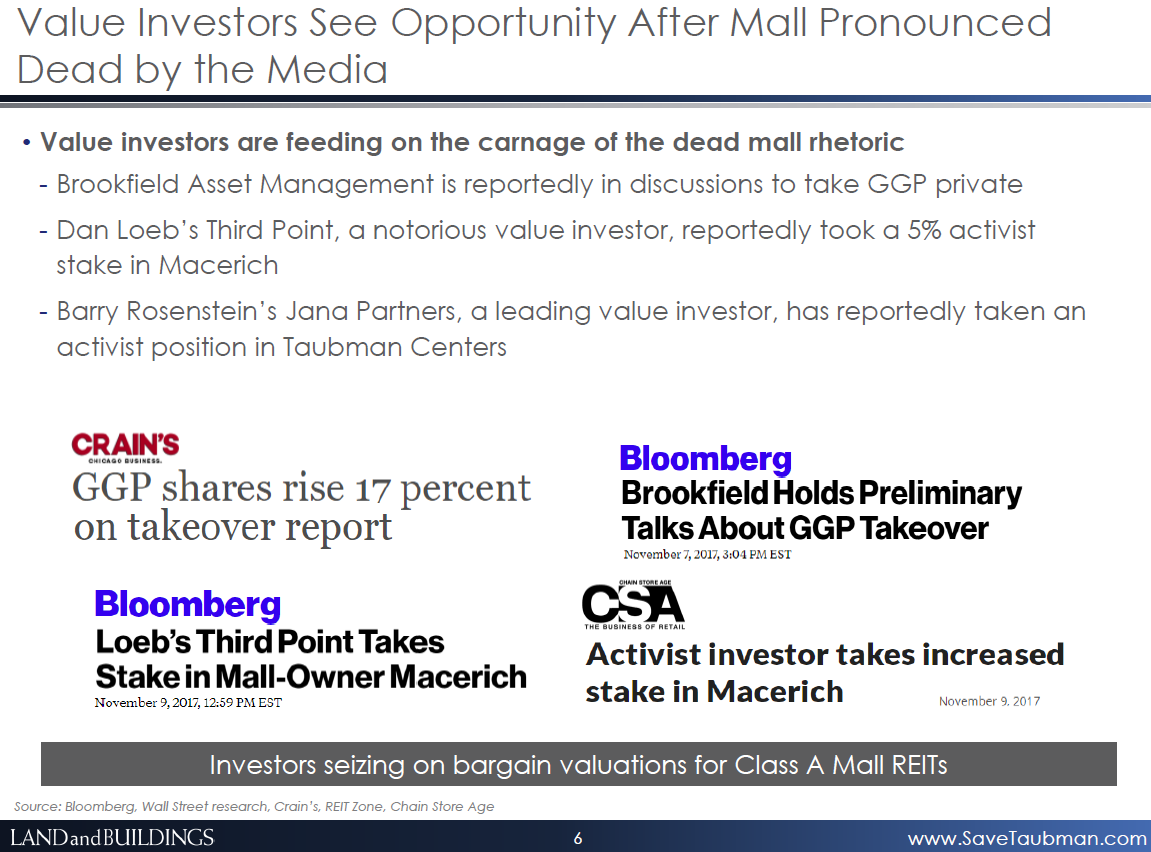 Fast forward to the Q2’17 call in August and the stock is trading just a tick below $22, and the CEO still has pretty strong thoughts on the stock price. Here’s how he opens up the earnings call
“First off, I would like to give you an update on our review of options to create long-term value in our business. Given the significant and inappropriate gap between private and public market values, we thought it was prudent to undergo a strategic analysis in our efforts to maximize shareholder value. The first thing to report is that we have concluded that this franchise has best in class retail. There is also a tremendous amount of embedded value within our portfolio residing in these incredibly well-located urban and suburban infill locations with the ability for greater amount of apartments, condominiums, office, hotels, data centers, co-working gyms, tailors and the like. In that regard, we looked at all options available to us and actively engaged our board in numerous discussions. Given the market conditions and results of our outstanding portfolio, we and the board believe proceeding with our current strategy under the direction of our deep and experienced team will produce the best long-term results for the shareholders. And should a larger opportunity arise, we will, of course, consider in light of our ongoing efforts to maximize shareholder value.”

Later, when asked why they’d publicly announce a strategic process and then not do anything, the CEO responds,
“we felt there was a tremendous disconnect between public and private markets. We felt it was good for us to go out and do a strategic analysis with the board. We did the analysis and we came to the conclusion of, where the stock price is trading today, the best course of action for us is to stay the course. We've also determined that the inherent embedded value in the real estate is so high that you actually do the best for the shareholders. This is not the right time.”
Finally, we come to their Q3’17 earnings call at the end of October, just two weeks before BPY launches their first bid at $23/share. Here’s some select quotes from GGP’s CEO,

“During the quarter, we've remained an active acquirer of our common stock. We acquired 9.3 million shares in an average price of about $21.19, investing a $197 million. We firmly believe that our stock at this price level represents an accretive investment opportunity for our capital allocation activities. We have a 188 million remaining under our Board authorized share repurchased plan.

Anyway, this post is running long, but the trend here is pretty obvious: with their shares trading right around the price BPY eventually agrees to buy GGP out at, GGP has consistently been shouting about how undervalued their shares are.

To sum up: in Brookfield, you have a sophisticated controlling shareholder with a history of successfully buying in industries in distress who is talking about how the see opportunity in retail. In GGP, you have a seller who is constantly shouting about how their intrinsic value is way higher than their share price when their share price is right around the price their controlling shareholder ultimately takes them out for.

I know which side of the trade I’d rather be on. BPY is stealing GGP. 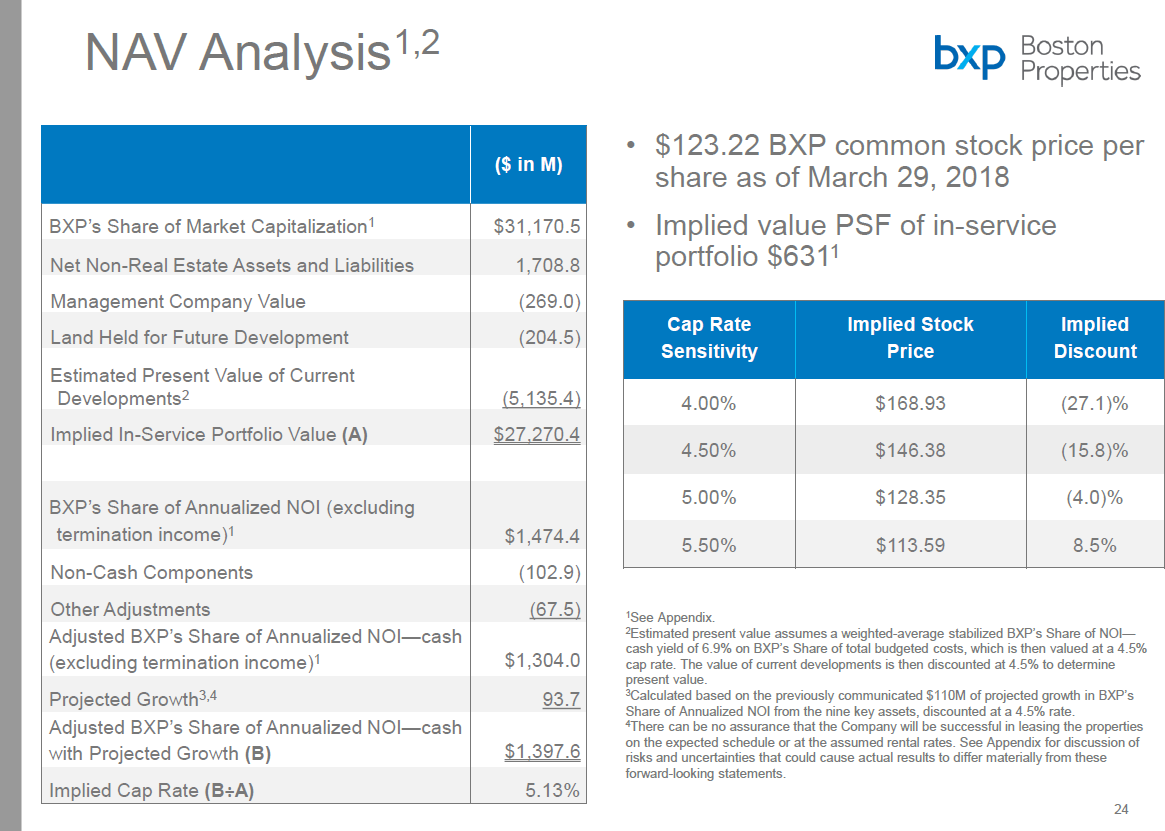